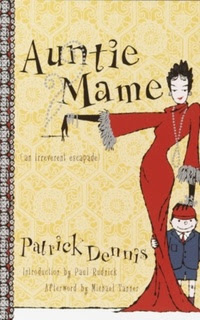 About the book:
Wildly successful when it was first published in 1955, Patrick Dennis's Auntie Mame sold over two million copies and stayed put on the New York Times bestseller list for 112 weeks. It was made into a play, a Broadway as well as Hollywood musical, and a fabulous movie starring Rosalind Russell. Since then, Mame has taken her rightful place in the pantheon of Great and Important People as the worlds most beloved, madcap, devastatingly sophisticated, and glamour aunt. She is impossible to resist, and this hilarious story of an orphaned ten-year-old boy sent to live with his aunt is as delicious a read in the twenty-first century as it was in the 1950s.
Review:
I've always been a fan of the Rosalind Russell film, Auntie Mame, and after recently watching the dreadfully sub-par Mame, starring Lucille Ball, I decided it was finally time to read the book and discover madcap Mame's true story for myself. This book is absolutely hilarious, hands-down one of the funniest, most charming books I've ever read. The Rosalind Russell film is a gem, but the book takes everything wonderful about the film and multiplies it about ten times over. The book is quite a bit more *cough* bohemian than what would've been allowed in a 1950's film. It isn't a straight, linear story - instead it's eleven chapters cover various episodes over the course of Patrick's life as he grows up with his rather unconventional aunt. This device helps make the book an extraordinarily fast read - as soon as one escapade is finished, you want to dive right into the next. Each episode is "framed" by Patrick reading about the "Unforgettable Character" in the Digest, prompting him to compare the Digest's Unforgettable Character with his own Auntie Mame. Patrick reminsces his way through life with Mame in the glittering Roaring Twenties, surviving the Great Depression, her marriage and widowhood, World War II, and my favorite episodes - Patrick's "punctured romance" with the snobbish Gloria Upson and Mame's "golden years" when she starts to long for Patrick to settle down and have kids. The heart of the story is Patrick's relationship with Mame - as he gets older he may get a little more frustrated with Mame's unconventional ways, but underneath it all the one thing that never changes is their love for each other. Auntie Mame is the perfect balance of laugh-out-loud comedy and heart-tugging, genuine emotional depth. HIGHLY recommended.
Posted by Unknown at 2:52 PM

Sounds good. I'm going to have to dig out my copy and finally read it. =}

@Jen - It's a fast read, you'll zip right through it in no time flat.