As I promised yesterday, today I'm thrilled to share an exclusive excerpt from Ross Poldark with you as part of the Ross Poldark Blog Tour! Following the excerpt, read on for information on the blog tour giveaway hosted by Sourcebooks Landmark. Enjoy! 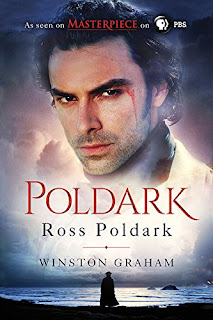 Excerpt from Chapter 2 of Ross Poldark:

Ross came into a company quite unprepared for his arrival. When his figure showed in the doorway, one after another of those at the table broke into words of surprise. Elizabeth and Francis and Verity and Dr. Choake were on their feet; Charles lay back grunting and inert from shock. Cousin William-Alfred polished his steel spectacles, while Aunt Agatha plucked at his sleeve mumbling, “What is it? What’s to do? The meal isn’t over.”

Ross screwed up his eyes until they grew used to the light. Trenwith House was almost on his way home, and he had not thought to intrude on a party.

First to greet him was Verity. She ran across and put her arms around his neck. “Why, Ross dear! Fancy now!” was all she could find to say.

“Verity!” He gave her a hug. And then he saw Elizabeth.

“Stap me,” said Charles. “So you’re back at last, boy. You’re late for dinner, but we’ve some apple tart left.”

Francis, after a short hesitation, came quickly around the table and grasped the other man’s hand. “It’s good to see you back, Ross! We’ve missed you.”

The color of the eyes under the same heavy lids was the only mark of cousinship. Francis was compact, slim, and neat, with the fresh complexion and clear features of handsome youth. He looked what he was: carefree, easy-going, self-confident, a young man who has never known what it was to be in danger or short of money, or to pit his strength against another man’s except in games or horse-play. Someone at school had christened them “the fair Poldark and the dark Poldark.” They had always been good friends, which was surprising, since their fathers had not.

“This is a solemn occasion,” said Cousin William-Alfred, his bony hands grasping the back of his chair. “A family reunion in more than name. I trust you’re not seriously wounded, Ross. That scar is a considerable disfigurement.”

“Oh, that,” said Ross. “That would be of no moment if I didn’t limp like Jago’s donkey.”

He went around the table greeting the others. Mrs. Chynoweth welcomed him coldly, extending a hand from a distance.

“Very like us, ma’am. That’s why we lost it.” He had reached Elizabeth.

His eyes feasted on her face. “This is most opportune. I couldn’t have wished it different.”

“And what are you going to do now, my lad?” asked Charles. “It’s high time you settled down. Property don’t look after itself, and you can’t trust hirelings. Your father could have done with you this last year and more—”

“I almost called to see you tonight,” Ross said to Elizabeth, “but left it for tomorrow. Self-restraint is rewarded.”

“Why,” said Aunt Agatha, “Lord damn me if it isn’t Ross! Come here, boy! I thought you was gone to make one of the blest above.”

Reluctantly Ross walked down the table to greet his great-aunt. Elizabeth stayed where she was, holding the back of her chair so that her knuckles were whiter even than her face.

Ross kissed Aunt Agatha’s whiskery cheek. Into her ear he said, “I’m glad to see, Aunt, that you’re still one of the blest below.”

She chuckled with delight, showing her pale brownish-pink gums. “Not so blest, maybe. But I wouldn’t want to be changing just yet.”

The conversation became general, everyone question-ing Ross as to when he had landed, what he had done and seen while away.

“Elizabeth,” said Mrs. Chynoweth, “fetch me my wrap from upstairs, will you? I am a little chilly.”

“Yes, Mother.” She turned and walked away, tall and virginal, groped with her hand for the oak banister.

“That fellow Paynter is a rogue,” said Charles, wiping his hands down the sides of his breeches.

“If I was you I should throw him out and get a reliable man.”

Ross was watching Elizabeth going up the stairs. “He was my father’s friend.”

Charles shrugged in some annoyance. “You won’t find the house in a good state of repair.”

“Well, it’s worse now. I haven’t been over for some time. You know what your father used to say about coming in the other direction: ‘It is too far to walk and not far enough to ride.’”

“Eat this, Ross,” said Verity, bringing a piled plate to him. “And sit here.”

Ross thanked her and took the seat offered him between Aunt Agatha and Mr. Chynoweth. He would have preferred to be beside Elizabeth, but that would have to wait. He was surprised to find Elizabeth there. She and her mother and father had never once been to Nampara in the two years he had known her. Two or three times he glanced up as he ate to see if she was returning.

Verity was helping Mrs. Tabb to carry out some of the used dishes. Francis stood plucking at his lip by the front door; the others were back in their chairs. A silence had fallen on the company.

“It is no easy countryside to which you return,” said Mr. Chynoweth, pulling at his beard. “Discontent is rife. Taxes are high, wages have fallen. The country is exhausted from its many wars, and now the Whigs are in. I can think of no worse a prospect.”

“Had the Whigs been in before,” said Dr. Choake, refusing to be tactful, “none of this need have happened.”

Ross looked across at Francis. “I’ve interrupted a party. Is it in celebration of the peace or in honor of the next war?”

Thus he forced the explanation they had hesitated to give.

“We are celebrating something far different,” said Charles, motioning for his glass to be filled again. “Francis is to be married. That is what we’re celebrating.”

Ross put down his knife. “To—”

“Can I get you something to drink?” Verity whispered to Elizabeth, who had just reached the bottom of the stairs.

“We are very happy,” said Mrs. Chynoweth, “that our two ancient families are to be united. Very happy and very proud. I am sure, Ross, that you will join with us in wishing Francis and Elizabeth all happiness in their union.”

Win One of Three Fabulous Prizes

In celebration of the re-release of Ross Poldark and Demelza, Sourcebooks Landmark is offering three chances to win copies of the books or a grand prize, an Anglophile-themed gift package.

Two lucky winners will each receive one trade paperback copy of Ross Poldark and Demelza, and one grand prize winner will receive a prize package containing the following items:

To enter the giveaway contest simply leave a comment on any or all of the blog stops on the Ross Poldark Blog Tour starting July 06, 2015 through 11:59 pm PT, August 10, 2015. Winners will be drawn at random from all of the entrants and announced on the Buzz at Sourcebooks blog on August 13, 2015. Winners have until August 20, 2015 to claim their prize. The giveaway contest is open to US residents and the prizes will be shipped to US addresses. Good luck to all!

Click HERE or HERE for a list of all stops on the tour. Good luck!
Posted by Unknown at 4:58 AM

These books and this giveaway sound awesome!

I remember watching this scene in the TV series. Love the show and can't wait to read the books!

That's a wonderful scene! Really lays out the major tensions of the novel beautifully. I like the contrast between Ross and Francis, and it also shows Verity as the heart of the family.

Loved that you included an excerpt! Great choice of scene too. Definitely will be looking into reading the books now! :)

Great excerpt choice! Scene from the show as well! I'll admit, I hadn't heard of the books until the release of the show, but I pretty much love anything PBS airs! Thanks for the awesome giveaway! Will there be different excerpts at each stop or was that your choice for your highlight?

The TV series is my favorite of the summer, I haven't seen the original so it is all new to me. I'd love to read the books.

I read these books so long ago! Looking forward to a reread.

I'm thinking I want to read the books as well as watch the series on TV. This is the first time I've seen Aiden Turner and he is outstanding as this character. Great giveaway! Thanks.

I love this scene in the books and the BBC/PBS series. It is a great opener. The book are fab and I hope to hear your thoughts about them in the future Ruth. best, LA

I love this scene in the books and the BBC/PBS series. It is a great opener. The book are fab and I hope to hear your thoughts about them in the future Ruth. best, LA

Thanks for the excerpt!

Oh, my. The poor man. I need to read the books and watch the series. What a generous give away.

I am loving the series and the excerpt shows the books are every bit as entertaining. Thanks for sharing that excerpt!

One of our "must see" shows this summer. My daughter doesn't miss it. Would love to read the books & serve tea with the cups. :) Thanks for the awesome giveaway chance.
Carol L

Ugh! I NEEEEEED to read this series like yesterday! As you know I'm totally obsessed with both TV series'! 😊

I too have been watching the new show and am enjoying it but would like to read the books as well.

An amazing giveaway.I would love these books. Such an amazing show. Thanks for the excerpt & the giveaway.,
Carol L
Lucky4750 (at) aol (dot) com

I appreciate your hosting, lovelyyyyyyyyy

The new series is so much improved over the last one.
Ann

Loving this Poldark! Have read the first two books on my Kindle but would love to have printed copies! Thank you for the giveaway opportunity!

What a heart-stopping moment in time!

Love the excerpt! Thanks for the giveaway. :)
caliwillette(at)gmail(dot)com

I have been watching the Masterpiece series and have started following the book tour. It is very interesting to read the different reviews. Thank you for the chance to win.
cjay(at)iavalley(dot)edu

I loved the show and I want to read the books!
cricketlady29@hotmail.com

This show has me absolutely hooked! Dying to get my hands on the books! Such a great giveaway, thanks for posting!

I haven't read the books, but I've thoroughly enjoyed the PBS series!

I really love this series! Would love this prize pack!
donnyandshelly at yahoo dot com

my daughter & I love this series and are really anxious to read the novels. We would love to see them all win awards!