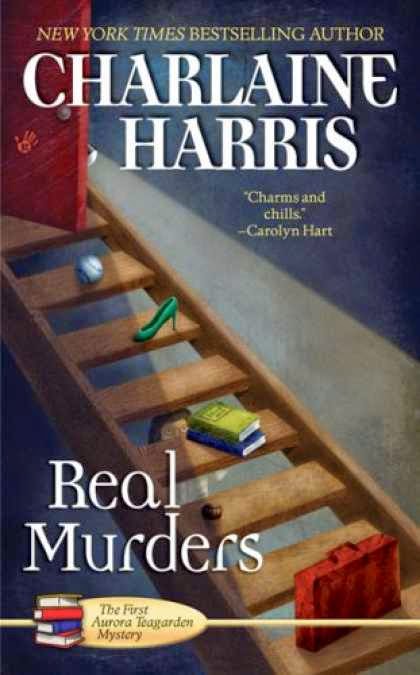 I must confess, I'd never even heard of Aurora Teagarden until I started seeing advertisements for a new film on the Hallmark Movies & Mysteries channel (which is kind of my default "background noise" station, because seriously can you ever have too many Murder She Wrote re-runs? No, obvs...). And even then, nothing in the trailer clued me into the fact that it was a book series, until I finally did a google search on the name and discovered that not only was the upcoming film inspired by a series of books, but the main character was a LIBRARIAN. My book loving heart was overcome -- this is total cozy mystery catnip for the likes of me, people!

Real Murders is the first installment of Aurora's sleuthing adventures, and it is so 1990s it was giving me all the nostalgic feels. No internet! Phones on CORDS attached to WALLS! Not to mention Aurora's fashion sense. *wink* Aurora (also called Roe) is all of 4'11" with coke-bottle glasses and a mass of hair she usually keeps tame with a braid...quiet and bookish and perfectly ordinary. She's content with her lot in life until her existence is upended with a terrifying splash of murder, the likes of which she's only found in her true crime books. Her passion for history and mystery met its outlet in the Real Murders Club, a diverse group of locals who met once a month to discuss a historical murder case or related crime-solving topic. But when one of the club members turns up dead, the body staged to mimic that meeting's topic -- the Julia Wallace murder -- Roe's amateur passion for murder casts an unwelcome and all too real shadow over her carefully ordered life. Soon the perpetually-single Aurora is juggling not one but two potential boyfriends, all while wondering which member of her criminally savvy fellow club members decided to take their passion for history's more gruesome chapters and bring it to life in her hometown...and where, and how, would they strike next?

If you're craving the mystery equivalent of comfort food, Real Murders contains all the ingredients to satisfy one's craving for a mystery cozy -- a plucky heroine, a quirky small town, a dash of romantic possibility, and a few red herrings. Roe is a likable lead, if not particularly well-rounded, and the supporting players are typical of the assortment that normally populates stories of this ilk -- the flirt, the jock, etc. While not particularly groundbreaking Real Murders is an altogether pleasant way with which to while away a few hours. It may lack some of the finesse of a Christie novel, but it more than makes up for any predictability with its action-packed final act. This series has promise, and its premise makes it perfect material for a series of telefilms, all guaranteeing I'll revisit Aurora's world soon!

Though a small town at heart, Lawrenceton, Georgia, has its dark side-and crime buffs. One of whom is librarian Aurora "Roe" Teagarden, a member of the Real Murders Club, which meets once a month to analyze famous cases. It's a harmless pastime-until the night she finds a member killed in a manner that eerily resembles the crime the club was about to discuss. And as other brutal "copycat" killings follow, Roe will have to uncover the person behind the terrifying game, one that casts all the members of Real Murders, herself included, as prime suspects-or potential victims.
Posted by Unknown at 2:50 PM