Review: Ruined by a Rake by Erin Knightley 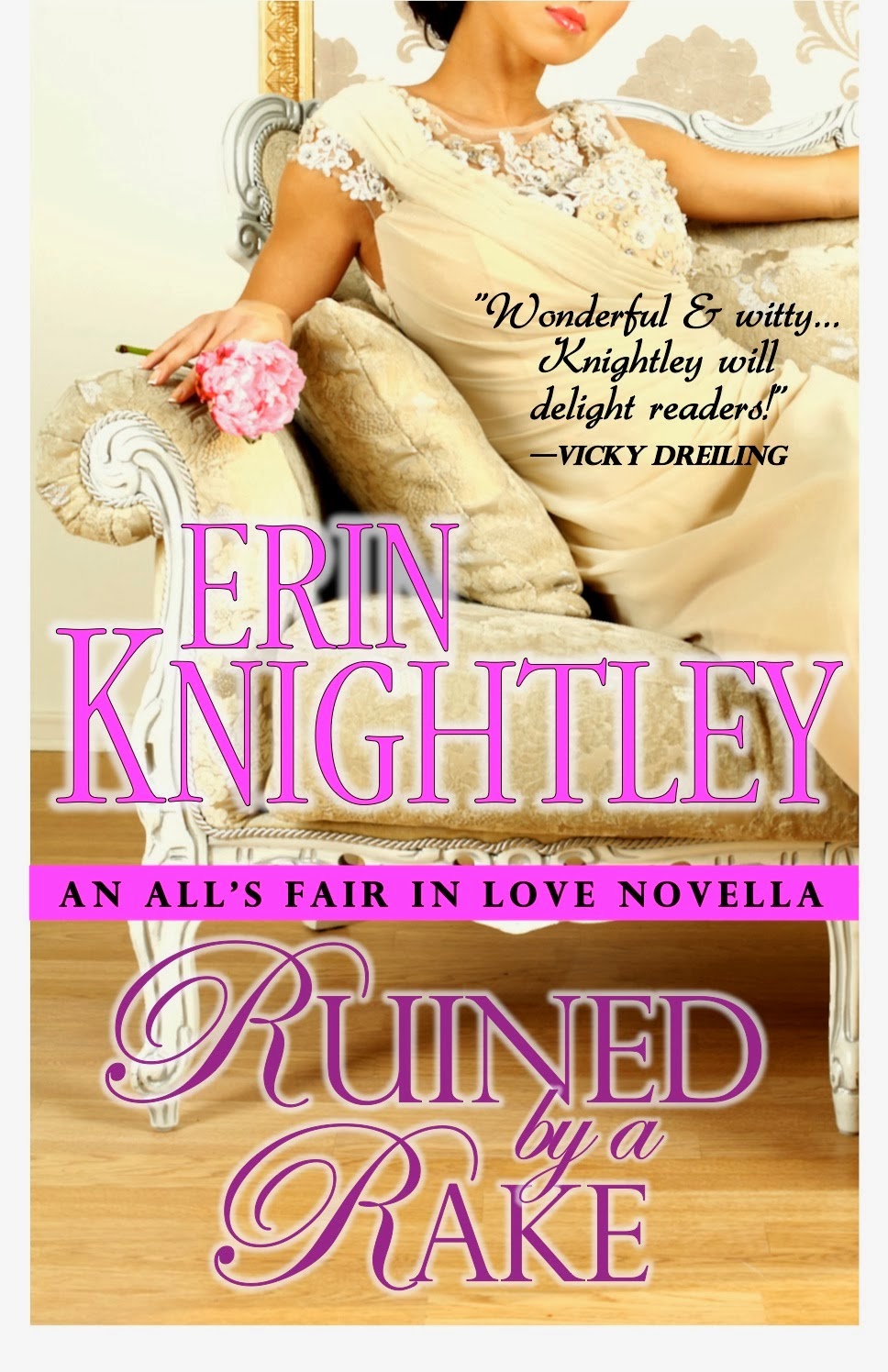 Eleanor's introduction to her step-cousin Nicolas did not have an auspicious beginning. At the age of seven, a full two years younger than her, the boy had the temerity to steal a kiss upon their introduction, an embarrassment that branded him forever as a thorn in her side. Their relationship grew increasingly combative until Nicolas taught Eleanor to fence, their frequent -- and secret -- bouts providing an outlet for their mutual irritation. While not serving to ingratiate her cousin into her good graces, the fencing lessons did, at least, allow Eleanor to tolerate Nicolas's presence in her life. But two years ago, the annoying boy who had so long been the bane of her existence left to assume a military commission, and Eleanor forgot her longstanding tormentor as her life became consumed by the loss of her beloved mother.

After witnessing the toll her parents' tumultuous marriage wreaked on her family, Eleanor determines to embrace spinsterhood at twenty-four and never marry. But her resolution is tested all too soon when she re-enters society and her uncle Malcolm determines to use his eldest niece as a pawn in his political machinations. Horrified, Eleanor refuses, but when Malcolm threatens to impose his will on her younger sister instead, she is well and truly trapped. Her only distraction is Nicolas's return, now a dashing soldier who bears little resemblance to the annoying prankster of her youth. Could it be that her one-time adversary is just the man she needs to help foil her uncle's plans? Or will her old prejudices blind her to the truth Nicolas has always known -- that they are a perfect match.

Novellas can be a hit-or-miss proposition -- a good one can provide a serviceable introduction to a new author's writing style, while a poorly-conceived effort can kill any interest I once may have held in a full-length book. But even rarer is the novella that provides a wholly satisfying story on its own, with tension, humor, and a swoon-worthy romance. Happily, amazingly, Ruined by a Rake delivers on all fronts, turning me into an instant Erin Knightley fan, eager to explore her backlist! The adversaries-to-lovers romance trope is a classic for a reason -- who doesn't love the sparks that fly when to individuals who are absolutely perfect for each other can't see the truth right before their eyes? Julia Quinn (The Viscount Who Loved Me) and Loretta Chase (Lord Perfect) are two masters of the genre and the formula -- and to find a storyteller whose work delivers ALL THE FEELS of a master in a novella? One cannot help but take notice!

Knightley imbues what could otherwise be a formulaic, by-the-numbers storyline with a refreshing energy. Not only were Eleanor and Nicolas raised as step-cousins, Eleanor is two years senior, and for years has relegated Nicolas to the position typically occupied by bratty, annoying younger siblings. Knightley does a fantastic job sketching their tension-fraught relationship, particularly in how Nicolas isn't even on Eleanor's radar. Not only is he younger, but she's predisposed to avoid all thoughts of marriage thanks to the tensions she witnessed in her parents' relationship. This is a woman determined to forge her own path in life, and it is her independent spirit that draws Nicolas to her first and foremost and that which he seeks to support and enable, rather than control.

While the length constraints of the novella format make Eleanor and Nicholas's journey to a happily-ever-after somewhat rushed, Knightley is careful to sprinkle hints of their history of mutual annoyance throughout the story, ensuring that the emotional payoff, when it comes, is sweet and well-earned. Over the course of just eight slim, tightly-plotted chapters, I fell head-over-heels for Knightley's writing. It's replete with the humor and spark I adore in favorite romance authors like Quinn, Chase, and Kate Noble, with a sweetness all its own. This is a heart-melting romance with nary an impropriety in sight -- a refreshing change of pace from mainstream offerings, and all the more delightful because Knightley's characterizations truly shine. I cannot wait to dive further into her backlist, and am particularly eager to see how she handles the freedom afforded in full-length fiction.

It started with a kiss.

When nine-year-old Eleanor Abbington first met her uncle’s new stepson, Nicolas Norton, the boy rudely stole a kiss from her that set the tone for their contentious and competitive relationship. It wasn’t until years later when Nick introduced her to fencing that they finally had a proper outlet for their frequent arguments.

Having just emerged from mourning following her mother’s death, Eleanor is exactly where she wishes to be at the age of four-and-twenty: an on-the-shelf spinster and unofficial companion to her aunt. Unfortunately, her ambitious uncle has other plans for her future. On the eve of his house party, he lays down his ultimatum: either Eleanor marries the man of his choosing, or he'll force her seventeen-year-old sister to do so instead.

When Nick unexpectedly arrives on their doorstep after a two year absence, Eleanor is in no mood for their normal banter. Seeming to know exactly what she needs, Nick challenges her to pick up the foil once more. During their pre-dawn matches, he shows her just how strong she can be . . . and exactly how much he’s changed since leaving. But when her old adversary becomes her only ally, she may very well find herself . . . Ruined by a Rake.
Posted by Unknown at 4:20 PM