Review: And Only to Deceive by Tasha Alexander 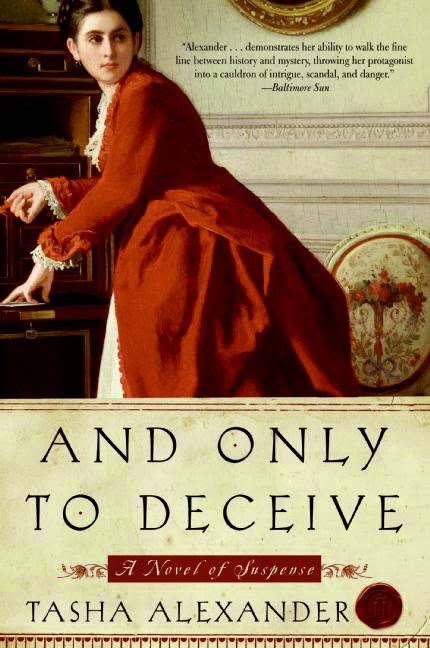 And Only to Deceive (Lady Emily #1)
By: Tasha Alexander
Publisher: HarperCollins
ASIN: B000OI0E0Y

Lady Emily Bromley married Philip, the Viscount Ashton, not for his good looks or fortune, but to escape her overbearing mother's attempts to control every facet of her life. Love, least of all, played no part in her marriage equation. For while she had more interest in her books, a well-bred woman in Victorian England was expected to marry, and to marry well -- and so when Philip offered, she accepted. Six months later, Emily found herself a widow, thrown into the elaborate and socially expected mourning rituals of the day for a man she barely knew, let alone really, truly, grieved. It's only as she finally enters half-mourning, when at long last gray could begin to replace her black mourning crepe that Emily begins to understand that the man she married was wholly different from the one she thought she knew. Philip loved his hunting, yes, but it is his best friend, the handsome Colin Hargreaves, who first opens Emily's eyes to her husband's academic passions and even more shocking, the idea that he may have really, truly, loved her.

As a wealthy widow, Emily now as the resources and freedom to pursue her own interests, and using her husband's journals and antiquities collection as a starting point, she begins her own socially unorthodox -- but oh so personally gratifying -- academic pursuits. But as she delves into the world of Homer, Greek antiquities, and academia, the unthinkable occurs -- Emily begins to fall in love with her husband. The more she gets to know Philip through his writings and friends' reminiscences, the deeper her regret cuts at not having put more effort into her marriage when she had the chance. As she becomes an amateur expert in Philip's field of antiquities, she makes a terrifying discovery -- someone has been replacing priceless artifacts in the British museum with fakes, and several of the items in her husband's collection prove genuine. With their provenance in question, Emily fears the man she learned to love too late will prove a thief, and if not, a victim of men willing to go to any length to achieve their unscrupulous aims...

Tasha Alexander's Lady Emily series has been on my radar for several years now, and when the first installment was keenly-priced on Amazon I couldn't resist finally meeting her aristocratic lady sleuth. I am always eager to meet new, smart, and intelligent heroines, and the Victorian-setting within the pages of Alexander's debut is one rife with possibilities -- a period characterized by great scientific and intellectual advancements as well as a strict moral and social code. By positioning Emily as a wealthy widow, Alexander has gifted her heroine with an extraordinary amount of relative freedom, an ideal situation for an amateur sleuth. There is an authenticity to the almost leisurely manner at which Emily's intellectual awakening unfolds; however, the flip side is the glacial pace of the novel, stalling any forward plot momentum and character development. A full two-thirds of the story is devoted to Emily's educational pursuits, which, while admirable, are meted out with a pedantic tone that turns the story into an intellectual exercise rather than a compelling character study.

The pacing picks up when Emily makes the shocking discovery that her husband's antiquities collection contains genuine, priceless artifacts, the knowledge threatening to topple Philip from the pedestal on which she'd installed him in memoriam. While Emily's intellectual pursuits to this point are gratifying and empowering, it isn't until she starts to research the questionable provenance of her inheritance, exercising her intellect and free will, finally hinting at a character with the moxie and smarts to actively challenge convention. Prior to this juncture, she's toyed with the concept, attending lectures and (horrors!) professing a preference for brandy rather than sherry, but there was a naivete to her approach to freedom that quickly grew stale. Yes, the social expectations and restrictions she encountered were real, but her response to resistance too often reads as childish rather than focused -- there is a lack of balance in her swings from one extreme to the next that came off as initially more immature than compelling.

The promise of a widow coming to know and love her husband through his writings intrigued me, and the one-sided love affair is one of the more intriguing aspects of Emily's introduction that sets her apart from other sleuths of her ilk (i.e., Raybourn's Lady Julia). However, in the end I think Alexander took the conceit too far, as Emily's headlong obsession with building a one-sided, post-death "relationship" of sorts with Philip reaches its inevitable conclusion of going exactly nowhere. Yes, he is a critical catalyst for Emily's intellectual and personal "awakening," but the scant journal excerpts aren't lengthy or compelling enough to warrant siding with Emily's rose-colored view of Philip. The contrast is especially stark when her two new, would-be suitors are introduced -- Colin and Andrew. Both men have their secrets, but Colin's pursuit of Emily possesses such a maturity that it is frankly maddening every time she spurns him for Andrew.

But, personal preferences aside, Emily's relationship with the men in her life charts a clear trajectory of her emerging maturation. As a first novel and an introduction to Emily's world, Alexander has delivered a serviceable storyline that hints at the possibility of greater, more compelling characterization to come -- a possibility that I hope bears out in subsequent volumes of this long-running series. While the glacially-slow plotting and characterization issues didn't leave me eager to read the sequels, Colin's promise to Emily -- wherein he tells her he only wants to "complement a life you already find perfectly satisfying" -- gives me hope that subsequent installments take this budding relationship of true intellectual like minds on deeper and more satisfying adventures. The intellectual slant of Lady Emily's character sets her apart, and I have high hopes that further volumes have seen the formula polished and the character's potential hitting the right balance between intellectual and historical authenticity and compelling storytelling.

For Emily, accepting the proposal of Philip, the Viscount Ashton, was an easy way to escape her overbearing mother, who was set on a grand society match. So when Emily's dashing husband died on safari soon after their wedding, she felt little grief. After all, she barely knew him. Now, nearly two years later, she discovers that Philip was a far different man from the one she had married so cavalierly. His journals reveal him to have been a gentleman scholar and antiquities collector who, to her surprise, was deeply in love with his wife. Emily becomes fascinated with this new image of her dead husband and she immerses herself in all things ancient and begins to study Greek.

Emily's intellectual pursuits and her desire to learn more about Philip take her to the quiet corridors of the British Museum, one of her husband's favorite places. There, amid priceless ancient statues, she uncovers a dark, dangerous secret involving stolen artifacts from the Greco-Roman galleries. And to complicate matters, she's juggling two very prominent and wealthy suitors, one of whose intentions may go beyond the marrying kind. As she sets out to solve the crime, her search leads to more surprises about Philip and causes her to question the role in Victorian society to which she, as a woman, is relegated.
Posted by Unknown at 1:22 PM