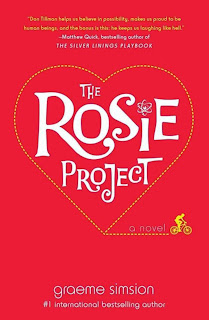 Don Tillman, a brilliant but socially challenged genetics professor, is at a loss as to why he -- a prime specimen of mental and physical fitness, with an above average income, should find himself still single at the age of thirty-nine. Previous attempts at finding a life partner, while attempting to operate within society's accepted norm, a.k.a. the "traditional dating paradigm," had only led to unmitigated calamities such as The Apricot Ice Cream Disaster with Elizabeth the computer scientist -- an encore of such horrors to be avoided at all costs. Such forays into traditional mating "rituals" having proved to be complete wastes of time, money, and his not inconsiderable intellectual resources, and so Don has abandoned his search.

Thus resigned to his single state, Don is relatively content, until a chance opportunity to speak on the subject of Asperger's Syndrome opens his eyes to the possibility of approaching the dormant Wife Project rationally and scientifically. The result is a sixteen-page survey designed to eliminate those deemed incompatible -- the drinkers, smokers, picky eaters, chronically late, and otherwise intellectually lacking and therefore wholly unsuitable as long-term candidates for Don's project. With the scientific rubrics in place, Don is sure of long-term, scientifically validated success until Rosie Jarman walks into his office. Rosie is ostensibly a Wife Project applicant, but one also in search of her biological father -- the latter a quest Don is imminently suitable with which to assist. As Don gets to know Rosie, it quickly becomes clear that she is the antithesis of the ideal candidate the Wife Project questionnaire was designed to uncover -- and Don is forced to confront the idea that the most unsuitable woman in the world might just be his perfect match.

People, READ THIS BOOK. The last time I found myself so utterly captivated by an unconventional romance was Rainbow Rowell's Attachments -- and to those of you who've read and loved that novel as I do, make of that comparison what you will. *wink* Author Graeme Simsion takes his background in IT consulting and screenwriting to craft a fast-paced, charming debut novel as full of unabashed romantic heart as it is of the scientific precision with which Don constructs and lives every aspect of his life. And much like Don, pre-Rosie, Simsion's prose and plotline are crafted with a laser-like precision -- this is a textbook romantic comedy that manages to hit all the requisite story beats while remaining wholly fresh and unique thanks to Don's delightfully prickly and precise personality.

Rosie describes Don resembling Gregory Peck in To Kill a Mockingbird -- if only he had the right glasses and haircut. And while I may never recover from the swoon induced by the mental image of an endearing, socially-challenged Gregory Peck, for what it's worth in my mind Don most closely resembles Sheldon Cooper from The Big Bang Theory, with a slightly less acerbic wit and a touch more warmth. Don wants to figure out this puzzle called life -- he'd like to better navigate society's murky waters, but without the emotional component or drive serving as an impetus to do so, he's at a loss...until he meets Rosie.

And therein lies the genius of Simsion's characterization -- The Rosie Project isn't about "fixing" people, or excising everything that makes Don a wholly, wonderfully unique individual. It is the story of one man whose genetic make-up conditions him to view the world through a rational, scientific lens, meeting a woman whose fractured home life has conditioned her to view it through an emotional lens -- and finding in their relationship and polar opposites personalities a connection, validation, and support that complements one to the other. We're all flawed in some respect, and perhaps the greatest danger lurks in buying into the lie that society's perfect standard, if unmet or unrealized, equals some sort of human failure. As Don learns on his roller-coaster journey, change -- equal parts terrifying and exhilarating -- is possible for even the most recalcitrant member of the human race.

I find myself equal parts intrigued and terrified at the thought of Hollywood turning this charmer of a novel into a film -- but Simsion has done his part by providing a detailed road map for the transition of Don's story from page to screen. Rarely is a novel so perfectly suited for film, as The Rosie Project is essentially the classic screwball romantic comedy in novel form. This is the rare story that hits all the beats of the format -- from the "meet cute" (here, the infamous Jacket Incident) through the resolution/joyful defeat without feeling the least bit tired or over-done. Don's status as a romantic hero operating from the high-functioning end of the autism spectrum brings a freshness, warmth, humor, and unexpected vulnerability to the page. This is a story that is a stark, gorgeously-rendered reminder of what it means to be human, of the beauty and pain that make up life in equal measure. The Rosie Project is a warm, humorous, always honest, occasionally heart-rending tale of love found, nearly lost, and found again between two of the most perfectly imperfect and -- on paper, at least -- incompatible characters one could hope to meet. A charming, life-affirming, hope-filled romance, Simsion's debut is as much a love letter to life as it is a beautifully-crafted romance between an atypical hero and his maddeningly wrong "perfect" match. This novel is an absolute gem, and I cannot wait to see who Simsion introduces to readers next.

THE ART OF LOVE IS NEVER A SCIENCE

MEET DON TILLMAN, a brilliant yet socially challenged professor of genetics, who’s decided it’s time he found a wife. And so, in the orderly, evidence-based manner with which Don approaches all things, he designs the Wife Project to find his perfect partner: a sixteen-page, scientifically valid survey to filter out the drinkers, the smokers, the late arrivers.

Rosie Jarman is all these things. She also is strangely beguiling, fiery, and intelligent. And while Don quickly disqualifies her as a candidate for the Wife Project, as a DNA expert Don is particularly suited to help Rosie on her own quest: identifying her biological father. When an unlikely relationship develops as they collaborate on the Father Project, Don is forced to confront the spontaneous whirlwind that is Rosie—and the realization that, despite your best scientific efforts, you don’t find love, it finds you.

Arrestingly endearing and entirely unconventional, Graeme Simsion’s distinctive debut will resonate with anyone who has ever tenaciously gone after life or love in the face of great challenges. The Rosie Project is a rare find: a book that restores our optimism in the power of human connection.
Posted by Unknown at 3:56 PM

This sounds cute! I saw a report on Nightline or one of those news shows about a woman who did something similar with online dating.

You're right. I'm thinking I need to read this.