Review: Don't Want to Miss a Thing by Jill Mansell 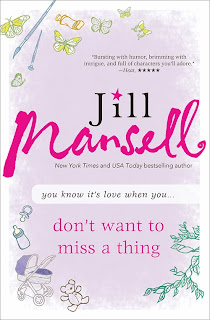 With a high-paying job and good looks and charm to spare, Dexter Yates epitomizes the life of a carefree London bachelor. Addicted to the thrill of the chase, once a woman succumbs to his charm he quickly loses interest, leaving him with a reputation of something of a heartbreaker. The only stability in Dexter's personal life comes in the form of his beloved older sister Laura and her newborn daughter, Delphi -- the only women in his life of whom Dexter will never tire. When tragedy strikes, Dexter is left reeling and faces a shocking choice -- grieving his sister's death and returning to the freewheeling emptiness of the life he's always led, or forsaking his playboy ways and honoring his sister's wish to raise Delphi as his own. Taking a leap of faith Dexter applies for guardianship and gives up his flat in London for a cottage in the quiet village of Briarwood. But although Delphi has capture his heart, the challenges of raising an infant alone -- in the midst of his grief -- threatens to derail Dexter's best intentions. Can the man who strove to avoid commitment of any sort find the courage to commit to his niece, and in the process find a love worth fighting for?

Molly Hayes's love life is a series of disasters, and after her latest messy break-up she resolves to forswear men -- at least temporarily -- and concentrate on her art. The genius behind a popular comic strip, she loves the quiet atmosphere Briarwood provides, allowing her to focus on her work and teach aspiring artists at the local cafe. But the day she lobs an unwanted fish into Dexter's backyard, her resolve to avoid romantic entanglements is put to the test the moment she sees the playful glint in her handsome new neighbor's eyes. As the months pass, Molly and Dexter find themselves forming an unorthodox family, but when the local doctor sets her sights on winning Dex, Molly is faced with a choice: move on with another or fight for a chance at happiness with the last man she ever thought she could trust with her heart?

Oh how I loved this book! Is it predictable? Sure -- but that is part of its charm. This is a novel that takes all the tropes of a romantic comedy and makes them shine. Mansell had me from the novel's first pages, when we're introduced to Dex and one of his fated-to-fail girlfriends. His transformation from romantic lout to caring brother and uncle just KILLED me -- because I immediately knew he was fated to lose his sister, the only person capable of keeping him honest. And as I'm a complete sucker for a redemption story, I was immediately charmed. I loved how Mansell took the time to develop a true relationship between Dexter and Molly, the seeds of a relationship that blossomed over time. While each party's respective detours on the road to happiness was oft-times maddening, I loved Mansell's honest portrayal of the rewards and frustrations of friendship, and the fear attendant with risking the same on the possibility of something more.

As I've quickly learned is the norm with a Mansell novel, in addition to the core romance she peppers each book's world with a host of fully realized, wonderfully flawed support characters, each as in desperate need of a happy ending as Dex and Molly. I loved the idea that Briarwood once played host to a classic BBC television show -- the fictional Next To You -- and one of that "classic's" stars unexpected chance to rekindle a love once thought lost forever. And then there is Frankie, the proprietress of the local cafe, and the completely INSANE discovery that her husband has -- with the best of intentions (*eyeroll*) been concealing the existence of a SECOND FAMILY for nearly twenty years. People, I KNOW this is the stuff of soap opera INSANITY, but for once I just didn't care. Mansell actually made me care about Frankie and her daughter and the fact that somehow, something of their relationship with her husband might be salvageable in a more or less believable manner.

I've quickly come to love losing myself in one of Mansell's frothy romances. Don't Want to Miss a Thing is replete with Mansell's trademark humor and warmth, from comic misunderstandings that leave you gasping with laughter one moment, to poignant moments of loss and uncertainty. Despite its arguably over-long length, there isn't a chapter or storyline I'd want to see cut. Like the best of romantic comedies, Mansell is a master at hitting all the right notes that hook a reader and tug at the heartstrings. One knows the story beats -- the meet cute, the dark moments, the reconciliation -- and while the conclusion may be foregone, here the joy is in the journey. And this is a ride I for one was more than happy to take. I'm so happy I still have multiple volumes of Mansell's backlist to discover. If you're looking for a frothy confection of a read with which you can while away a few hours, this is just the ticket. Enjoy!

He knows all about women, or so he thought...

Dexter Yates leads a charmed existence in London, with money, looks, and girlfriends galore. Life's fantastic until Dex's sister dies and his world changes overnight. Astonishing everyone, including himself, Dex leaves the city behind, takes charge of his eight-month-old niece Delphi, moves to a beautiful Cotswolds village, and sets about working on his parenting skills. His neighbors, including cartoonist Molly Hayes, seem friendly enough—but Dex can't shake the notion that he's missing something important.
Posted by Unknown at 7:12 PM

Oh Ruth, a million thanks for your wonderful review of my latest book - you have quite made my day! I am so thrilled you enjoyed it...and wrote about it so beautifully!
Thank you again.
Love
Jill Mansell xx