Review: A Walk in the Park by Jill Mansell 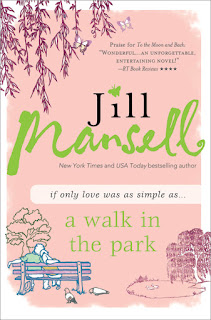 A Walk in the Park
By: Jill Mansell
Publisher: Sourcebooks Landmark
ASIN: B008NCAUKW

When her father kicked her out of the house at the age of sixteen, Lara Carson left her hometown of Bath with nary a word or a look back. Moving in with her late mother's sister, Nettie, Lara moved on with her life, but never quite forgot the one she left behind -- the charming golden boy Flynn. Eighteen years pass, and she hasn't set foot in her hometown until she receives word of her father's death. Returning for the funeral, Lara is shocked to discover that her mother's will provided she be left her childhood home after her father's passing. When she reconnects with her one-time best friend Evie and learns Flynn is back in town, Lara is faced with a choice -- whether or not she can build a future at the site of her most painful memories, and if risking a second chance with Flynn can survive the revelation of a secret she's kept for nearly two decades.

Evie is thrilled when her one-time best friend returns, and just in time for her wedding to the drop-dead gorgeous Joel. But when she discovers on the morning of her wedding day that Joel's been carrying on numerous affairs during their relationship, she leaves him at the altar -- and every insecurity she's ever had about her appearance and judgement return to haunt her. When a new man enters her life, Evie begins to wonder if there could be a man out there who'd find her and her alone to be enough. While Joel refuses to stop his efforts to win her back, Evie must decide if she's strong enough to risk her heart on a future full of uncertainties and unknowns -- is the hope of promise as yet unrealized worth the risk?

After my first successful venture reading a Jill Mansell novel (Millie's Fling), I was left eager to try another -- and this second outing met with mixed results. Similar to Millie's Fling, A Walk in the Park features a large cast of quirky, generally likable characters attempting to navigate the twists and turns of relationships and romance. But where the former is pure, frothy, laugh-out-loud escapism from start to finish, this novel is more serious in tone with humorous moments sprinkled throughout -- and therefore the tone of the novel is decidedly uneven. The premise of the novel works well enough for a chick lit, but the problem in my view lies with making Lara's the main storyline. I get that she had a terrible childhood, one that would -- understandably -- make it difficult for her to trust Flynn. That said, none of her reasons for withholding the existence of their child for EIGHTEEN YEARS hold up -- she never gave Flynn a chance to reject their baby, never gave him a chance to choose -- and while he was certainly immature as a teen, who isn't? While Lara's search for her mother's history provides some welcome suspense, ultimately her unfounded distrust of Flynn and her insistence on keeping him at arm's length until the novel's final pages sour any humorous anecdotes sprinkled throughout their storyline.

On the other hand, Evie's story is thoroughly enjoyable by comparison. A very relatable heroine, Evie's struggles with self-image, her dismay at the discovery of Joel's infidelities, and her struggle over whether or not to move on from that chapter in her life play out with believability, warmth, and humor. I particularly loved the "meet cute" between Evie and Ethan, a local hotel "gardener." The subsequent misunderstandings that strive to keep them apart are the stuff of romantic comedy gold, but serve an important dual purpose in how they force Evie to confront her deepest fears and, for the first time, decide that not only is she worthy of a swoon-worthy love story, but that her self-worth (or lack thereof) needn't determine the course of her future.

While I liked A Walk in the Park, overall it lacked the spark, the life, the humor that I crave when diving into a novel of this ilk. That's not to say there isn't a place in chick lit for touching on more serious personal and/or relational issues (i.e., Orla and Hester's storylines in Millie's Fling, or Amy's character arc in The Runaway Princess by Hester Browne), but when those issues are dealt with in a completely surface, cursory manner, as in Lara's case, it cheapens the character and frustrates the reader. And while I generally like the idea of Mansell penning novels with sprawling casts, hopefully further tangential storylines will not involve almost borderline, offensively stereotyped characters the likes of rapper EnjaySeven -- that didn't work for me at all. That said, Flynn is such a winning hero and Evie's story so enjoyable that I'll definitely be reading more Mansell novels in the future.

No one could have planned for this...

Lara Carson left her family and boyfriend Flynn eighteen years ago without a word to anyone. Why has no one heard from her since? Does it mean anything that she's suddenly reappeared in Bath just in time for her ex–best friend Evie's wedding? And what about Flynn? Even the most eagle–eyed observer can't tell whether he's happy to see her, or just stunned.

While secrets pile up on secrets, and the gossip mill wings into high gear, the brand–new life Lara's searching for becomes ever more elusive. There's a lot of catching up for everyone to do, and Lara's return is going to be anything but a walk in the park.
Posted by Unknown at 7:55 PM

I must read this author! As always, love your reviews. :)

Hi Ruth, and many thanks for your thoughtful review. I do take constructive criticisms on board and do actually agree with you about Lara's selfishness but after writing almost 30 novels, each containing very many characters, I'm finding it harder and harder to come up with good and convincing reasons to keep my heroes and heroines apart! But yes, you are quite right, Lara was selfish.
My characterisation of Enjay was meant to be that he himself is playing up to the stereotype purely in order to conceal his true self. It was an act, necessary in his eyes, to keep the secret he perceived as shameful.
Thank you for your nice comments too!
Best
Jill Mansell

Hi Ruth, and many thanks for your thoughtful review. I do take constructive criticisms on board and do actually agree with you about Lara's selfishness but after writing almost 30 novels, each containing very many characters, I'm finding it harder and harder to come up with good and convincing reasons to keep my heroes and heroines apart! But yes, you are quite right, Lara was selfish.
My characterisation of Enjay was meant to be that he himself is playing up to the stereotype purely in order to conceal his true self. It was an act, necessary in his eyes, to keep the secret he perceived as shameful.
Thank you for your nice comments too!
Best
Jill Mansell