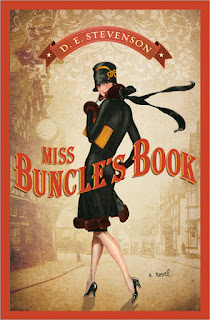 Thanks to the Depression, Miss Barbara Buncle's finances have never been in such dire straits. As the dividends she's relied upon for her living dwindle, delivering ever-smaller returns, she hatches a desperate plot -- surely she'll make money if she sells a novel. But first, she'll have to write it -- and as Barbara is quick to admit, she has little imagination. But desperate times call for desperate measures, and what Miss Buncle lacks in imagination she more than makes up for in determination and observational skill. And so Miss Buncle writes what she knows, and when to her shock and delight her novel, Disturber of the Peace, is published (under the pseudonym John Smith), it becomes abundantly clear that what the unassuming spinster knows best is her town of Silverstream and its varied and colorful inhabitants.

To Miss Buncle's shock, Disturber of the Peace becomes a runaway bestseller, alternately lauded for its simple, refreshing realism or reviled for its gossipy tone and passionate scenes, with the controversy reaching a fevered pitch when Barbara's friends and neighbors recognize themselves within its pages. She never expected those painted in a less-than-favorable light in her book to become obsessed with unmasking John Smith's true identity -- or for others to take their fictional doppelgangers' actions to heart, translating her script for their lives from the page to reality. As the lines between fiction and reality become increasingly blurred, Miss Buncle -- she of little imagination -- finds herself facing the greatest challenge of all: penning her own happy ending and finding the courage to live it out.

People, you know the saying you can't judge a book by its cover? Well I'm happy to say in this case you totally can, as the gorgeous, charming, red-accented cover Sourcebooks created for this reissue is the entire reason I picked up this novel in the first place. First published in 1934, Miss Buncle's Book is quirky, engaging, utterly charming, and very much a product of its time, as the best way I can think of to describe this story is a screwball comedy in novel form. Screwball comedies reached their creative zenith during the Great Depression, tapping into the public's desire for escapist fare, oft-times wrapped in biting -- and hilarious -- social satire (i.e., My Man Godfrey, You Can't Take It With You, etc.). Miss Buncle's Book is startlingly reminiscent of the later 1936 gem Theodora Goes Wild, starring the inimitable Irene Dunne and Melvyn Douglas. In that film, Theodora pens a racy bestseller under a pseudonym and she's desperate to maintain her reputation while evading the ardent pursuit of the man responsible for illustrating her book cover -- the latter sure she needs rescuing from her strait-laced hometown. In contrast to the later film, Stevenson's novel is the bitingly funny portrait of a town in flux, completely at the mercy of a disingenuous authoress who had the temerity to write what she knows with brutal honesty. *wink*

While Barbara Buncle is linchpin around which events revolve, the novel is rather episodic in nature, traveling house to house, examining the impact of Disturber of the Peace vis-a-vis each Silverstream resident's sense of humor (or lack thereof), contrasted with the plot trajectory their literary counterpart is set upon within the novel. Stevenson throws so many characters into the mix that between there actual identities and their fictional counterparts, keeping everyone straight is a bit confusing at first. But once the story finds its rhythm, following Barbara's attempts to deal with the fallout from her debut while trying to pen a sequel, and the impact of her startlingly sharp observations playing out in the lives of her unwitting subjects, the resultant novel is an utter charmer. While I loved watching Barbara blossom, exceeding the expectations of everyone who thought they knew her, I particularly loved the story of the Vicar, the gold-digger, and the student -- a love triangle for the ages!

Miss Buncle's Book sparkles with humor and period detail, a timeless and hilarious examination of the pitfalls of pride and the foibles of human nature. Sure to appeal to fans of P.G. Wodehouse and the like, Stevenson's wit and charm shines. I'm thrilled to have at long last discovered a new favorite "classic" author, and cannot wait to explore her backlist further!

Who knew one book could cause so much chaos?

Barbara Buncle is in a bind. Times are harsh, and Barbara's bank account has seen better days. Maybe she could sell a novel...if she knew any stories. Stumped for ideas, Barbara draws inspiration  from her fellow residents of Silverstream, the little English village she knows inside and out.

To her surprise, the novel is a smash. It's a good thing she wrote under a pseudonym, because the folks of Silverstream are in an uproar. But what really turns Miss Buncle's world around is this: what happens to the characters in her book starts happening to their real-life counterparts. Does life really imitate art?

A beloved author who has sold more than seven million books, D.E. Stevenson is at her best with Miss Buncle's Book, crafting a highly original and charming tale about what happens when people see themselves through someone else's eyes.
Posted by Unknown at 12:52 PM

That cover is so gorgeous! It's exactly the kind of cover I'm drawn to pick up in bookstores. :) The story sounds interesting, too (it does sound like a screwball comedy), and I'll have to try to check it out!

I really want to read this book. I should get on that.

@Kristin - I hope you get the chance to try this one, I think you'd really enjoy it!

@Tasha - You too - I thought it was super cute!