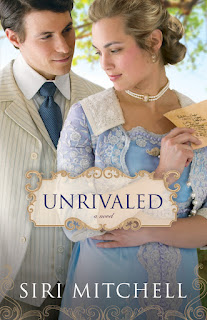 When Lucy Kendall returns from touring Europe with her aunt and uncle, she brings back not only trunks full of the latest fashions but samples of gloriously decadent, inventive candies that she hopes will serve as the inspiration for a new creation that could save her family's company -- City Confectionery. But Lucy's dreams of working alongside her father, crafting a new, mouth-watering treat that will capture the tastebuds of customers and surpass the success of Royal Taffy, the runaway bestseller stolen by her father's one-time employee, the ruthless businessman Warren Clarke. But upon her return to St. Louis, Lucy's dreams of a candy-coated future are shattered when she discovers her beloved father, bedridden following a heart attack and the family's financial fortunes on the verge of ruin. Her mother, determined to sell the company, pushes Lucy to make a good marriage before the family's fortune -- and reputation -- is irretrievably tarnished by the confectionery's decline. But Lucy wants more than a marriage -- she wants to be the girl who saves her family with an irresistible candy crafted from the heart and soul of her imagination.

St. Louis is Charlie Clarke's chance to leave the shame of Chicago behind him and reconnect with the father who abandoned his family years before. But his father's position in society as the owner of Standard Manufacturing is wholly outside the realm of Charlie's hardscrabble South Side upbringing, and he struggles to adapt, both resenting and craving his father's sudden interest in his life. When he meets Lucy, the "Queen of Love and Beauty," he's captivated by the girl who for one brief moment made him believe he could be a better man, one worthy of her affections. But Lucy is a Kendall, and when she learns he's the son of the man attempting to force her father out of business, a war of wills ignites between the two that threatens to fragment the tenuous connection between them beyond repair. As the competition between Standard and City grows increasingly heated, can Charlie and Lucy find the strength to resist becoming pawns in a battle that threatens to destroy every sweet thing they hold dear?

I've said it before but it bears repeating -- I adore Siri Mitchell's writing, and though it's taken me a while to finish her latest it was worth the wait as each page was worth savoring (no pun intended given the novel's subject matter!). For her latest tale of a woman struggling for self-actualization, Mitchell turns to 1910 St. Louis and the early days of branding and competition within the sweetest of industries -- candy-making. For an industry whose basis is quite literally in sugar, spice, and everything nice, the actual business side of candy-making proves to be a surprisingly ruthless foil for its output -- one rife with dramatic possibilities and spiritual truths.

Of Mitchell's novels that I've read thus far, Lucy is perhaps the most potentially problematic heroine -- she's incredibly single-minded in her drive to save City Confectionery, and that overwhelming desire coupled with a measure of immaturity and selfishness leads her to commit some rather unsavory actions in the name of family pride. That said, as such Lucy is perhaps one of the most refreshingly honest leads I've encountered yet in inspirational fiction. Raised in church, she is no stranger to the concept of faith, but rather than allowing a relational faith to transform her, she relies on being "essentially" good. Only when she can no longer justify her actions in the name of fairness, when she realizes how she's hurt others in her single-minded pursuit of her goal is she able to realize the need for a vibrant, relational faith in her life. Much like her universally reviled hazelnut chews, the veneer of propriety cannot mask the bitter aftertaste of a personality with whom no one wants to associate themselves -- a crushing realization that forces Lucy to re-examine everything about herself and what she holds true.

Charlie Clark receives equal point-of-view page time to Lucy, at a ratio that surpasses my memory of Mitchell's previous heroes. As a result he is one of Mitchell's most fully realized, appealing, and sympathetic characters. That said he is far from perfect, and like Lucy as in his own way used circumstances beyond his control to dictate his actions, oft-times to the detriment of others. I loved seeing St. Louis society through his eyes, and the unabashed ardor with which he responds to Lucy following their initial meeting was positively swoon-worthy.

The time period and exploration of class differences mark Unrivaled as sure to appeal to fans of Downton Abbey, with a distinctive American twist. :) Mitchell continues to possess an unparalleled ability to evoke history as evidenced here through her carefully-meted use of fact, ephemera, and language to evoke the time in which Lucy and Charlie would have lived. This is a novel rich in historical detail, and thanks to Mitchell's excellent plotting and well-drawn characters, imbued with extraordinary warmth, humor, and unvarnished honesty, results in a positively decadent reading experience. Like the candy at the heart of the Kendall-Clarke feud, Unrivaled is a rich, multi-layered exploration of the cost of pride, the power of forgiveness, and the transformative power of faith, and of a belief that asks only that we come as we are -- not as we think we should be. A deceptively straight-forward romance, like the finest of candies Unrivaled is a gorgeously realized examination of character, honor, and family, beautifully told.

Falling in love could be a recipe for disaster...

Lucy Kendall returns from a tour of the Continent, her luggage filled with the latest fashions and a mind fired by inspiration. After tasting Europe's best confections, she's sure she'll come up with a recipe that wills ave her father's struggling candy business and reverse their fortunes. But she soon discovers that their biggest competitor, the cheat who swindled her father out of his prize recipe, has now hired a promotions manager -- a cocky, handsome out-of-towner who gets under Lucy's skin.

Charlie Clarke's new role at Standard Manufacturing is the chance of a lifetime. He can put some rough times behind him and reconnect with the father he's never known. The one thing he never counted on, however, was tenacious Lucy Kendall. She's making his work life miserable...and making herself impossible for him to forget.

As a special bonus, here is my vision of Charlie Clarke (only in a turn of the century suit!) -- he's very much cut from the Neal Caffrey/Matt Bomer mold: 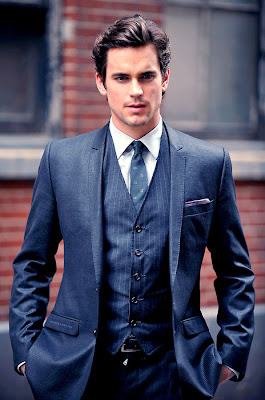 Am I the only one who sees an incredibly strong resemblance to Branson and Lady Cybil in the cover photo? Uncanny!!

^ The first thing I thought when I saw the cover was: Lady Sybil! :)

I'm glad you enjoyed it, Ruth. To be honest, I was a bit disappointed. I usually love Siri Mitchell's books, but this one wasn't as lovely as I expected.

@Kate - I definitely see the Lady Sybil resemblance -- didn't really see Branson there until you mentioned it, though (I was too distracted by visions of Matt Bomer in my head, lol!). ;)

@Kristin - This model really does resemble Sybil! I'm sorry this book didn't work for you as you'd hoped...there's always the next release! :)

Glad you enjoyed this one, Ruth! Since it was my first book by Siri, I liked it much better than I gave credit to it given my perusal of the synopsis and flipping through the book but... didn't love it. I've been encouraged to try one of her contemporaries and think I just may be persuaded to try again! ;)

@Rissi - Did you read Unrivaled or just flip through it? Anyways...hope you continue to check out her work, as I think she is a fantastic author! :)

I did read it, Ruth - flipped through it prior to reading the whole thing and my impression from that was I wouldn't care for it. Glad to have liked it better while actually reading it. I am thinking about reading her new book next year - maybe it'd stay with me longer! :)

I immediately like Charlie more now that you have shared that picture of Matt Bomer. Admittedly I pictured him blonder I think but Bomer is a much more satisfying way to go.