Review: Tempest in the White City by Deeanne Gist 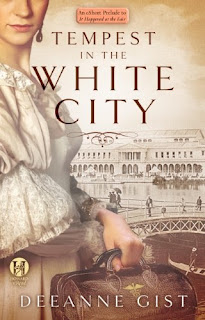 Tempest in the White City (Prequel to It Happened at the Fair)
By: Deeanne Gist
Publisher: Howard Books
ASIN: B00B0XIC74

When Texas Ranger Hunter Scott was assigned to work the Chicago World's Fair, he anticipated working an exhibit that was suited to his rough-and-tumble tastes. Instead he's assigned to the Women's Building, where every corner was created, designed, filled, and run by women. When his nagging stomach pains blossom into an ailment that leaves him as helpless as a babe, he finds his welfare dependent on the one thing he fears most -- a doctor, and a female one to boot. Dr. Billy Jack Tate thought her greatest challenge was being one of the first female doctors in a male-dominated field -- until a handsome, stubborn Texas Ranger stumbles into her clinic and sparks fly.

Tempest in the White City could perhaps be more accurately titled Tempest in a Teacup, as I remain unsure of the point of its release. Ostensibly a prelude to Gist's latest full-length novel, It Happened at the Fair, Tempest is a slim story featuring characters that don't even feature in the later book (if the search inside feature is to be believed). While this story hints at Gist's ability to bring the 1893 World's Fair to life, replete with historical detail and ephemera, this vibrant backdrop is overshadowed by a meet-cute that consists of, I kid you not, a man in desperate need of an enema. It's an interesting twist on the always-popular battle of the sexes storyline in historical fiction, but with so little time in which to develop decent characterizations, as a reader all I was left with was a story about a man so neurotic about his own body processes that he makes himself seriously ill. I mean, really? Perhaps in a full-length novel you could get some plot mileage from a relationship that builds around late nineteenth-century constipation treatments, but in this format it's just...awkward. Here's hoping Gist's full length follow-up takes full advantage of its setting to craft a more...palatable romance.

When a World’s Fair Guard and the woman doctor assigned to treat him square off in the White City, a storm is brewing…

Hunter Scott is one of the elite. An 1893 Chicago World’s Fair guard specifically chosen for his height, physique, character, and ability to serve and protect. When he is overcome with debilitating abdominal pain, Hunter stumbles to the Fair’s infirmary only to discover the doctor is female—who ever heard of a female doctor? But even worse, she has the nerve to diagnose him, the toughest man west of any place east, with constipation—an unspeakable ailment in mixed company. What will happen when this tough Texan and attractive doctor face off? Either way, a tempest is brewing...
Posted by Unknown at 7:17 PM

Thanks for the review, Ruth. Enjoyed Deeanne's latest book but wasn't too "concerned" about reading this. Interested in her next one though - about the female doctor in 'Fair.' I believe. :)

@Rissi - Probably the doctor featured here...interesting that they chose to release a teaser for her 2nd fair book before the 1st one released.