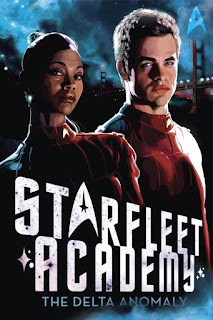 As I've become increasingly obsessed with all things Star Trek-related (thanks to the J.J. Abrams' films), it was only a matter of time before I explored some of the Trek fiction that's available. While I've become increasingly fond of the original series character incarnations, I couldn't resist a novel that utilized the re-boot characters that I love so well. The Delta Anomaly is the first entry in the Starfleet Academy series, which explores the lives of Kirk, McCoy, Spock, and Uhura before the events of the 2009 film that brought them together aboard the Enterprise. Before Spock and Uhura were a couple, before Kirk and Spock were on speaking terms, The Delta Anomaly explores the lives of these four key Trek players and their lives as cadets at the Academy that would make them the officers countless fans have known and loved for decades (in one incarnation or the other *wink*).

The novel opens with a murder high atop San Francisco's Transamerica Pyramid, shortly followed by an attack on Gaila, the green-skinned Orion cadet with whom Kirk has a brief fling in the 2009 film. Gaila is rescued by Kirk, but disturbing evidence discovered in subsequent medical examinations raises fears that the infamous "Doctor" has returned to prowl the streets of San Francisco once more. The Doctor is known for striking on fog-shrouded nights, and leaving no visible marks of violence on his victims -- but nonetheless stripping them of select internal organs. Tasked with stopping a killer as elusive as the vapor cloaking San Francisco's mist-shrouded streets, Kirk, McCoy, and Uhura -- with a little assistance from a newly-minted instructor called Spock -- must put aside their differences in order to take on a killer threatening Starfleet's finest, a mission that threatens to cost them one of their own.

It's been several years since I've read a category science fiction novel (I cut my teeth on the Star Wars Extended Universe series), and while The Delta Anomaly doesn't have the depth of my favorites from that fandom -- mostly due to the abbreviated YA-length -- it is a fast-paced, enjoyable glimpse into Kirk & company's early years. I really liked the conceit of transplanting a Jack the Ripper-esque killer into the world of Star Trek, and the subsequent investigation and revelation concerning the Doctor's origins and purpose are nicely suggestive of a episode in its tone and subject matter. Having the Doctor serve as a lethal, alien mirror of Starfleet's exploration mandate works well in forcing Kirk, McCoy, and Uhura to view that said mandate from their would-be subject's perspective.

This novel doesn't simply focus on the mystery of the Doctor -- it also provides some insight into the academic experience of Starfleet cadets. I loved the chance to see Kirk as someone other than a playboy, a hotshot braggart -- but he also manages to channel some of his soon-to-be legendary bravado into his studies. It's refreshing to see this newer incarnation of Kirk so driven to succeed at the Academy -- particularly in the test scenarios designed to measure his potential leadership ability (a dry run for the Kobayashi Maru test he faces in the 2009 film).

The Delta Anomaly is a fast-paced, enjoyable little slice of Star Trek-colored escapism sure to satisfy fans looking to spend an hour or two with the characters we've grown to love outside of the two Abrams films. The principle players are sketched in a manner reasonably faithful to their on-screen counterparts, and the balance of academia, mystery, and yes -- even a dash of romance (I LOVED seeing Kirk go all doe-eyed over Hannah the barista!) makes one wish that somehow we could get a television series (as well as more films) featuring these new Trek characters. I'll definitely be reading more in the series.

A new Starfleet Academy series for teens--filled with romance and adventure!