Review: Beauty and the Beast by Jenni James 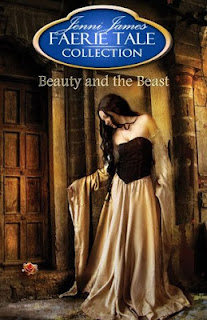 When Prince Alexander, the spoiled, handsome ruler of the land directs one of his famous insults at an ugly old woman, the last thing he expects is retaliation. But retaliate she does, cursing him to live each night in the form of a beast unless he can find a woman to love him in his beastly form within a year, thereby breaking the spell. Losing hope that anyone could look beyond his beastly form, Alexander concentrates his efforts on a succession plan, determined to leave his kingdom in better hands than his own. But when he crosses paths with the brokenhearted Miss Cecelia Hammerstein-Smythe, he begins to hope for a future free of his cursed form. For Cecelia, once mocked by Alexander for her kind heart and rejected by another suitor, sees a goodness in Alexander the beast that he never knew existed, making him long to be a man and ruler worthy of her regard. But just as Alexander begins to hope that Cecelia's love might break the spell, another force rises to threaten his hopes -- one determined so determined to steal Alexander's throne he'd do anything to ensure the prince remains a beast forever.

Being an absolute SUCKER for all things fairy tale related, when I stumbled upon Jenni James' series of fairy tale retellings I knew I had to give them a try. James clearly has a passion for fairy tales and her spin on the tropes of the Beauty and the Beast tale possesses some interesting twists. But any charm these sparks of creativity lend the story is overwhelmed by plodding prose, clunky dialogue, and uneven pacing.

James sets her tale in what I can only assume is the Regency time period due to repeated references to cravats and over-use of "gel" for "girl." It's an interesting concept, setting what is essentially a werewolf story in this time frame. While I liked the idea of the prince as a beast only half the time, allowing readers to see Cecelia interact with his human and beastly selves, the conceit falters due to a lack of context. With no set ground rules for the time period or the use of magic within this world, the novelty of this twist quickly fades due to the lack of world-building. And while the basic idea of the "Beauty" character as a somewhat shy, socially awkward society miss is novel, there is never the sense of true peril or sacrifice on Cecelia's part that makes the traditional story -- and more polished retellings -- so timeless.

I have to give the author credit for her passion for these timeless stories, and there are indeed the seeds of unique ideas within this novella that only faltered for a lack of development and polish. That said, the book kept me sufficiently interested to read in one afternoon, if for no other reason than a sense of nostalgia that my childhood self would've appreciated James' romantic bent. Those seeking more substantive, powerful retellings of the Beauty and the Beast story should check out Robin McKinley's classics -- for here is a featherweight, fluffy effort that will leave you craving the transformative power of the source material.

A prince by day and a wolf by night—

Prince Alexander has been turned into a werewolf and has one year to find someone to love the beast and break the spell, or he will be a wolf forever. He has nearly given up achieving the impossible, knowing no girl would ever fall in love with such a monster.

Just when he is about to abdicate the throne to his cousin, he meets Cecelia Hammerstein-Smythe, while a wolf, and begins to hope for the first time in months. Can he balance both worlds as a human and beast, gaining the love and trust of a girl who has every reason to despise him?

Cecelia detests the prince. She only knows Alexander as the arrogant monarch—the tyrant who has made her life miserable—though perhaps he's changed right before her eyes. He's not as full of himself as he once was. The prince is gentle now... but then again, so is the beast.
Posted by Unknown at 12:45 PM

Have this series stack with a pile of books to read as I love all things fairy-tale. Just from reading another of Jenni's books and looking into them, I figured they wouldn't be "perfect" but like you, I am not a girl who can resist a fairytale!? ;)

Thanks for spotlighting this one, Ruth.