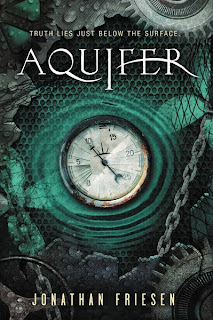 The Earth of the future is a wasteland. The once precious liquid that sustained life -- fresh water -- has vanished, leaving only its salty counterpart in its stead and a people struggling to eke out a meager existence on the dusty wastelands that once teemed with life. Fresh water is only available from one source, the Aquifer, and once a year the Toppers send their Deliverer into the bowels of the Earth to broker a deal with the fearsome Water Rats who control the Aquifer for a year's supply. Luca is the son of Father Massa, the current Deliverer, the path to salvation stamped indelibly on his psyche since childhood. In a world that demands conformity and employs fearsome Amongus, watchmen tasked with stamping out any hint of individuality or emotion. At sixteen and on the cusp of adulthood, Luca begins to question everything he's been taught, and finds himself drawn to the forbidden -- bursts of emotion, rumors of scratchings (i.e., books) that once set the world on fire. When his father disappears on his yearly water pilgrimage, the responsibilities of Deliverer fall to Luca -- a weight he's unsure whether or not he's capable of carrying thanks to the newly-formed questions and doubts filling his once-ordered life with tumult. With the help of Seward, a wily pirate, Luca goes rogue in an attempt to discover the truth of the Aquifer and his calling -- a truth with the power to destroy the fabric of Luca's society, or set two worlds free forever.

Aquifer came on my radar when the new Blink imprint from Zondervan was announced earlier this year. With a goal of publishing YA fiction that would appeal to both faith-based and general-market readers (regarding the former, those certainly tap into both markets in my experience), I was eager to explore the types of titles this imprint brings to the market. Aquifer promises a dystopian adventure in the vein of The Hunger Games and other novels of that ilk -- a world at once both familiar and strange, where an item that supports the very fabric of life, so often taken for granted, becomes scarce, the pivot on which the very future of society depends.

Friesen's New Pert, Austrayla, is the epicenter of activity, the social hub whose survival depends on a steady supply of water from the Aquifer. I loved the dystopian Australian setting, as it frankly isn't one often seen in fiction in my experience -- and as it is surrounded by salt water, its very setting adds to the sense of isolation and imminent peril facing Luca and his people. Of the characters, Luca is the most well-drawn, but while that is to be expected given his status as the novel's hero-in-training, it's frustrating when to the relatively colorless by comparison supporting players -- those for whom Luca has been trained from birth with the understanding that he is in many respects as their "savior" and defacto leader (albeit a relatively powerless one thanks to the Amongus).

While Aquifer isn't a Christian novel per se, it definitely seems informed by a biblical worldview, and that aspect of the storyline is both its greatest strength and its most maddening quality. Luca first encounters faith when he meets the Wishers, whose faith in an unseen power and ability to avoid the Amongus' power to detect unsettling, emotional "wrinkles" intrigues him, thus priming him for the realization that there is more to living than the strictly proscribed boundaries in which he exists. However, the novel sets Luca up as a Christ-figure (the historical implications of naming his father "Massa" are also somewhat troubling, as if Luca is the savior then his father is a god to the people, though powerless), without an alternative, without fully exploring what or who it is calling on Luca to live a radical life, to embrace truths so wild they are capable of sparking revolution.

Although hampered by a sluggish start, Aquifer contains a refreshing (no water-related pun intended) premise whose biggest drawback is, perhaps, a lack of depth. While Luca is a competently-realized hero, he is surrounded on the whole by frustratingly one-dimensional characters (particularly Luca's "love" interest), very literally sheep without a shepherd -- and if that was the intent, the allegorical content of the storyline veers into extraordinarily heavy-handed territory, which does a disservice to an otherwise potentially interesting premise. With a greater focus on world-building and supporting character development, subsequent installments exploring Luca's heroic journey and attempts to revitalize a faith-starved world hold promise. Aquifer is in many respects an uneven effort, but it is ultimately a thought-provoking read that's left me curious for Friesen's (and this new imprint's) future work.

Only He Can Bring What They Needed to Survive.

In 2250, water is scarce, and those who control it control everything. And they'll do anything to maintain their power---deceiving, dividing families, banning love ... even killing those who oppose them. But above all, they seek to control knowledge and communication---ensuring the truth that will bring their downfall will never be known.

But one person verges on discovering it all. Sixteen-year-old Luca becomes the Deliverer, the only one allowed to contact the people called 'Water Rats,' who mine the essential water deep underground and bring it to the 'Toppers' who desperately need it above. But when he meets a Water Rat who captures his heart and leads him to secrets---secrets about a vast conspiracy, and about himself---the net around him tightens. Luca and those around him must uncover and share the truth needed to overthrow tyranny---even as they fight for their lives.
Posted by Unknown at 4:15 PM

Dropping by to wish you a HAPPY BIRTHDAY, Ruth! Hope your day is awesome and you spend part of it doing something you love - many happy wishes.

Been thinking about you and your family - hope things are going well and your dad is getting better.

@Rissi - Thank you friend, I appreciate that -- and sorry about the belated reply. Dad is doing better -- it has been a slow process -- but happy to see improvements! I am slowly but surely trying to get back into blogging. :)