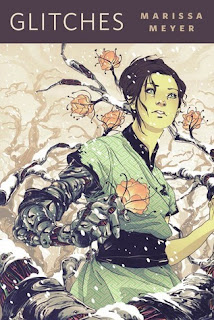 Glitches is a short prequel to Marissa Meyer's debut, Cinder -- a futuristic, science-fiction colored retelling of the Cinderella story. Since I adore fairy tale retellings, Cinder has been (languishing) on my to-be-read stack since its debut -- but as I am determined to finally dive into Meyer's world, I thought it only appropriate to first read this short story that introduces Cinder and her world (though it should be noted that it was released after Meyer's debut - but since I generally try to read series fiction chronologically, I opted to read this story first).

Released as part of TOR's 2012 Fierce Reads anthology, Glitches introduces a pre-teen Cinder, half-human, half-cyborg, en route to her new home in New Beijing. "Enhanced" with a robotic arm and leg following the accident that killed her parents, she's left without memory of her previous life in New Europe and only the hope that she can find a home with Garan, the man who oversaw her "rebuild" and his wife and daughters. I LOVED this set-up -- in a world at once both familiar and alien, Cinder finds herself acclimating to a life without context, where she is not only feared by many for her mechanical aspects but possesses abilities and talents she's received no training in (like instant data look-up, and an affinity for robotic tinkering).

Though just a few pages long, this short story packs quite a punch, establishing Cinder's relationships with her stepsisters -- the sympathetic Peony, the more snobbish Pearl, the reconstructed robot Iko, and the harsh -- and presumably soon-to-be-villainous stepmother Adri. The events leading to Garan's presumed death and Cinder's subsequent fall from grace in Adri's eyes are pitch-perfect and heartbreaking, especially given Cinder's disconnect with human emotion thanks to her amnesia and newly-enhanced form. This is a fantastic introduction to Meyer's imaginative world-building, and I cannot wait to dive into her full-length fiction now!

Cinder, a gifted mechanic, is a cyborg. She’s a second-class citizen with a mysterious past, reviled by her stepmother and blamed for her stepsister’s illness. In Glitches, a short prequel story to Cinder, we see the results of that illness play out, and the emotional toll that takes on Cinder. Something that may, or may not, be a glitch...
Posted by Unknown at 6:02 PM