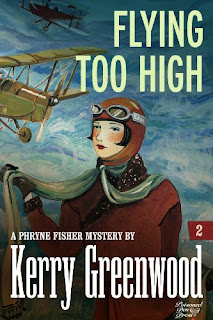 Earlier this year, when news that the Australian period drama Miss Fisher's Murder Mysteries was being released in the US, I took the opportunity to check out the first volume in the long-running series by Kerry Greenwood -- Cocaine Blues. While I enjoyed the fast-paced storyline, colorful cast of supporting players, and Greenwood's flair for the time period, I found the titular character's penchant for crass hook-ups and complete lack of a moral center when it comes to her "romantic" relationships distracting and off-putting. Since then, I've watched the entire first season of Miss Fisher's Murder Mysteries and fallen hook, line, and sinker for the gloriously realized television incarnation of Greenwood's beloved characters, and decided it was long past time for me to give the show's source material another try.

Following the success of her first venture as a private investigator, chronicled in Cocaine Blues, Phyrne Fisher has continued to re-acclimate to life in Australia, determined to use the fame and notoriety that came with her first brush with Australia's criminal element as the launching point of a new and exciting career. Her first new case arrives in the form of one very distraught society wife, Mrs. McNaughton, afraid that her airplane-loving son Bill -- well-known for his temper and his money troubles -- is plotting to kill his louse of a father over a disputed loan. Phyrne is thrilled -- not only with the case, but with the opportunity it affords for her to practice her skills as an amateur aviatrix and connect with the local flying community. Meanwhile, the precocious daughter of a local lottery winner (and an associate of Bill's) is kidnapped and held for ransom. When the McNaughton family patriarch is found dead, Phyrne determine's to clear the son's name -- and in the process is drawn into the kidnapping case, quickly discovering that nothing is as it seems in either crime, and with a child's life at stake, time has never been more precious.

Flying Too High contains all of the elements that worked in its predecessor -- the well-drawn supporting players, the fast-pace and energy -- and fewer of its pitfalls -- Phyrne still unfortunately seeks out random hook-ups, but they are less prevalent to the storyline here. I loved maid Dot's growing loyalty to her new mistress and the introduction of the unflappable (and aptly-named) Mr. Butler and his wife. The two separate mysteries were serviceable in and of themselves, but awkwardly resolved as the threads of each disparate case don't join until over halfway through this slim novel.

While I love Phryne's boundless energy and heart for those who are wounded or in trouble, the manner in which some of her other-wise better impulses play out is troubling. When she meets the daughter of the deceased Mr. McNaughton, and learns the woman was abused by her father, Phryne then proceeds to SLEEP WITH the woman's fiance JUST BECAUSE SHE CAN, apparently. *rollseyes* And while I appreciate her drive to see the kidnapped girl returned unharmed -- particularly when it's discovered that one of the perpetrators is a notorious child predator -- her willingness to "procure" a prostitute for the CRIMINAL once he's on death row in order to buy his silence for another is nauseating to say the least. Greenwood is not adverse to tackling darker subject matter in her stories, but the imbalance between Phyrne's humor, warmth, and devil-may-care attitude and her thoughtless or outright troubling "indulgences" leave me finding her stories wanting in the extreme. While the seeds of everything I love about the television show are present in the first two installments of this series, as yet the show wins for transforming weak characterizations and choppy plots into engaging, addictive television.

Walking the wings of a Tiger Moth biplane in flight is excitement-enough for most people, but not Phryne Fisher, aviatrix, socialite, and private investigator. Whether she's seducing beautiful young men, foiling nefarious kidnappers, or simply deciding what to wear to dinner, Phryne handles everything with inimitable panache and flair. In this, the second Phryne Fisher mystery, Australia's most glamorous detective flies even higher, handling murder, a kidnapping and the usual array of beaus—all before adjourning to the Queenscliff Hotel for breakfast.
Posted by Unknown at 3:36 PM

Hmm Idk about the hookup thing. I do enjoy the TV series a lot!

Oh dear, I was really interested in reading the books (I love the TV series SO MUCH!), but now I'm not so sure. I don't require my heroines to be perfect, but causally hooking up with someone else's fiance is pushing it.