People, I am absolutely thrilled to welcome my friend Traxy, from The Squeee (see, now that is just fun to type), to the blog today with a guest post for the All Things Jane series. The tagline for Traxy's blog is "May contain ramblings of an easily overexcited fangirl. And cravats." - so, I think you can see why I consider her a friend. :) I consider Traxy something of a Jane Eyre expert - back in November 2010, she set herself the task of seeing how many versions of Jane Eyre she could read, which has spawned reviews of prequels, sequels, and reimaginings. I've also loved reading her reviews of Jane Eyre radio adaptations, since I'm a huge fan of old time radio shows (you can find links to the radio reviews here). She's also a huge fan of Richard Armitage (clearly the woman has excellent taste). Need I say more? :) 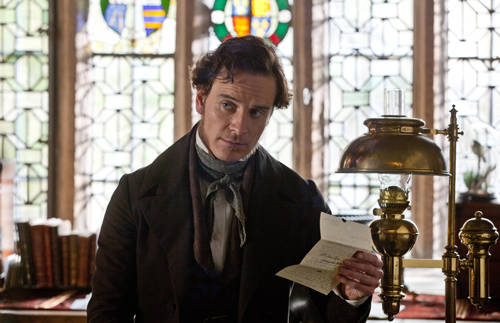 A while back, I got the following question:


I feel like looking up some adaptation of Jane Eyre, because I’m starting to become quite curious, but which one would you recommend? :)

An offer I couldn’t refuse! Here is a collection of the Jane Eyre adaptations that have been made so far (okay, technically, there are a few more, but they’re either in foreign and/or really difficult to get a hold of), and that I have ogled with badly hidden enthusiasm:

So bad and so far from the movie that it’s funny. Fortunately, it’s only an hour long, so the suffering’s cut short.

Very gothic and surprisingly good, even if it’s a bit too short and changes things around in very strange ways. Orson Welles, yay.

No. Scrooge as Rochester is just plain wrong. As are the clothes and the setting.

Has strange voiceovers to distract (and Jane looks constantly surprised), but is very close to the book in a lot of ways – including the way characters make gestures!

Also very close to the book and has possibly slightly higher production value than ’73. Dalton actually looks a lot like the Rochester of the book as well. One of the adaptations favoured by book enthusiasts.

Dwells on Jane’s time at Lowood more than other adaptations do, and does it well. It’s the only adaptation that’s actually brought tears to my eyes! It’s actually a really good film, but it’s very emotionally restrained, which can be really frustrating to watch. Hurt doesn’t fit Rochester by any stretch of the imagination, and Elle MacPherson as Blanche is so wooden that you could use her for firewood.

If you overlook the moustache and the bulky trousers and that Rochester is way too angry/shouty, it’s good and has some funny lines. You never quite forget that you’re watching actors at work, though, but it does contain a scene which had me properly squeeing.

Follows the book in a good way, even if it’s perhaps more true to the spirit of it rather than the actual details. The stars understand the characters and it doesn’t feel as if they’re acting them as much as they ARE the characters - especially Rochester. It might be adapted for a modern audience, but not in a bad way (aside from a few scenes that just feel wrong), and it’s a clear favourite with many fans - myself included.

We’ll have to wait and see! Depending on where you are in the world, you might have seen it already. Us Europeans have to wait until September (or even later) before it comes out here. Boo! Meanwhile, I think you should read Ruth’s review. (Ruth here: Thanks for the shout-out!)

As a good first introduction to Jane Eyre, I would probably recommend the miniseries from 2006, starring Ruth Wilson and Toby Stephens. It has the more important parts without feeling tedious or dull, which at times sadly both ‘73 and ‘83 do.

It has a beautiful soundtrack and feels nicely atmospheric. All in all, it made me feel that wow, this is a book I’d like to read! I had started to read the book before I first saw this adaptation in 2008, but I had put it aside and left Jane at Lowood because I found it a bit dull. Then I saw the ‘06 adaptation and all of a sudden, the book was a lot more interesting! (Dear Charlotte has a few issues getting to the point.)

The filming locations - I’ve been to some of them, squee! - are well chosen, costumes are nice and feel right, and even if Rochester’s hair doesn’t seem to adhere to any laws of gravity familiar the rest of us, you can’t deny the fact that men look great in cravats, coats and tight breeches!

Traxy, thanks again for joining in the All Things Jane celebration! I haven't seen the 1934 film or either of the 1970s versions - I have to confess I'm intrigued! :)

Wow, thanks for all that research! I do love the movie version from the 90s but the newest one has me really excited! I've tried to watch the Orson Wells version, but for some reason haven't been able to get through it. Often times these classic versions are just so...tidy looking, and Orson is caked in make up. However, I think the Olivier "Pride and Prejudice" is much worse ;) (hoop skirts? REALLY? lol)

@Heather - So glad you enjoyed Traxy's post! :) Old movies do sometimes require a different mindset - I have got to stick up for the 1940s Pride & Prejudice though - while the costumes are SERIOUSLY messed up, I do get a kick out of that movie. ;)

You're far too kind, Ruth! *blush*

The thing about old movies is that they rely heavily on DRAMATIC MUSIC. Also, the Welles version is changed around from the novel in some strange ways. They skip Morton entirely and have Jane go back to Gateshead instead! Thornfield looks like a weird, medieval castle as well - stones everywhere. Not at all like a gentleman's country house. And yet, there are loads of people out there who love this version to bits and say it's the best one out there.

As much as I love to watch Orson Welles in his Rochester days, it's still far from the best version out there. All these years, all these versions, and STILL there's no definitive JE adaptation. Such a shame! :(

I haven't seen the new film yet (boo) but I second the miniseries recommendation -- it's perfect, so much so that I cannot imagine another actress depicting Jane so well, with so much humanity and emotion.

Hurt was a HORRIBLE Edward. He was so boring throughout that I couldn't understand what Jane saw in the man.

@Charity - I keep hearing that the new JE will be on DVD by the end of the summer, but so far I can't find an official date announcement. I am anxious to see it again myself! :)

@Traxy - Eeek, almost forgot to respond to your comment! :P Thanks again for being a guest poster, I so appreciate it! :)

I can't wait to read your thoughts on the latest JE...wouldn't say it's definitive, but my oh my does Fassbender's Rochester have his merits. :)

Thanks, Traxy and Ruth! My fave is the 2006 Toby Stephens version. *Sigh.* I am excited to see the new film too since I didn't make it to the theatres. (Cravats and tight breeches? I'm in.)

@Nat - Glad you enjoyed the post, thanks for stopping by! Can't wait to hear what you think of the latest Jane Eyre...Michael Fassbender is such a swoon-worthy Rochester. :)

Oh dear. Count me in. Seriously obsessed. I've seen the new one twice and I could easily drive an hour and see it again but that's so impractical, right?

I did watch the Ciaran Hinds version a few weeks back. It slowly grew on me but it will never be a favorite. (True to the book, he seemed too old and grumpy) I love the interplay between Ruth and Toby in the last version..it's all about their emotional relationship. Well, I did do a movie review myself on the Michael and Mia version, and I couldn't do it without comparison to that favored version.

I recall waiting months to see The Young Victoria while my UK friends chatted about it. Painful!
The new film is just stunning (I bought the soundtrack before I saw the movie) and MF looks better with every viewing. Sigh.

@Debra - If I wasn't so distracted by other new movies coming out, I think I could see the latest JE every week. :)

You did a movie review of the latest? Can you share a link? I'd love to read it!

Right now I'm keeping myself busy enjoying the JE 2011 soundtrack until we hopefully hear news of a summer DVD release. :)

Hey, Ruth...here it is. I can't figure out how to post the link in a nicer way than copying it in.

The soundtrack still takes my breath away.
What movies are you looking forward to for this summer?

@Debra - Thanks for the link!

Movies this summer...happily Thor and Pirates #4 have already delivered for me. :) Off the top of my head I'm really looking forward to X-Men: First Class, Harry Potter, Captain America, Cowboys & Aliens...I know there are a few more but those are some of the biggies on the horizon that I'm really excited about. :) You?