Review: Jane and the Genius of Place by Stephanie Barron 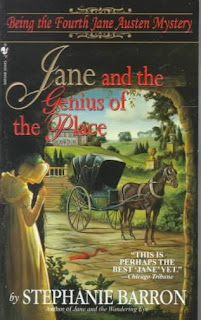 Jane and the Genius of the Place (Jane Austen Mysteries #4)
By: Stephanie Barron
Publisher: Bantam
ISBN: 0-553-57839-1
About the book:
In the waning days of summer, Jane Austen is off to the Canterbury Races, where the rich and fashionable gamble away their fortunes. It is an atmosphere ripe for scandal - but even Jane is unprepared for the shocking drama that unfolds. A flamboyant French beauty, known for her brazen behavior, is found gruesomely strangled in a shabby chaise. While many urge the arrest of a known scoundrel with eyes for the victim, Jane looks further afield and finds a number of acquaintances behaving oddly. As rumors spread like wildfire that Napoleon's fleet is bound for Kent, Jane suspects that the murder was an act of war rather than a crime of passion. Suddenly the peaceful fields of Kent are a very dangerous place...and Jane's thirst for justice may exact the steepest price of all - her life.
Review:
In the summer of 1805, Jane Austen finds herself enjoying the comforts of a visit to Godmersham Park, her wealthy brother Edward's estate in Kent. Following the passing of her beloved father some eight months prior, Jane, along with her mother and sister Cassandra, found themselves set adrift in the world, dependent on the generosity of more well-heeled family members to provide them with shelter and sustenance. Jane determines to enjoy all the benefits that come with her brother's place in society, and is thrilled with a family outing to the Canterbury Races, where her brother Harry hopes to see a horse of his own meet with success. But a thrill of a different kind awaits Jane's keenly observant eye, when the universally disliked Francoise Grey, a flamboyant Frenchwoman, creates a scene and then is later discovered in a shocking state of dishabille, brutally strangled. With Edward serving as the local Justice of the Peace, Jane is privvy to all attempts to bring Mrs. Grey's murderer to justice - but events fail to lend themselves to a straightforward resolution. Was Mrs. Grey the victim of a simple lover's quarrel, or was she playing for deeper stakes - with an eye to Bonaparte invading England's shores? With the nation at stake, Jane's investigations threaten to uncover secrets that the powerful would pay dearly to keep hidden...
For her fourth Jane Austen mystery, Barron continues her tradition of deftly incorporating a clever mystery story into actual known events that occurred in Jane's life. While Jane didn't broach political matters in her writing, it's clear from her letters that she was a well-informed woman, and with two brothers serving in the Navy it is no stretch to imagine that she was highly concerned with the course of England's war with Bonaparte. As Barron states in her Editor's Note introducing Genius of the Place, Kent was "ground zero" for Napoleon's invasion plans - and with the indomitable Jane there in the middle of it all, the possibilities for encountering some good old-fashioned espionage are endless. Barron couples her exploration of the political threat to England at the time with a focus on the pasttimes of a Regency gentleman that would have been of interest to a man occupying Edward's social position. From horse racing to the desire to "improve the landscape" with a re-routed stream or a well-placed ruin, Barron deftly incorporates rich period detail that brings Jane's world to vibrant life.
Along with her brother Edward, we are introduced to a new coterie of Jane's family and acquaintance. While I desperately missed old favorites like the enigmatic Lord Harold Trowbridge and Henry's vivacious wife Eliza, I loved the introduction of Edward's wife Elizabeth - Lizzy - who serves as Jane's primary companion, and I can't imagine a classier, more intelligent foil and sounding board for Jane and her investigations. Barron also introduces us to Anne Sharp, the Austens' governess, with whom Jane would form a life-long friendship and later present her with a presentation copy of her novel Emma. I loved how Barron imagines Anne's storyline to parallel that of Jane Fairfax's relationship with Frank Churchill in Emma. She has a gift for subtly echoing characters or themes found within Jane's published works that make this series an Austen fan's dream come true. The storyline would, I think, benefit from tighter plotting and an earlier, and more in-depth, focus on the espionage element so integral to the storyline. But nevertheless, Genius of the Place is another thoroughly enjoyable entry in the series, replete with Barron's delightful interpretation of Jane's style, wit, and insight.
***
This review marks the second time I've enjoyed Jane's visit to Kent. Read Laurel Ann's review of Genius of the Place at Austenprose, or author Stephanie Barron's post on the research behind the novel.
This marks my fourth entry in the Being a Jane Austen Mystery Challenge.
Posted by Unknown at 4:41 PM

You're making great progress with Barron's books, Ruth! I just posted my review for Jane and the Man of the Cloth (I know, I'm running behind) and I really enjoyed that one. On to the Wandering Eye!

@Joanne - Thanks! You know, if I complete 1 of the many challenges I signed up for this year, I'm hoping it will be this one. At least that's my goal. :) You will enjoy Wandering Eye, it is so much fun!

Looks like an interesting book. Good job on the review!

@Elaine - Thanks! This is a terrific series. :)