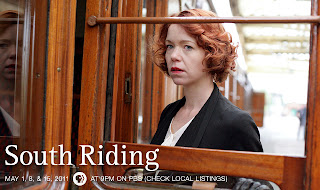 South Riding concluded on Masterpiece Sunday night, and with it the somewhat hit-or-miss Classic portion of PBS's 40th Anniversary season has come to a close. I'm somewhat conflicted about this production - on the one hand, I had some issues with the program trying to cram too much info into too little time, giving character and relationship development the short shrift, while on the other hand, I have to give the program credit for ending on a much better note than I was anticipating after last week's installment. So let's discuss for a bit, shall we? :) Here's the Part Three episode summary from the PBS website:


Sarah returns from Manchester disappointed and anxious, as her efforts to find Robert are dashed, and Lydia greets her with nothing but bitterness. A bottle of Scotch and the companionship of Joe Astell ease her loneliness, but the new year brings her back to business. Sarah firmly pleads with the complacent Mr. Holly to try to find a solution for Lydia, but he continues to think only of himself. Meanwhile, in the face of relentless worries, Robert turns to Mrs. Beddows for reassurance about Midge, who finally begins to show acceptance of her situation. But when Huggins asks Robert to drop his opposition to the land deal, suggesting it could be to his own financial benefit, the enraged Robert loses control and makes an accusation with devastating consequences. What follows are hard choices for the residents of South Riding, who face a future of uncertainty and heartbreak, but also of hope.

After the hookup that wasn't to be, Robert (David Morrissey) leaves Manchester without a word to Sarah (Anna Maxwell Martin), who's disappointed and understandably concerned. Though I have to say, to Martin's and the script's discredit, Sarah comes across as less worried about Robert's panic/stress-induced attack and more concerned with the fact that he wasn't stroking her ego and making a second try at their little would-be affair. Thoughts? While I really like Martin in a general way as an actress, I rather wish this storyline had allowed her to play a more mature "inspirational" teacher figure. For someone so determined to blaze a progressive trail, Sarah can be occassionally quite clueless and immature about the realities of the situations she finds herself faced with. 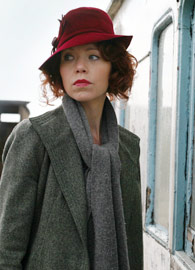 Christmas comes and goes and Sarah's prize pupil, Lydia (Charlie Clark), is still unable to resume her scholarship and return to school following her mother's sudden death. Sarah meets with Lydia's father, Mr. Holly (Shaun Dooley), to pressure him into finding another solution to his childcare problems so Lydia doesn't "waste" her educational potential. That scene annoyed me a bit, primarily because if Sarah is so gung-ho and insistent on getting Lydia back in classes, why isn't she doing something about the Hollys childcare issues herself? I thought Mr. Holly's initial resignation to Lydia's fate, if you will, was interesting and very realistic - he apparently holds the view that since his own opportunities for educational advancement didn't pan out, and since his request for aid was denied there is nothing more to be done. Really rather tragically pragmatic - and one would wish that since Sarah finds this viewpoint so abhorrent she would actually do something to change the situation, instead of gripe about it. All things considered, Lydia's terse response to Sarah's overtures is completely understandable - Sarah should count herself lucky that Lydia didn't bite her head off.

Mr. Holly surprised me in this episode, though upon further reflection I think his way of "fixing" the caretaking issue was really quite moving. I was reminded of pioneer stories, where people married out of necessity, and hoped for love after the vows. I really enjoyed the sparks between Holly and the widowed Mrs. Brimsley (Marie Critchley). Lydia is, of course, understandably reticent about having her mother "replaced" so quickly - and I wish as a viewer I'd been given more time to see a relationship develop between Holly and Mrs. Brimsley beyond their casual, flirtatious banter. Dooley and Critchley had a really lovely screen presence together that I would've liked to see more of - sadly a casual of the enforced three hour run-time. 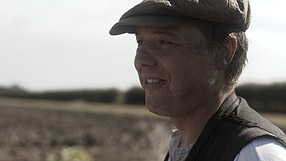 When I heard that Douglas Henshall was appearing in this production, I was really hoping for a major role, i.e. that his character would be a viable love interest for Sarah - but alas that was not to be. Henshall's character, Joe, the politician and activist, was sadly for Sarah consigned to the role of "pal," since she was determined to throw her affections away on a married and unbalanced man. *sigh* I was happy to see Joe's screentime increased in this episode - especially since he finally calls Sarah out, and no longer content to play the best friend role in her life, announces he's leaving South Riding, unless Sarah gives him a reason to remain. And of course, the stupid woman lets him go. However, I have no doubt Joe is better off in the long run. :)

I was thrilled to see Mrs. Beddows (Penelope Wilton) at long last finally come into her own in this final installment, and become the critical, pivotal character I expect an actress of Wilton's caliber to play. Better late than never, I suppose. :) In Part Two it was revealed that Mrs. Beddows was present at the birth of Robert's daughter Midge (Katherine McGolpin), so it makes sense when Robert, facing finanacial ruin, asks his old friend to serve as Midge's guardian should anything happen to him. Robert's request proves eerily prescient when he turns up dead. Gossip immediately starts flying that Robert committed suicide, since he was facing total ruin when the corrupt Snaith (Peter Firth) sues him for slander. 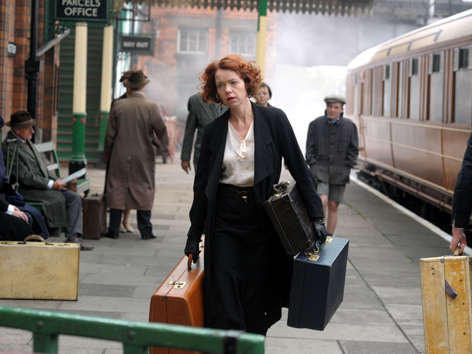 Sarah is, predictably, crushed at the news of Robert's death. Her reaction and vocal insistence on denying Robert's suicide borders on the ridiculous. Their "relationship," such as it was, was based on a single unconsummated hook-up and a handful of friendly encounters liberally interrupted with clashes over South Riding's future. Sarah's reaction to Robert's death and the loss of their "relationship" reminded me a bit of Mary's over-the-top reaction to the death of her diplomat "lover" in Downton Abbey. Both women annoy me by their insistence at becaming so consumed by these dead-end (no pun intended) relationships that never were anything meaningful to begin with, they ignore the positive possibilities staring them in the face. Sarah's reaction is especially disappointing, because she's presented as a character you think should know better. Oh well...c'est la vie...perhaps in the book she does. (Robert's death is revealed to be an accident, and I have to admit the fact that he dies in a freaking landslide - well doesn't it just figure? Oh the dramatics...)

Midge suffers an interesting - and disturbing - fate when her maternal grandfather (Ralph Risch) shows up at Robert's funeral and essentially demands custody from Mrs. Beddows. Midge, who's done another 180 and become unnaturally (for her, anyway) calm since her father's death decides to move in with her grandfather - the man who has basically ignored her for her entire life. The girl appears consigned to a loveless future, and considering her mother's mental problems who knows what secrets her grandfather hides. Vaguely creepy and oh so sad - Midge appears destined to repeat her mother's life. 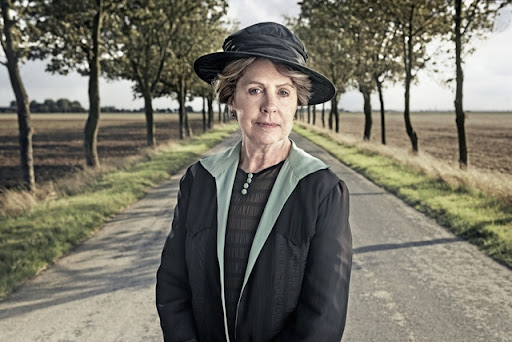 Unsurprisingly, Sarah decides to flee South Riding following Robert's death - and this leads to perhaps my favorite moment in the series, when Mrs. Beddows calls her out for cowardice and shames her for running from her grief. Joe had tried to give Sarah a reality check earlier, which she (stupidly) brushed off, but Mrs. Beddows knows the one way to reach Sarah, to get her to stop thinking about herself, is to appeal to her passion for seeing students like Lydia better themselves. And after delivering a cheer-worthy dressing-down and slap-upside-the-head reality check, Sarah (thankfully) decides not to go to London to wreck Joe's life (pure speculation on my part - HA!), and stays in South Riding - where, hopefully, she grows up.

In spite of my frustrations with some of the storylines (honestly, if you couldn't tell, the whole land-grab deal didn't interest me at all, even though it did have a direct impact on Robert) and some eye-rolling and predictable moments, South Riding ended on a better note than I expected after last week's installment. I've got to give Andrew Davies credit for scripting such a save - there's a reason the man has been one of the "go-to" writers for adapting classics for over a decade. Robert's old home is turned into a mental hospital, and the troubled Muriel (Lydia Wilson) finally gets her dearest wish - she can go "home." Since it was abundantly clear she was never going to get better, I really liked this resolution to her tragic story - and since she's back in South Riding, I like to think Mrs. Beddows will keep an eye on her. Lydia lives up to her academic promise and goes to Oxford, and Sarah gets her longed-for new school building (just don't think about the months - at least - that the show crammed into the final five minutes). And I like to think that Sarah will live up to the promise of her introduction - that, having shed some of her immaturity and naivete, she's grown into a teacher to cheer for.

I plan on watching South Riding on DVD, as I'm curious what the full three-hour program looks like. Historically the "missing" 6-10 minutes PBS trims from Masterpiece productions for ads more often than not vastly improve the tone and flow of the show. I'd also like to read the novel - since it clocks in at over 500 pages, I'm confident that there is a wealth of character and story development that, due to the budget constraints of cramming the story into three hours, were trimmed or cut beyond recognition.

While South Riding did not live up to my expectations, it was an interesting and well-filmed period piece, gorgeous to look at - full of great detail and delicious 1930s costumes. This is not a "happily ever after" for all story, and I just wish that Masterpiece viewers had been given the luxury of five or six hours to see this little-known classic brought to life - I think more time would've helped my reception of the show tremendously. If you watched South Riding, I'd love to hear your thoughts!

I actually just finished watching it online. I was pretty satisfied with the conclusion- much more so than I thought I could be. It is far from my favorite Masterpiece show, but I did enjoy it for the most part. :)

@Kristin - Woo-hoo, perfect timing! :) I'm glad to know I'm not the only one who felt this way about SR (that I was way happier w/ the ending than I expected). It's not my favorite - but I have to acknowledge the attempt and potential.

Interesting call on the voices!!! I could totally see Midge playing Luna's cousin or something. LOL!!

I'm kind of conflicted on this one, but I'm thinking it might be a "lost in translation" between the book and the movie version. I'm hoping to find the book and read it this summer. We'll see!

@Anne - Thank you so much for stopping by my blog and commenting! I am SO excited to read your upcoming novel, Wings of a Dream later this year!

Re: South Riding - I suspect you are correct. I didn't hate it, but I didn't love it (which is typically my "default" Masterpiece reaction). :)