Once Upon a Time preview

I was thrilled to see a trailer debut today for ABC's own fairy-tale themed show coming this fall, entitled Once Upon a Time. It'll be interesting to compare this show with NBC's Grimm - while I'm intrigued by both, at this point I've got to say I'm leaning towards Once being guaranteed must-see TV for me. 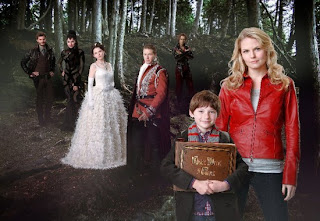 Here's the press release about the show (from Daemon's TV):

Synopsis: From the inventive minds of “Lost” executive producers Adam Horowitz and Edward Kitsis comes a bold new imagining of the world, where fairy tales and the modern-day are about to collide.

And they all lived happily ever after – or so everyone was led to believe. Emma Swan knows how to take care of herself. She’s a 28-year-old bail bonds collector who’s been on her own ever since she was abandoned as a baby. But when the son she gave up years ago finds her, everything starts to change. Henry is now 10 years old and in desperate need of Emma’s help. He believes that Emma actually comes from an alternate world and is Snow White and Prince Charming’s missing daughter. According to his book of fairytales, they sent her away to protect her from the Evil Queen’s curse, which trapped the fairytale world forever, frozen in time, and brought them into our modern world. Of course Emma doesn’t believe a word, but when she brings Henry back to Storybrooke, she finds herself drawn to this unusual boy and his strange New England town. Concerned for Henry, she decides to stay for a while, but she soon suspects that Storybrooke is more than it seems. It’s a place where magic has been forgotten, but is still powerfully close… where fairytale characters are alive, even though they don’t remember who they once were. The epic battle for the future of all worlds is beginning, but for good to win, Emma will have to accept her destiny and fight like hell.

“Once Upon a Time” was written by Edward Kitsis and Adam Horowitz, who are also executive producers, along with Steve Pearlman (ABC’s “V”). The pilot is directed and executive-produced by Mark Mylod (“Entourage”). “Once Upon a Time” is from ABC Studios.

And here's a trailer:

And  brief show clip (I assume from the premiere):

Hmmm...this sounds like my cup of tea! I haven't seen any previews for it on tv, either, but I'm pretty sure I'll be watching it. :o) Reminds me a little bit of The 10th Kingdom.

COOOOOL. When do they air?

@Christy - Good call on The 10th Kingdom similarities! My parents have that DVD set, I should borrow it. :)

@Jenny - It does, doesn't it? Disney owns ABC, right? If they really get behind promoting this show I think that it could make it!

@Juju - I think I read this one is going to air Sunday nights, starting this fall.

I think I better watch it before it's canceled.

Hehe, my first thought was 'she was on her own since abandoned as a baby? That's some self-sufficient baby!' lol.
But this sounds really interesting! Love Ginnifer Goodwin and glad to see the girl from House in something big. Will definitely have to check this out!~

@heidenkind - We are thinking the exact same thing! LOL!

@Heather - HAHA I hadn't gone there but you're right!!! Too funny!

I've been a big fan of Ginnifer Goodwin's since Mona Lisa Smile, so I'll definitely be checking this out! :)

@Roving Reader - I totally forgot she was in that movie, thanks for the reminder!