Review: Jane and the Wandering Eye by Stephanie Barron 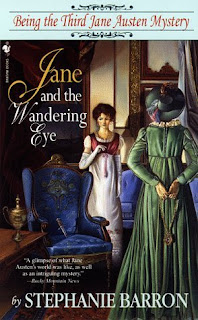 As Christmas of 1804 approaches, Jane Austen finds herself "insupportably bored with Bath, and the littleness of town." It is with relief that she accepts a peculiar commission from her Gentleman Rogue, Lord Harold Trowbridge - to shadow his niece, Lady Desdemona, who has fled to Bath to avoid the attentions of the unsavoury Earl of Swithin. But Jane's idle diversion turns deadly when a man is discovered stabbed to death in the Theatre Royal. Adding to the mystery is an unusual object found on the victim's body - a pendant that contains a portrait of an eye! As Jane's fascination with scandal leads her deeper into the investigation, it becomes clear that she will not uncover the truth without some dangerous playacting of her own...

In 1804, Jane Austen is resigned to a lackluster Christmas season in Bath with her family, until she receives a commission from Lord Harold Trowbridge. The Gentleman Rogue and Jane’s friend and ally through two recent criminal investigations, Lord Harold requests Jane bring her considerable powers of observation to bear on the activities of his niece, Lady Desdemona. Having fled from the unwanted attentions of an ardent suitor, Desdemona takes up residence with her grandmother, the Dowager Duchess of Wilborough. Jane’s first opportunity to observe Lord Harold’s family is at a masquerade party the Dowager holds in honor of the Theatre Royal. But the festive atmosphere is disrupted when a tragedy worthy of Shakespeare unfolds before the horrified audience. The theatre group’s manager is found stabbed to death, with Desdemona’s brother, the Marquis of Kinsfell, standing over the body. With murder most foul casting its dark shadow over the Trowbridge family, Lord Harold descends upon Bath to solicit Jane’s help in clearing his nephew’s name. Time is running out for the Marquis, and with a miniature portrait of a stormy grey eye as their only clue, Lord Harold and Jane must work furiously together to unravel truth from fiction before one of them becomes the murderer’s next target.

Jane and the Wandering Eye is the third of Stephanie Barron’s mysteries featuring the famous author as amateur sleuth, and while it seems clichéd to say it, each adventure seems better than its predecessor. Once again, one of the most fascinating aspects of this series is the way in which Barron grounds her plots in the known facts of Austen’s life. Jane’s aversion to Bath is well-documented, and she made good use of her time there and penchant for lampooning ridiculous excess as the city is prominently featured in both Northanger Abbey and Persuasion. Therefore it is not too much of a stretch to thrust Jane into the tangles of an investigation involving the highest echelons of Bath society and arts and entertainment that made the city a social hotspot in its heyday. Barron delves deeply into the theatrical and artistic world of Jane’s time, populating her mystery with fascinating real-life characters like renowned miniaturist Sir Richard Cosway and painter Thomas Lawrence, the latter’s romantic entanglements with two of actress Sarah Siddons’ daughters have unexpected ramifications on Jane’s investigation. Barron has a knack for imbuing her novels with rich historical detail, from the cultural mores of Regency society down to detailed descriptions of the clothing, all combining to make Wandering Eye Jane’s most satisfying foray into the realm of detection yet.

I’m particularly partial to Barron’s Gentleman Rogue. This brooding, enigmatic spy is the perfect foil to match wits with Jane’s legendary wit, and this third volume relies heavily on the development of their relationship which is a joy to savor and watch unfold on the page. Since of course Austen never married, Barron has set herself quite the challenge in placing men in Jane’s life that could pique her interest, worthy of her intelligence and quick mind. Lord Harold, with his considerable political and social clout rises to the occasion on all points, and to have an entire novel that so prominently features the delicious push-and-pull of his interactions with the incomparable Jane is a rare treat indeed. I also loved the renewed focus Barron places on Austen’s family life. One cannot help but see some humorous similarities between the Reverend and Mrs. Austen and the fictional Mr. and Mrs. Bennet, and their familial interest in the reputation and future of their unmarried daughters. Wandering Eye is smartly plotted and liberally littered with plausible red herrings, resulting in the strongest Austen mystery yet in the series. Capped with a voice that is undeniably Austen-esque in its tone and humor, Barron’s third Jane mystery is a thoroughly absorbing read for Austen aficionados and an informative glimpse into a glittering, forgotten world.

I can't wait to get to this one -- I find the "eye portrait" fascinating and something that is new to me.

@Joanne - Thank you! The eye portrait was a new concept to me, thanks to this book - so fascinating! Hope you enjoy this one as well!