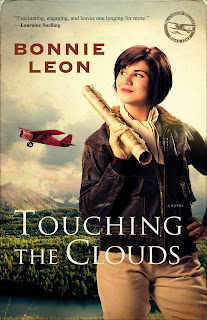 Kate Evans is an adventurous and independent young woman with a pioneering spirit. When she leaves her home in Washington State to follow her dream of being an Alaskan bush pilot, she knows it will be an uphill battle. But she never expected it to be quite like this. As the lone woman in a man’s world, she finds that contending with people’s expectations is almost as treacherous as navigating the wild arctic storms.
When she crosses paths with a mysterious man living alone in the forbidding wilderness, she faces a new challenge. Can Kate break through the walls he has put up around his heart? And will fear keep her from realizing her dreams?

Book 1 in the Alaskan Skies series, Touching the Clouds will draw you in with raw emotion and suspense, all against the stunning backdrop of the Alaskan wilds.


Kate Evans is an unconventional woman living in a most unusual time. With the country in the middle of the Great Depression, she longs to make a living doing what she loves most – flying, a most uncommon profession for a woman. Running from painful memories and seeking to make her mark on the world, Kate leaves her parents’ farm in Washington State and takes off for Alaska with the goal of making a living as a bush pilot. When she arrives in Alaska, making her dream a reality proves to be more difficult than she’d imagined. From coping with the prejudices of those who question her piloting ability because she is a woman, to surviving Alaska’s ever-changing, dangerous nature, Kate fights to prove herself at every turn. As two romantic possibilities emerge, Kate has to decide if she can conquer her past fears in order to fully embrace life in her adopted home.
Touching the Clouds represents two first-time experiences for me. It’s my first time to read a Bonnie Leon novel, and it is the first time I’ve come across a novel with this unique setting and time period. If you’re interested in Alaskan history, there is an abundance of historical fiction available set during the 1800s, but this is the first I’ve come across set during the 1930s – and I really do love reading about this time period. The Depression and the challenges that faced people during this time, coupled with a unique profession like Kate’s, make for fascinating reading. When reading about Kate’s struggles to establish herself as a pilot, I kept remembering the 1939 Cary Grant/Jean Arthur film, Only Angels Have Wings, about a band of mail pilots in South America. While the settings couldn’t be more different, Leon does an excellent job capturing the feel of a rough-and-tumble flying operation, similar to Grant’s outfit in the film. The challenges and unexpected situations pilots face, as well as the camaraderie that can develop among individuals bound by their love of such dangerous work, is well developed throughout the course of the novel.

The best way I can think to describe Clouds is that it reads like a “slice of life” story. The biggest obstacle faced by the main characters are their own internal fears and struggles – and sometimes that’s just the way life is, working through issues with victory to be found in getting through each day. That is Kate’s story. I do there had been more relationship development in this book – the romantic element, while barely there, felt really rushed at the end of the book – but perhaps there is more to come in future novels. The strength of this story is Leon’s research. The flying sequences really shine, and Kate’s wildly varied adventures as she learns the ropes of being a bush pilot – from assisting in a birth to wilderness survival – are my favorite parts of the book. Leon subtly weaves the theme of relinquishing fear and living in faith through the lives of her characters, who are very real, broken people in need of restoration. Well-drawn characters and an endlessly fascinating setting make Touching the Clouds shine – I look forward to the sequel!
Posted by Unknown at 11:02 AM

Ruth, thank you for the wonderful review.

And there is a lot more to come. Paul and Kate have lots of adventures in front of them and oh so much to learn.

Grace and peace to you,

@Juju - Thanks! I really did enjoy it.

@Bonnie Leon - Thanks so much for stopping by my blog again! And thanks for the sneak peek into the future of the series - I am looking forward to it!

One more thought. I meant to mention it. In reference to Alaska and the time period. I wrote a series several years ago called "The Matanuska", which includes "Valley of Promises", "Worthy of Riches" and "Home at Last". The series begins in 1935 and carries the reader to World War II in the final book.

@Bonnie - Thank you so much for letting me know about your other series!

Ruth, I hope you get a chance to read them and enjoy them.

A really great review! I chose it as one of my top reviews of this book on my blog.

Touching the Clouds by Bonnie Leon had numerous tricks and turns that kept me turning one page after another well into the night.

My full review can be found at my own site www.tracysbooknook.com

@tracysbooknook - Thanks so much! Glad you enjoyed this book too!

Sorry! I need to use that preview feature a lot more!

Anyway, fantastic writing Ruth! I would love it if you would do a guest post on my blog someday!

@tracysbooknook - My email is in my profile page here on Blogger - email me and maybe we can set something up. Thanks again!

If you enjoyed Touching the Clouds, you might be interested in the contest Bonnie Leon is running on her web site right now to promote book two, Wings of Promise. The winner receives a $350 Escape to Alaska prize package with some really cool gifts in it.

You can see the contest here:
BonnieLeon.com

@Emily - Thanks so much for stopping by my blog - I hope to read Wings of Promise soon, and I have actually entered that contest. :)