David Suchet on the Orient Express 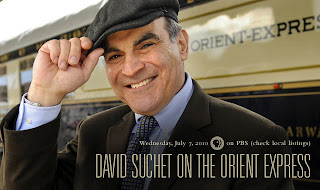 I know this is really late notice, but if you're interested check your local PBS listings for a Masterpiece special airing this evening - David Suchet on the Orient Express. Here's a bit about the show:

Celebrated actor David Suchet sets aside his alter ego Hercule Poirot to step aboard one of the world's most iconic trains in the documentary David Suchet on the Orient Express: A Masterpiece Special. From London, Suchet travels to Calais in northern France to board the Venice Simplon Orient Express, and begins his 2,000-mile journey through six countries, with a breathtaking stop in Venice on the way to Prague. The delightful Suchet revels in the artistry and beauty of the train, and explores its attraction for Agatha Christie, who used it as the setting for one of her most recognized novels. With the incisive inquisitiveness of Poirot, Suchet also traces the history of the Orient Express from its elegant beginnings to its tumultuous final days, and how its legacy has lived on. Come aboard for a charming and insightful view of the timeless Orient Express.

@Juju - I know! It's going to be odd, though, watching Suchet as Suchet, instead of as Poirot. ;)

Oh-so this isn't another remake of Murder on Orient Express? For some reason I thought it was.

@heidenkind - The Orient Express remake is coming Sunday night during the regular Masterpiece Mystery broadcast. For this special, the David Suchet was sent on a train trip to experience what Poirot would have during the novel - it was really cool!

That sounds so interesting! I wish I could watch it! No time!

@phylly3 - It turned out to be a fascinating show - maybe you can catch it on DVD (I think it's part of the upcoming Poirot release at the end of July - at least I hope so).

It is great news that you have shared over here. Though it is little bit late but then also you have done nice work. A celebrity actor travels in train is really good thing and Orient Express is truly beautiful and superb train.
Orient Express Trips