Review: Far in the Wilds by Deanna Raybourn 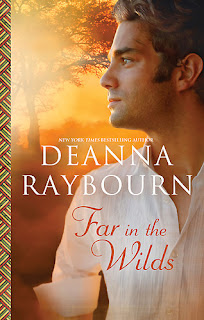 With this slim novella, released as a prequel to A Spear of Summer Grass, Deanna Raybourn -- best known for her superb Lady Julia Grey mysteries -- introduces a new leading man, hunter Ryder White. Canadian by birth and African by choice, following the conclusion of the Great War Ryder chose to lose himself in the wilds of Kenya, taking the the occasional guide job or indulging in an affaire de coeur with any one of the lovely female European expatriates all too eager to succumb to his rugged charm. When a minor member of the Danish royal family wants to mark his stay in Kenya with a big-game kill on a hunt led by Ryder, the enigmatic guide agrees -- but only so he can determine the prince's mark, an animal that's gone rogue. But when the prince's mistress sets her sights on Ryder, she unwittingly sets in motion a dangerous chain of events that unleashes a threat greater than any in the wild that Ryder's ever faced -- the power of a heart scorned and a man humiliated, a threat the hunter is ill-equipped to comprehend.

Oh, this was SO much fun people! Not only is this a thoroughly delightful change-of-pace and setting from Raybourn's superb 19th-century historicals, but it is quite simply a rollicking good adventure. I adore the classic Stewart Granger film King Solomon's Mines, and Ryder is very much cut from the same cloth as the Allan Quartermain of literary legend. A brooding alpha male, burdened by secrets and loss, determined to protect his heart -- Ryder is a hero practically begging to meet his romantic match, and I for one cannot wait to see how his story unfolds in Raybourn's full-length follow-up.

Far in the Wilds is old-fashioned adventure and high romance at its finest. Within its slim pages Raybourn transports readers to a world of startling beauty and life-threatening danger. While Ryder is arguably a little *too* invincible, able to face down death by leopard with just his arm and sheer force of will, it works. I like my brooding, smoldering heroes (hello BRISBANE), and in Ryder Raybourn has crafted a larger-than-life character that stands comfortably alongside the pulp fiction heroes such as Quartermain and his ilk who perhaps inspired him. This slim volume is a thoroughly entertaining introduction to Ryder's world, replete with Raybourn's trademark sharp characterizations and wry humor -- this is a hero I'm eager to revisit in A Spear of Summer Grass. *wink*

New York Times bestselling author Deanna Raybourn takes readers into Africa during the height of British colonialism, to meet a man as wild as the land he loves in this prequel novella....

Ryder White is Canadian by birth but African by choice. He is more at home in the wilds of the savannah, shooting and sleeping his way across the continent, than amongst the hedonistic colonists of Kenyan society.

In a landscape where one false move can cost a man his life, Ryder's skill as a guide is unparalleled, but only the rich or royal can afford his services. When a European prince hires Ryder to help him hunt an elusive leopard Ryder thinks it's just another well-paying job with yet another spoiled voyeur. But this perilous journey is full of dangers that may change Ryder forever....

Ryder returns in A Spear of Summer Grass by Deanna Raybourn, where he encounters a woman from a very different world, to explore beauty and darkness and what is truly worth fighting for.
Posted by Unknown at 7:45 PM

@Tasha - Wait until you read how he kills the leopard. INSANE!! :)