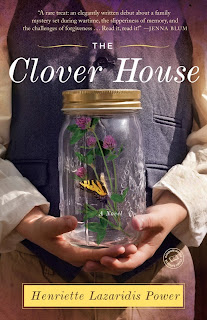 Calliope "Callie" Brown, a first-generation Greek-American living in Boston, is shocked when she receives a phone call from her cousin notifying her of their uncle Nestor's death, and that she has been named heiress of all his worldly goods. At first uninterested in claiming the unexpected bequest, Callie's interest is piqued when her estranged mother Clio, who returned to her Greek homeland following the death of Callie's father, makes a rare call in an blatant attempt to dissuade Callie from fulfilling her uncle's dying wish. Eager to escape her commitment-ready boyfriend, Callie makes arrangements to journey to Patras, Greece, determined to discover a clue among her uncle's possessions to her own thorny relationship with her mother. As a child, Callie was captivated by her mother's stories of growing up in Greece, stories that painted an almost idyllic portrait of life in a world that was, in actuality, riddled by conflict. But her mother's stories are the only truth Callie knows, a truth she stubbornly clings to in the face of familial discord and her own increasingly fractured life. The deeper Callie delves into her uncle's treasures, the closer she comes to uncovering truths about her mother and family that threaten to fracture already-fragile bonds, unless those involved choose to accept Nestor's final bequests -- the light of truth and the balm of forgiveness.

The Clover House possesses a fascinating premise -- combining Callie's contemporary search for meaning and identity with stories from her mother's childhood, Power spins a highly-relatable tale of tension-fraught parent-child relationships peppered with the fascinating (and arguably generally un-studied) history of Greece during and after the second World War. As an amateur student of the era, I loved the opportunity Power provides of diving deep into the wartime experiences of a culture and its history that in my experience has not been given wide exposure in books or films. Through Callie, Power taps into not only I think a very human tendency to romanticize the past, but as her mother's story is gradually meted out throughout the novel it becomes a powerful exploration of how the past informs the present, and how secrets -- kept for good or ill -- can crack the foundation of relationships.

While I thoroughly enjoyed the idea behind The Clover House, and the gradual unfolding of the mystery surrounding Clio's life, I was struck over and over by the devastating lack of any sort of maturity or emotional health as exhibited by both Callie and her mother. Immaturity is more excusable of course in the chapters detailing Clio's childhood -- not only was she a teenager, eager for adult experiences, but her growing up was irrevocably changed by the advent of war -- a new norm that only those who lived like experiences could perhaps ever fully grasp. Callie, however, is another story entirely. I get that she had a terrible childhood and that she's been damaged by her parents' fighting and her mother's emotional distance. But when this novel opens she's about to turn thirty-five -- determined to destroy her boyfriend's attempts to build a future with her, getting upset when holes are discovered in her mother's DECADES OLD stories (hello, memory is not an exact science), and becoming petulant when others in her extended family don't share her obsession with their collective dysfunctional past and are more concerned with building reasonably happy lives in the present. I get that I can't (thankfully) relate to Callie's horribly skewed relationship with her mother, but what grates most is the immaturity and lack of any sense of personal responsibility for her own emotional health, for determining the trajectory of her own life, in a woman approaching her fourth decade.

Despite the fact that neither main character is particularly likable, The Clover House is a welcome addition to World War II-era fiction and a well-written, oft-times fascinating treatise on how the past, while gone, is never truly forgotten, its repercussions impacting the lives of generations to come. Power's narrative delves deeply into the richness of Callie's family heritage and provides a fascinating glimpse into Greek culture, particularly the importance of family ties in anchoring one's identity, critical in Callie's search for closure. I loved how Power intersperses the storyline with chapters from Clio's historical perspective, illuminating critical truths relative Callie's most recent discoveries. It's an effective narrative device, one I wouldn't mind seeing Power develop in subsequent novels but balanced by a protagonist who is at least marginally likable. While The Clover House didn't resonate with me quite as deeply as I'd hoped, it is nevertheless a richly-drawn and thought-provoking reading experience.

Perfect for fans of Tatiana de Rosnay’s Sarah’s Key, this stunning debut novel brings to life World War II-era and modern-day Greece—and tells the story of a vibrant family and the tragic secret kept hidden for generations. Boston, 2000: Calliope Notaris Brown receives a shocking phone call. Her beloved uncle Nestor has passed away, and now Callie must fly to Patras, Greece, to claim her inheritance. Callie’s mother, Clio—with whom Callie has always had a difficult relationship—tries to convince her not to make the trip. Unsettled by her mother’s strange behavior, and uneasy about her own recent engagement, Callie decides to escape Boston for the city of her childhood summers. After arriving at the heady peak of Carnival, Callie begins to piece together what her mother has been trying to hide. Among Nestor’s belongings, she uncovers clues to a long-kept secret that will alter everything she knows about her mother’s past and about her own future. Greece, 1940: Growing up in Patras in a prosperous family, Clio Notaris and her siblings feel immune to the oncoming effects of World War II, yet the Italian occupation throws their privileged lives into turmoil. Summers in the country once spent idling in the clover fields are marked by air-raid drills; the celebration of Carnival, with its elaborate masquerade parties, is observed at home with costumes made from soldiers’ leftover silk parachutes. And as the war escalates, the events of one fateful evening will upend Clio’s future forever. A moving novel of the search for identity, the challenges of love, and the shared history that defines a family, The Clover House is a powerful debut from a distinctive and talented new writer.

*Thanks to TLC Book Tours for the review opportunity, and my apologies for the late post!
Posted by Unknown at 2:08 PM

Thank you for the in depth review. I'm glad you found The Clover House to be thought provoking and the author to be talented! Thanks so much for being on the tour.

@LisaMM - Thanks again for the tour opportunity! :)