Once Upon a Time in Wonderland - first look! 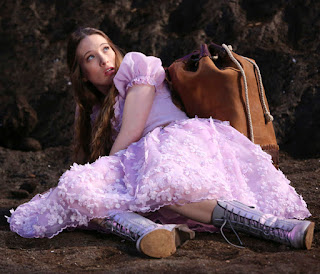 Last week the rumored Once Upon a Time spin-off received a series order from ABC and the first official image from the project was released, featuring Sophie Lowe as Alice. Here's the series description:

In Victorian England, the young and beautiful Alice (Sophie Lowe) tells a tale of a strange new land that exists on the other side of a rabbit hole.  An invisible cat, a hookah smoking caterpillar and playing cards that talk are just some of the fantastic things she’s seen during this impossible adventure.  Surely this troubled girl must be insane and her doctors aim to cure her with a treatment that will make her forget everything.  Alice seems ready to put it all behind her, especially the painful memory of the genie she fell in love with and lost forever — the handsome and mysterious Cyrus (Peter Gadiot).  But deep down Alice knows this world is real and just in the nick of time, the sardonic Knave of Hearts (Michael Socha) and the irrepressible White Rabbit (John Lithgow) arrive to save her from a doomed fate. Together, the trio will take a tumble down the rabbit hole to this Wonderland where nothing is impossible.

The title -- Once Upon a Time in Wonderland -- is ridiculously clunky, but you know I'll be watching. :)
Posted by Unknown at 10:33 AM

Email ThisBlogThis!Share to TwitterShare to FacebookShare to Pinterest
Labels: Alice in Wonderland, Once Upon a Time, Sophie Lowe

I agree the name is ridiculously long. I hope they eventually condense it to "Wonderland." I am certainly intrigued, especially since I have enjoyed Once Upon a Time.

@Lydia - I just can't think that OUATIW will stick. I mean that is ridiculous. Maybe Once in Wonderland? Or just Wonderland...but that is probably too snappy. ;) LOL! Looking forward to the first trailers!

Oh, gosh! Ruth, this is going to be EPIC! Hope it lasts cuz there can never be TOO many fairy-tales. ;)

@Rissi - I like the fact that it is a limited, 13 episode "filler" series...I think that will allow for stronger, tighter storytelling. Keeping my fingers crossed! :)

@Juju - I prefer revisionist Oz, along the likes of SyFy's Tin Man myself. ;)

Zomg noooo, I can barely handle Once! Now they want to mess with more public domain stories?

@Tasha - You know they are ALLLLL over the public domain thing. ALL OVER IT. :)

Hey, Ruth! Likely you've seen this but just in case, it's here! Check out a teaser trailer for 'Wonderland.'

@Rissi - I think we found this trailer at the exact same time, LOL!