Review: The Assassin and the Pirate Lord by Sarah J. Maas 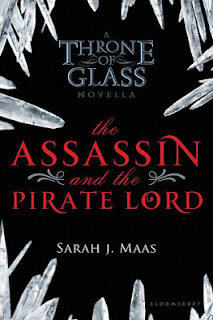 Celaena Sardothien, just sixteen, is one of the most feared and capable assassins in the empire. As the heir presumptive of Arobynn Hamel, lord of the legendary Assassin's Guild, Celaena is sent to collect tribute from the Pirate Lord of Erilea, ostensibly for the murder of three assassins in his territory. Accompanied by Sam Cortland, a fellow assassin maddening and devilishly handsome by turns, Celaena anticipates a speedy end to negotiations with the Pirate Lord -- all the better to quickly rid herself of Sam's irksome company. But when the mission turns out to have nothing to do with honorable retribution and everything to do with transporting slaves, Celaena is horrified. She and Sam concoct a daring plan to free the slaves -- but defying their orders may prove more costly than either ever dreamed.

The Assassin and the Pirate Lord is the first of four prequel novellas to Sarah J. Maas's popular full-length debut, Throne of Glass -- which I've heard described as one of the first in a wave of YA Game of Thrones-style fiction. I thoroughly enjoyed this introduction to Celaena's dangerous world. She is a feisty, strong-willed, impetuous heroine, and in just ten short chapters Maas manages to convey the harsh reality of her upbringing and vocation, giving a clear sense of the threats from within and without her circle that would strive to control such a powerful individual. This is a world inhabited with wildly varied peoples, customs, and political tensions that I look forward to seeing explored further in subsequent volumes. A fast-paced, breathlessly exciting introduction to what promises to be a richly-drawn world.

Celaena Sardothien, feared assassin, has come for retribution. Sent by the Assassin’s Guild to a remote island in a tropical sea, Celaena is supposed to be to collecting on a debt they are owed by the Lord of the Pirates. But when she learns that the agreed payment is not in money, but in slaves, her mission suddenly changes–and she will risk everything to right the wrong she’s been sent to bring about.