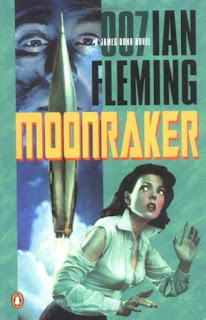 "'Benzedrine,' said James Bond. 'It's what I shall need if I'm going to keep my wits about me tonight. It's apt to make one a bit over confident, but that'll help too.' He stirred the champagne so that the white powder whirled among the bubbles. Then he drank the mixture down with one long swallow. 'It doesn't taste,' said Bond, 'and the champagne is excellent.'"

Moonraker, Britain's new ICBM-based national defense system, is ready for testing, but something's not quite right. At M's request, Bond begins his investigation into Sir Hugo Drax, the leading card cheat at M's club, who is also the head of the Moonraker project. But once Bond delves deeper into the goings-on at the Moonraker base, he discovers that both the project and its leader are something other than they appear to be...

If Ian Fleming arguably set the template for James Bond's adventures with his second novel, Live and Let Die -- exotic locales, beautiful women, incredible escapades -- he immediately turned what has become the standard "Bond formula" on its head with his third novel, Moonraker. The action of Moonraker never leaves England, the resulting product a tautly-scripted suspense novel that is my favorite entry (thus far) in the series. The novel opens with Bond settling in for what appears to be a routine week of office work, until he is summoned to an unexpectedly personal meeting with M to discuss Bond's impressions of the latest media darling -- Sir Hugo Drax, industry magnate, whose plans to build a super rocket for the defense of England, with a range covering Europe -- the ultimate military deterrent in the new post-war nuclear age. But M has discovered something disturbing about the enigmatic "savior" of England -- Drax is a card cheat. Bond earns Drax's ire by trouncing him at a high-stakes bridge game -- a rivalry that makes Bond's temporary homefront reassignment to Drax's missile project, replacing the recently-murdered security officer. With the help of a beautiful and savvy Gala Brand, an undercover Special Branch operative, Bond is determined to protect the Moonraker project from sabotage, but the threat to England's best hope for nuclear security is closer than he ever dreamed. With the missile's test launch mere days away, Bond and Gala find themselves caught in the midst of an insidious plot to strike at the very heart of England against an enemy who will stop at nothing to silence their investigation.

I loved this book. LOVED it. If Fleming had stopped here, I'm convinced that this novel and Casino Royale would have marked him as a master of the spy thriller. If Bond -- and by extension, his creator -- are known for outlandish plots, stereotyping, and the objectification of gorgeous women, Moonraker dares to crush those assumptions with Fleming's deft plotting and characterizations. First published in 1955, Fleming's nuclear missile storyline plays into the public's newly-awakened postwar fears concerning the possibility of a nuclear war. And by placing the entirety of the action on English soil, Fleming brought those fears home to his readership. The Blitz had awakened England to the realization that their island state was not immune from enemy attack, a realization and a fear that Fleming explores through first the hope of the Moonraker as insurance and the fight to keep that technology from turning on the very public that embraced its aim and its creator.

Like Casino Royale, easily a good third of this novel is set around the action of a pivotal card game. I simply adore reading Fleming's accounts of Bond's battles waged across the length of a card table. This is a plot device that could easily misfire in the wrong hands, but Fleming was clearly a master of his craft and an adept at cards. With his economical, fluid prose, his account of Bond's schooling of Drax at bridge is masterfully done. The depths to which Fleming used this construct to explore both Bond's psychological state as well as his opponent's are extraordinarily well done, a suspenseful sequence that is a brilliant set-up for the action that follows against the broader scale of the Moonraker launch and the threat of sabotage against the heretofore flawlessly run project.

Bond is at his best here, the perfect mix of dedicated agent, patriot, and very human, very fallible man capable of great feeling, with an equally great capacity for triumphs and failures. His counterpart here is Gala Brand, far more than typical "Bond girl" eye candy -- this is a character with surprising (considering the source) fire, intelligence, and training, more than capable, as Bond reflects, of hitting him where it hurts. *wink* While Bond is still Bond, physically desiring Gala, in a welcome twist she is a capable investigative partner, one who likes him, but manages to refrain from succumbing to his "legendary" charms. They make a memorable pair, and I love their relationship arc -- well done, Fleming.

Drax is a fascinating character. Per the Bond formula norm, he is a larger than life spectacle, full of annoyingly crass manners, limitless funds, and apparently rock-solid patriotism. I've always been fascinated by the idea of sleeper villains (such as Raymond Shaw in the shortly to-be-published 1959 classic The Manchurian Candidate), and pair that with a plot involving a Nazi plot a decade in the making -- it's the recipe for a surefire success. Drax is full of self-loathing, hell-bent on destroying his childhood and wartime demons through a brilliantly-conceived long con that might have succeeded -- if not for his inability to resist cheating at cards. In him, Fleming has crafted a unforgettable arch-villain with a surprisingly human Achilles' heel.

Sadly for Bond film fans, by the time the franchise looked to adapt Moonraker to the big screen Fleming's intimate little plot was largely discarded in favor of an attempt to cash in on the Star Wars craze, which is tragic when once considers the strength of the source material. Interestingly enough, though, I was struck by Drax's similarity to Toby Stephens's Gustav Graves in Die Another Day (only with the added spectacularly weird genetic therapy thing). Moonraker is a fantastically good outing in the Bond universe, a brilliantly-plotted, solid thriller that delves unexpectedly deeply into the psyche of Britain's most enduringly famous secret agent. This, my friends, is why Bond is a classic.