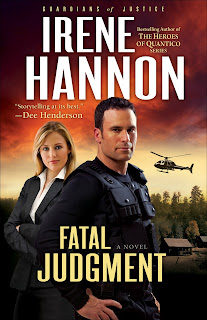 Fatal Judgment (Guardians of Justice #1)
By: Irene Hannon
Publisher: Revell
ISBN: 978-0-8007-3456-5
About the book:
U.S. Marshal Jake Taylor has seen plenty of action during his years in law enforcement. But he'd rather go back to Iraq than face his next assignment: protection detail for federal judge Liz Michaels. His feelings toward the coldhearted workaholic haven't warmed in the five years since she drove her husband - and Jake's best friend - to despair...and possible suicide.
As the danger mounts and Jake gets to know Liz better, he's forced to revise his opinion of her. And when it becomes clear that an unknown enemy may want her dead, the stakes are raised. Because now both her life - and his heart - are in danger.
Full of suspense and romance, Fatal Judgment is a thrilling story that will keep you turning the pages late into the night.
Review:
The last thing U.S. Marshal Jake Taylor wants is a high-profile protection case that places him anywhere in the vicinity of the widow of his best friend from college – federal judge Elizabeth Michaels. Convinced that the woman’s single-minded drive to advance her career destroyed his friend, Jake determines to maintain a strict professional distance. But his resolve is tested when it becomes apparent that Liz’s sister was murdered in a tragic case of mistaken identity, and the judge herself was the intended victim. Grief-stricken and vulnerable, the woman Jake gets to know is nothing like the prejudiced mental image he’d carried with him for years. Intensely private and dedicated to her work, Liz had never understood the animosity Jake had projected during their few brief encounters years before. Struggling to cope with the guilt of a failed marriage and the brutal loss of her last surviving family member, Liz struggles to cling to her faith while her world spirals out of control. When the murderer gets a second chance to eliminate Liz, Jake finds himself in a race against time to save the life of the last woman he ever expected to invade his heart.
The first book in Hannon’s newest series focuses on a new branch of high-stakes law enforcement – the U.S. Marshal Service. I was thrilled to see brief appearances from Matt and Nick, FBI agents who previously “starred” in her superb debut Heroes of Quantico series. From the opening pages, it’s clear that Hannon has once again done her homework into the protocols and the logistics involved in a high-profile protection case. She excels at immersing the reader in the high-stakes, fast-paced world of the investigation, from evidence retrieval to inter-agency cooperation. Hannon’s stories have a ripped-from-the-headlines relevancy that will keep you breathlessly turning the pages until the novel’s conclusion. Especially given the recent tragic events in Arizona, Fatal Judgment’s focus on a deranged individual’s determination to make a misguided statement by taking down a public official lends the novel a jolting sense of realism – a legitimacy that can often be lacking in romantic suspense. This is just one of the many reasons I love Hannon’s suspense novels – the stories she crafts are compulsively readable because they are so incredibly well-researched and chillingly possible.
Irene Hannon has officially become my go-to author for quality romantic suspense. I love her heroes – she writes the male point-of-view extremely well, and U.S. Marshal Jake Taylor, member of the service’s elite Special Operations Group, is no exception. I was thrilled to see his relationships with his siblings and dedication to work and family play out on the page adding heart-warming depth to his character. And Hannon's heroines are no shy wallflowers either, who wilt in the face of danger. Despite the heartbreak of a failed marriage and the horror of her sister’s murder, Liz is a fighter. Passionate about her work and dedicated to her faith, Liz’s determination and occupation add a unique and relevant element to the storyline. I loved the fact that Jake and Liz had a complicated history to work through. Despite the accelerated pace of their relationship, the mere fact that they have shared “baggage” to work through is a refreshing change from stories where couples who’ve just met fall in love.  While the novel opens with a bang, the middle section setting up the final showdown lags a bit. But when the pace picks up I absolutely could not put this novel down. With a subtly woven faith element that felt completely organic to the storyline and characters, Jake and Liz’s journey to overcome past scars in the face of life-threatening danger results in a compelling, un-put-downable read. Hannon has once again delivered a tautly plotted thriller with a swoon-worthy hero, sizzling moments of romantic tension, and a realistic threat – all elements that have made her a star author of romantic suspense. I absolutely cannot wait for the thrill ride she’ll take readers on next!
Posted by Unknown at 8:19 PM

Wow, Ruth! Thank you for the superb, detailed and well-thought-out review of my latest book.

This series actually features the Taylor siblings, so Alison's story is up next. U.S. Deputy Marshal Jake will be back, but the focus won't be on the Marshals Service. Instead, we'll get up close and personal with the St. Louis County Crimes Against Persons Bureau and its newest member, a colleague of Cole's. Watch for Deadly Pursuit, coming in September!

@Irene - Oh, you are welcome, Irene! Thank you for stopping by & commenting! :)

And thanks for the update/clarification on the future books in the series - I've clarified that in my review. I am really looking forward to reading Alison's story!