I originally reviewed My Boy Jack back in April 2008 on my old blog when it first aired on Masterpiece. I'm keeping my original review intact with only a few extra comments thrown in. :) This film had a powerful impact on me when I first saw it, and I want to keep that "documented" on this blog, I guess you could say. 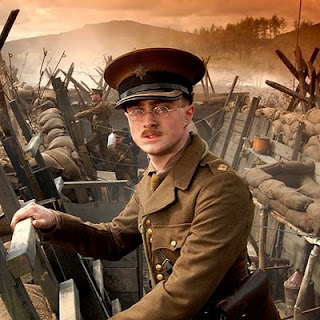 I knew I was probably going to cry when watching My Boy Jack last night. War movies tend to have that effect on me. I’d read enough about the story and the Kiplings online to realize that this film wasn’t going to end happily. However, I didn’t expect to respond to the film on the deep, personal, gut-wrenching level I did last night. I didn't expect to weep, tears dripping down my cheeks. I didn't think that somewhere along the line, Jack Kipling would become my friend Christopher, who died a little over four years ago, just shy of 23 (Edit: Make that over six years now...wow, that blows my mind just thinking about the passage of time! Miss you, Chris.). I've been prompted to mull this film over off and on today - I can't "shake it" because it was much more personal and thought-provoking, deserving much better than the label of entertainment. My Boy Jack was much, much more than a war story, or a biographical film – it drove home the unspeakable tragedy of lives gone too soon, cut short by the likes of war, illness, or accident, in a fresh, deeply personal, way.

My Boy Jack is a perfect example of Masterpiece Theatre programming at its finest. The script, direction, and acting are all superb. The film is based on the play MBJ written by David Haigh, who portrayed Rudyard Kipling on stage as well as in the film. I believe the fact that Haigh wrote the source material and adapted his own play for the script helped his passion for the subject matter translate to the screen. He also bears a striking resemblance to Rudyard Kipling himself: 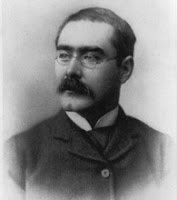 The film definitely renewed my interest in Kipling's writing. I read The Jungle Book back in college as part of my Victorian Children's Lit class cirriculum and loved it. The man was a gifted storyteller and MBJ does a wonderful job of bringing out Kipling's childlike enthusiasm for storytelling and adventure. The juxtaposition of Kipling's enthusiasm for his stories and life make the tension in his family and the pain felt over Jack's loss almost unbearably poignant.

Kim Cattrall as Carrie Kipling was an absolute revelation. I'll admit going into the production that I thought she would be the show's "weakest link." However, I found her performance absolutely riveting and as the show progressed, completely and utterly convincing. Her strength, determination, and grief over Jack's loss is heartbreaking to witness.

Carey Mulligan played Jack's sister Elsie. I think this is her most impressive performance to date (she's previously appeared in Bleak House and Northanger Abbey, to name a few). She doesn't have all that much screen time, but when she's present she leaves an impression. I've said it before but it bears repeating - hers is a career to watch. (Edit: I had no idea how right I'd be about Mulligan's career when I typed that statement in 2008. If you've never seen An Education, check that movie out at the first opportunity. You can read my review here.)

And last but definitely not least, Daniel Radcliffe gives a fantastic turn as Jack Kipling. My Boy Jack is Radcliffe's first television role since his film debut as the young David Copperfield in the 1999 Masterpiece Theatre production. Now that's he's forever linked to his role as Harry Potter, seeing him playing any other character takes a bit of getting used to. However, MBJ proves to be a great vehicle for Radcliffe, and the project and his costars gave him ample opportunity to develop his acting chops. (Edit: Radcliffe has just gotten better and better acting-wise, hasn't he? I thought he did a fantastic job in part one of Deathly Hallows, and once his Potter career closes I look forward to seeing what other projects he pursues - I hope he doesn't rule out further Masterpiece appearances!) He also bears an eerily striking resemblance to John Kipling:

As Jack Kipling, Radcliffe radiates a strength and willpower far beyond his years, but balances that with glimpses of doubt and uncertainty. Jack appears to have been a bright, extraordinarily determined young man, who had multiple opportunities to avoid serving in the army thanks to his cripplingly poor vision. However, he refused to accept any limitations and when his father's influence resulted in a commission in the Irish Guards, Jack worked hard to distinguish himself and earned the respect of his comrades-in-arms. Jack's death is a tragic example of the potential lost when an entire generation of young men were practicually wiped out in the trenches of World War I.
One of the many reasons this film is so extraordinary and thought-provoking is that it doesn't take sides when it comes to the issue of war. Particuarly in these times, and in the hands of the wrong writer or filmmakers, My Boy Jack could have been turned into some sort of propaganda piece. Thankfully, this film doesn't go there - instead, it's a film about family, patriotism, loss, and the horrible, wrenching cost of conflict.

Like Jack Kipling, my friend Chris was an extraordinarily gifted young man whose life still feels like it was cut short far too soon. As I watched My Boy Jack, I found myself grieving anew for Chris and for those who are snatched by death at far too young an age, setting the world upside-down as parents are forced to mourn their children, and uncalculable potential is lost. Rudyard Kipling, filled with self-recrimination after Jack's death, wrote "If any question why we died, tell them, because our fathers lied." There are no easy answers, but I was reminded in a fresh and powerful way that while life is hard, my God is sovereign...and I am thankful I have Him to trust in. 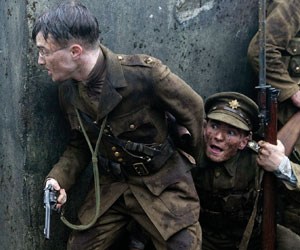 Thank you for sharing your heartfelt thoughts with us! I confess that I personally don't think I should have watched this just now... I was bummed that I was going to miss the first half or more of the movie because we were watching something else, but then we switched to the last half hour of My Boy Jack. It was definitely heart-wrenchingly sad! The last scene is so powerful. That poem...wow!

Anyway, it's not because what I saw didn't seem good. I just feel really selfish for making my parents watch that last part with me after we had just watched a cute episode of Bonanza right before it. Not the best way to end a good evening together. :(

Sorry that I'm bringing a sad note here, as well! From what I saw, though, it really did seem like a powerful movie.

In between writing the last two chapters of my book, I took a break and watched MBJ---oh, man, I bawled almost as much as I did watching it the first time . . . more if you consider that I started tearing up earlier in the film because I knew what was coming.

After watching this again, I can't WAIT to see DH Part I, just to compare Daniel Radcliffe's performance in the two.

I watched this last night, and wow...I hardly ever watch war movies, but this one definitely made an impression. I think I usually have a romanticized view of war time (from musicals, my love of the 40s, etc.), but this movie definitely set me straight. It was so heartbreaking!

I give Daniel Radcliffe much more credit than I did previously. :) And I love Carey Mulligan.

@Amber S. - Oh girl, thanks for reading! :) I hope that as time goes on, maybe if you make the decision to watch the entire film, you won't regret it. It's a difficult movie but it's one of the rare ones that I think are so important, at least to me anyway. :) And no need to apologize, it's a movie that encourages powerful reactions, and I think the sad as well as the fun or uplifting can be equally important to discuss. Balance is the key. :)

@Kaye - Oh, it had me choked up as much as I did when first viewing it too! I think the only reason I wasn't bawling is because I was with my parents, and we missed the first part because the TV guide said our PBS station wasn't airing it. Go figure. Can't wait for you to see DH Part 1 either. :)

@Kristin - So glad you got to watch this film! Since I share your love of the 1940s and classic Hollywood, I tend to get the romanticized view of wartime in my movie choices as well - so that is one reason, I think, that I appreciate MBJ so much. It helps balance that out, if that makes sense.