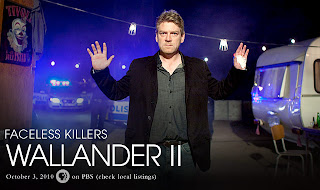 Poor Wallander got the short end of the stick on the blog this year, I’m afraid. Due to time constraints and various other issues that came up when Series II aired a few weeks ago on Masterpiece Mystery, I was unable to review the episodes as they aired. Now that Series II is on DVD, I’m hoping to rectify that situation. Better late than never, right? Last year Wallander was a great surprise. Thanks to some less than intriguing (in my view at any rate) previews, I’d nearly made the mistake of writing off the show entirely despite my long-time appreciation of lead actor Kenneth Branagh. Thankfully, I didn’t make that mistake – Wallander is the perfect vehicle for Branagh’s acting talents, and the stories are wholly absorbing. The first episode of Series II was ominously entitled Faceless Killers. Here’s the story summary from the PBS website:


An elderly couple is brutally assaulted in their rural farmhouse. As Swedish inspector (Kenneth Branagh) arrives at the horrific scene, he holds the old woman as she dies, shouting to her one final, urgent question — "Who did this?" She sounds out something that could be "farmer" or maybe "foreigner." But is Wallander reading into it? Is he swayed by his struggle to relate to his daughter's new boyfriend of Syrian descent? The press takes hold of the foreigner angle, inciting swift and deadly retribution against local migrant workers. But there is more to the case — a potential mistress, a lost son and a large sum of money. Wallander's inquiry takes him deep into his own damaged psyche, forcing him to examine and question his own motives before he can even begin to understand those of a killer. Faceless Killers is based on the novel by international bestseller Henning Mankell. (One episode; 90 minutes, TV-PG)

The opening scene of this episode has to be one of the most chilling in the series. An elderly farming couple, Joannes and Maria Lovgren, appear to be enjoying a quiet meal when they’re interrupted by two masked intruders. Maria’s final scream, as the camera cuts away, is positively blood-curdling. When Wallander is called to the crime scene from a dinner with his daughter, Linda (Jeany Spark, due to appear in this week's upcoming Sherlock episode!) and her new boyfriend, Jamal (Arsher Ali), he’s just in time to hear Maria’s final words. “Fffff….” – was she trying to say “farmer,” or “foreigner”? Could Wallander be projecting his own struggle over his latest war of words with his daughter, whose boyfriend is a doctor of Syrian heritage – a fact that surprised the detective, and awakened possible prejudices within him that he didn’t know he had, much less wanted to admit to or risk projecting on a case. Though Wallander refuses to commit to the possibility that Maria may have been muttering “foreigner” with her dying breath, the potential lead is leaked to the media and soon the police are dealing with an overwhelming tide of anti-immigrant sentiment. Now the overworked, stressed Wallander must try to stop revenge killings while attempting close the Lovgren case, which proves more complex than originally thought.

I have no idea how faithful these films are to the original source material, the crime novels of Henning Mankell. In fact, I’d never even heard of Mankell until Wallander premiered on Masterpiece Mystery last year. In a way I’m quite grateful for my lack of pre-knowledge about the storylines, because that allows me to approach each entry in this series with fresh eyes. The stories and character backgrounds are utterly unknown to me, so watching Wallander’s character develop over the course of this series has been a fantastic, completely absorbing treat. I do have a feeling that those with insider knowledge would probably argue that this show is a case of the Brits “doing” Swedish culture, but for me there’s enough of a difference in mood, setting, and presentation to make Wallander stand out from typical British mystery fare. The sense of atmosphere created by the filmmakers is superb – moody, creepy, and absorbing. And whether or not this version of Kurt Wallander is wholly faithful to the original novels, I absolutely love Kenneth Branagh in this show and I really feel like he was born to play this character. After every episode I feel emotionally drained, because it’s impossible not to feel like I’ve just watched a great actor pour every ounce of his heart and soul into the role.

When this episode initially aired on Masterpiece, I watched it with my mom, and we both commented on how the migrant worker aspect of the storyline felt so relevant given how that discussion has figured in the news for the last few years. It was quite eye-opening to see tension like that play out in another country, albeit within a fictional framework. Neither of us had any idea that Sweden had a vibrant Middle Eastern population, with a significant portion of those individuals apparently working as migrant workers on farms. I thought the way that Wallander tried to work through his flash of prejudice when he meets Linda’s boyfriend, and subsequently through the investigation, was handled quite honestly and realistically. Wallander is, at his core, a man who strives to constantly do good, to bring some justice to his little corner of the world. The idea that he unconsciously harbored any sort of racial prejudice horrifies him, and his reaction is quite raw, and if you let it, I think could provoke some interesting moments of self-reflection.

It’s been a while since I’ve watched the first three Wallander episodes, so my memory may be hazy, but starting with Faceless Killers it was driven home to me in a fresh way that Wallander is a character so driven to matter, so desperate to run from his inner demons that it may kill him. He’s more than good at his job, he’s brilliant, but he drowns in his work at the expense of the relationships that might just provide a salve for his wounded heart. Wallander’s relationship with his father continues to be strained as Povel’s (David Warner) Alzheimer’s continues to worsen. This ongoing aspect to the series will absolutely break one’s heart. Wallander and his father, an artist, apparently have never been able to see eye-to-eye on much of anything. But it’s obvious that Wallander cares about his father and wants to do the right thing by him, but he’s so emotionally crippled, both personally and professionally, that for every step forward he takes ten steps back (at least!).
And then there’s Wallander’s tumultuous relationship with his daughter, Linda. Branagh and Spark play brilliantly off each other each time they appear on-screen – which, quite frankly, isn’t often enough to suit me. I can’t remember exactly how long Wallander’s been divorced since the series started, but he’s continued to wear his wedding ring. There’s a part of him that refuses to let go of that piece of his past, as if by desperately holding on to the symbol of his now-defunct marriage he can somehow be a better man and father. I have to give the character of Linda a lot of credit for not shutting her father completely out of her life. She’s not always as patient as I’d like to see, given how fractured her dad is, but they both continue to try. Their relationship rather encapsulates a recurring theme of the series – life may continue to knock you down, but never stop trying, because there’s always hope, even though it may be barely a glimmer in the distance.

Between his personal and professional issues, this case brings Wallander to the breaking point. It’s interesting to see how his unraveling affects how his coworkers view and interact with him. The closest thing Wallander has to a friend is Nyberg, played by Richard McCabe. It’s not a huge role, but I love how McCabe really “gets” Wallander, and knows how to ask the right questions, and to keep trying, until he can get his friend to open up. My absolute favorite member of Wallander’s team is Magnus, played by Tom Hiddleston. I fell hard for Hiddleston when he appeared in Return to Cranford, so I was looking forward to his reappearance in Wallander. Magnus is an interesting character – I view him as Wallander’s heir or protégé. He seems to respect Wallander, but he’s not above getting frustrated with his personality and methods. Magnus is one character that I’d definitely like to see more developed in future episodes.

I thought the final scenes of Faceless Killers were superb, and exercise in brilliant acting and staging. The Lovgren case, and the violence that horrific act birthed, brought Wallander to the absolute brink. He thinks he can’t take it anymore, so our brilliant detective walks. What a cliffhanger! It would be a worthy season finale, but since there are two more episodes in this season, I can promise you Wallander’s journey back from the brink of this breakdown is riveting viewing. More to come...