This week, the
Christian Fiction Blog Alliance
is introducing
Emily of Deep Valley
Harper Perennial Modern Classics; Reprint edition (October 12, 2010)
with a foreward by
Mitali Perkins
ABOUT THE AUTHOR: 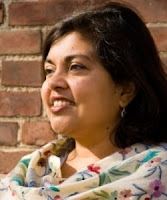 A word from Mitali: Who In The World Is Mitali Perkins?

That's a good question. I've been trying to figure it out myself, spending most of my life crossing borders.

I was born Mitali Bose in Kolkata (Calcutta), India, and always tried to live up to my name—which means “friendly” in the Bangla language. I had to! Because my family moved so much, it was the only way I could make new friends.

By the time I was 11, I'd lived in Ghana, Cameroon, London, New York and Mexico before settling in California just in time for middle school. Yep, I was the new kid again, in seventh grade, the year everybody barely makes it through.

My biggest lifeline during those early years was story. Books were my rock, my stability, my safe place as I navigated the border between California suburbia and the Bengali culture of my traditional home.

After studying political science at Stanford and public policy at U.C. Berkeley, I taught in middle school, high school and college. When I began to write fiction, my protagonists were often—not surprisingly—strong female characters trying to bridge different cultures. 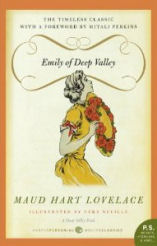 Often cited as Maud Hart Lovelace’s (of Betsy-Tacy fame) best novel, Emily of Deep Valley is now back in print, with a new foreword by acclaimed young adult author Mitali Perkins and new archival material about the characters’ real lives.

Emily Webster, an orphan living with her grandfather, is not like the other girls her age in Deep Valley, Minnesota. The gulf between Emily and her classmates widens even more when they graduate from Deep Valley High School in 1912. Emily longs to go off to college with everyone else, but she can’t leave her grandfather. Emily resigns herself to facing a “lost winter,” but soon decides to stop feeling sorry for herself. And with a new program of study, a growing interest in the Syrian community, and a handsome new teacher at the high school to fill her days, Emily gains more than she ever dreamed...

If you would like to browse inside Emily of Deep Valley, go HERE.
Posted by Unknown at 12:55 PM