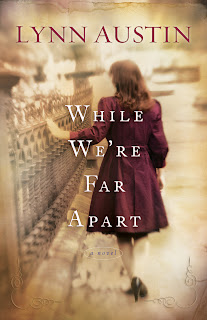 In an unassuming apartment building in Brooklyn, New York, three lives intersect as the reality of war invades each aspect of their lives. Young Esther is heartbroken when her father decides to enlist in the army shortly after the death of her mother. Penny Goodrich has been in love with Eddie Shaffer for as long as she can remember; now that Eddie's wife is dead, Penny feels she has been given a second chance and offers to care for his children in the hope that he will finally notice her and marry her after the war. And elderly Mr. Mendel, the landlord, waits for the war to end to hear what has happened to his son trapped in war-torn Hungary.

But during the long, endless wait for victory overseas, life on the home front will go from bad to worse. Yet these characters will find themselves growing and changing in ways they never expected--and ultimately discovering truths about God's love... even when He is silent.

All Penny Goodrich has ever wanted is to be loved by handsome Eddie Schaffer, the boy next door. But the grieving widower has never paid her anything but neighborly attention, so when he enlists in the army in 1943, Penny impulsively volunteers to care for his two children, with no idea of the difficulties she'll face. Eddie's children, especially the oldest, Esther, want nothing to do with their temporary guardian. All the almost-a-teenager Esther dreams of is having her father back and wishing her mother had never died in a tragic accident, forcing her to depend on Penny's awkward but well-meaning care. Jacob Mendel, the Schaffers' Jewish landlord, wants nothing to do with his tenants - ever since his wife perished in the same accident that claimed the Schaffer children's mother, he's consumed with bitterness towards his God and the search for information about his only son, lost in war-torn Europe. In a time of overwhelming uncertainty, when all seems overwhelming, these very different lives converge in a Brooklyn apartment building. Facing their fears, prejudices, and anger, Penny, Jacob, and Esther find their lives bound together in ways neither of them could have ever imagined - their new-found friendships forged in the fires of a war-torn world a gift of hope to them all.

Lynn Austin proves once again why she's one of my all-time favorite historical fiction authors with her latest offering (it's just an added bonus that it happens to be set in my favorite time period, World War II). While We're Far Apart is at once both epic and intimate, dancing the line between the scope of the war's far-reaching conflict while bringing to life the personal struggles of those left to wonder, hope, and survive on the homefront. This is a rich, meaty historical that brings 1940s Brooklyn to vivid life. Having briefly visited Brooklyn during my one trip to New York City, I felt even more like I could really appreciate Austin's world-crafting having walked in that neighborhood. From the street sights and smells to the clothing, living conditions, and mannerisms, Austin fully immerses the reader in Penny, Esther, and Jacob's world with her carefully crafted prose and eye for authenticity. Like a newsreel  unfurling, she spares no detail in bringing their world to life.

One of the things I loved best about this novel is the way Austin explores both the Christian and Jewish faiths. Like the Biblical story of Esther that comes to figure prominently in the story, God often seems silent to the main characters. How can a good God allow such evil and pain to exist in the world? But again, like the Biblical Esther experienced, God may be silent but He's ever present, always working on behalf of His children, sometimes in the most surprising of ways. Having lost his wife, Jacob struggles to cope in a world that seems to demand more and more from him, more than he feels capable of giving. Jacob abandoned his faith after his wife's death, and inundated with reports of atrocities being committed against the Jewish people in Europe, he despairs of ever being reunited with his only son and his family, living in Hungary. His growing friendship with the hurting Schaffer children bring him back to life, and while they strive to understand why their father must be in harm's way, he works with relief agencies, hoping against hope that these efforts to save Jewish lives will not be in vain. Austin intersperses letters from Jacob's son and daughter-in-law throughout the novel, and they bring to life a heart-rending eye witness account of surviving the Nazi horrors and, against all reason, clinging to faith. Whether it's in the lives of her Jewish or Christian characters, when everything is stripped away and all hope seems lost, God remains, and the way Austin reveals His presence in their lives is a beautiful thing to behold.

This novel is a bit of a slow-burn - while I enjoyed the entire experience, I don't feel like I really got into it until about a third of the way through. This is a "dense" book, packed with historical detail and carefully crafted characters. As I read the book, before I knew it I was in love with them and invested in their lives. While We're Far Apart is historical fiction at its finest, transporting the reader to the war-torn 1940s and peopled with real, authentic characters you can't help but care about. The way this story unfolds is a delight - never following an expected path, Austin layers this story with unexpected connections and surprising plot twists, including a dash of romance that is one of the most heart-warming and satisfying that I've ever read. This is a story that will stay with you long after the final pages. With characters that get under your skin, raw, honest emotion, and thought-provoking explorations of faith, While We're Far Apart is a novel to savor.
Posted by Unknown at 9:43 AM

ooh, if you have a copy of this, you should send it to me... and I could mail it back when I'm done.

Oh, I want to read this book! :) Nice review; you just added fuel to the fire!

I'm glad I'm not the only one putting up a Christmas tree before Thanksgiving! :)

Oh, that's fine. Your package should be arriving any time! The girl who won the wallet lives in the same state as you, and she already received her package. I would love to know when you get it, though. It always makes me nervous when I have a package out until I know it arrived safely. :)

I'm so excited about Harry Potter! My family is also hoping to go to an afternoon showing to avoid the crowds and to get matinee pricing. But our theater only has three showings listed so far...we have to wait until Tuesday for them to put up the whole schedule. I'm hoping that I'll be able to finish rereading the book before Friday.

@Jennifer - Thank you! Hope you enjoy the book as well!

@Kristin - Normally I put up my tree the weekend before Thanksgiving, but I've seen so much chatter on Facebook where friends already have their decorations up that I'm feeling behind. :)

And I will definitely let you know when your package arrives! Maybe the mail will be kind today. :)

And good for you, re-reading the book before the film! I'm so behind there's no hope I'd get a re-read in, LOL!