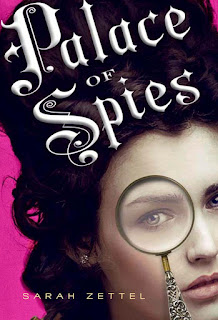 Margaret "Peggy" Preston Fitzroy had few friends and few prospects. Following her father's disappearance and her mother's subsequent death, at the tender age of eight Peggy was left saddled with the burden of her dubious parental antecedents. Sent to live off the largesse of aunt and uncle, she serves as a companion to their only daughter, Olivia. While she and Olivia become fast friends, now sixteen Peggy is ever more increasingly aware of her tenuous status in her uncle's household. When he arranges a wholly unsuitable engagement solely for the purpose of ridding himself of an unwanted familial expenditure, Peggy's refusal to comply sees her cast on the streets with little more than the clothes on her back.

Her only hope is to pursue the acquaintance of Mr. Tinderflint, a gentleman who claimed to have been her mother's friend and expressed a keen interest in doing the daughter a good turn, should her fortune and interest desire. Through Tinderflint and his asssociates Mr. Peele and Mrs. Abbott, Peggy becomes a reluctant player in an intrigue reaching the crown itself. The unlikely trio train Peggy to infiltrate the court of George I by assuming the identity of the recently -- and secretly -- deceased Lady Francesca Wallingham. Assuming that lady's position as maid of honor to Caroline, Princess of Wales, Peggy would then be ideally placed to pass intelligence on the doings and intrigues of the court to her trio of spymasters.

With no other option, Peggy accepts, embarking on the most dangerous game of her young life -- and quickly learning that everything she was taught about her predecessor was a life. In a court riddled with Jacobite spies, where lord and lady alike jockey for position and favor, one misstep in this intrigue could cost Peggy her life. But in this great game of kings and pretenders, the most important player of all may turn out to be a masquerading maid.

Thanks to its youthful protagonist and candy-colored cover, Palace of Spies is positioned and marketed as a young adult novel, but like the best stories it transcends categorization -- this is a frothy spy caper, yes, but solidly grounded in its historical context. Those who look to the television show Reign and its ilk would do better to look within these pages for their historical drama fix. For while Zettel brings the 18th century royal English court to life with enough beautiful, bright young things and romantic intrigue to satisfy the most die-hard historical soap opera aficiando, hers are not merely modern characters dressed in period costume. Peggy is quite intelligent and forward-thinking, but Zettel is careful to make her very much a girl of her time, well aware of the social expectations vis-a-vis women in the world in which she lived.

Zettel peppers the narrative with facts on dress, make-up, hair, and court customs and procedure, grounding the incredible adventure Peggy finds herself involved in historical fact and realities. For those who cut their teeth on stories of aristocratic intrigue as I did, such as The Scarlet Pimpernel or The Man in the Iron Mask, there is much to love in watching Peggy's dangerous chess mach of political intrigue unfold. Except here, unlike most classic tales featuring male protagonists, a heroine is center stage, arguably ill-equipped but a determined survivor, her greatest assets her quick wit and keen intelligence.

Peggy is the type of heroine I absolutely adore -- smart, resourceful, and compassionate. Part Nancy Drew, part Peggy Carter, with a dash of an Austen heroine's sensibilities, Peggy's first adventure in George I's court is perfect gateway historical fiction. Palace of Spies has all the energy and rapid pacing of modern filmmaking, grounded in history and character development sure to leave readers craving more. There's the promise of romance with Matthew Reade, the handsome artist's apprentice, a blossoming relationship rife with swoon-worthy sparks, but more importantly built on a foundation of friendship and mutual regard. Between Matthew and her cousin, Peggy has formed an unlikely team with which to tackle the mightiest political forces of her day -- a team I can't wait to see in action in future installments! Palace of Spies is a breezy, fast-paced read set in a time period too little explored in historical fiction, laced with intrigue and historical flavor, a welcome addition to YA lit and above all, a rollicking fun read.

A warning to all young ladies of delicate breeding who wish to embark upon lives of adventure: Don't.
Sixteen-year-old Peggy is a well-bred orphan who is coerced into posing as a lady in waiting at the palace of King George I. Life is grand, until Peggy starts to suspect that the girl she's impersonating might have been murdered. Unless Peggy can discover the truth, she might be doomed to the same terrible fate. But in a court of shadows and intrigue, anyone could be a spy—perhaps even the handsome young artist with whom Peggy is falling in love . . .
History and mystery spark in this effervescent series debut.
Posted by Unknown at 9:13 AM

*Whew* Finally getting over here to read this review. As usual, wonderful review, Ruth. This book sounds amazing. I've been eyeing the series for a while (partly due to those bright covers), but haven't picked book one up. This has convinced me: I must do so. :)