this is really happening... 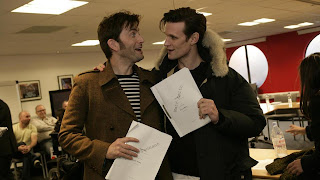 *dies of happiness*
Posted by Unknown at 1:29 PM

Very cool! :) I can't wait to see what kind of awesomeness they come up with for that special.

I knew this would have to happen but it's good to see it's finally confirmed!

@Lori - I know, right? I would've been CRUSHED if they didn't bring Tennant back!

This is the best news! Now, if Christopher Eccleston is in it too, I will be ecstatic!

SQUEEEEEE!!!! I'm SO pumped about this, it isn't funny.

GAHICAN'TWAIT!!!!! Now as long as Moffat doesn't do anything stupid with our Ten and Rose...there must be a happy ending this time. :)

@Karrie - Ohmygosh...that would be a tremendous surprise!

Hey, Ruth! You've probably seen these but I thought you may appreciate them:

@Rissi - Oh I have but it has been a while! Thanks for the reminder. :)