Review: The Heiress of Winterwood by Sarah E. Ladd 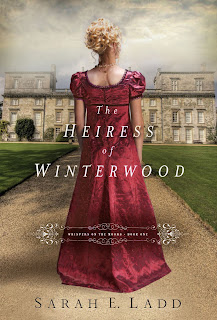 Amelia Barrett, orphaned and raised by her uncle's family, stands on the cusp of inheriting Winterwood Manor its assets -- but only if she marries by her twenty-fourth birthday, a deadline approaching in just two months' time. While her family has encouraged her engagement to Edward Littleton, soon to be her uncle's business partner, Amelia resists. She dreams of a life where she controls her future, free to care for Lucy, the orphaned babe left in her care at the passing of the child's mother, her friend Katherine. When Lucy's father, naval Captain Graham Sterling, arrives on shore leave, his plans are straightforward -- arrange for his daughter's care and return to his war-bound ship and crew. But Graham didn't count on Amelia's determination to remain a part of Lucy's life, her resolve to save his daughter from the motherless childhood she herself endured. Amelia's proposal is audacious -- she proposes a marriage of convenience to Graham, thereby guaranteeing Lucy's care and future and granting Amelia the control of her birthright. Reluctant to tie himself anew to the responsibility of a family, Graham accepts Amelia's offer, and the pair's unorthodox alliance unleashes a wave of fury that threatens to engulf all they hold dear. It's a risk Amelia is willing to endure for Lucy's sake, but when the one she values most becomes a pawn in a dangerous revenge scheme, Amelia and Graham must join forces to protect a future suddenly more precious to both of them than either had ever dreamed.

Winner of the 2011 Genesis Award for historical romance, Sarah Ladd's debut is an assured, polished offering that lives up to its pedigree -- easily one of the better debuts I've read in years. The Heiress of Winterwood introduces a fresh new voice in Regency-era fiction sure to please fans of classic romances, marrying the drawing room sensibilities of Jane Austen with a healthy dash of gothic suspense in the tradition of the Brontes. I loved the female initiative shown through Amelia's proposal in this twist on the marriage of convenience trope -- a lady such as she, gently bred, would be the last one you'd expect to be so forward. But with a passionate dedication to keep her promise to Lucy's mother, and a deeply compassionate, generous heart, Amelia is my favorite kind of period drama heroine -- one who isn't afraid to be thought of as a bit eccentric, if you will. :) Likewise Graham is hero sure to find a place in the heart of anyone who has ever loved fellows named Darcy or Wentworth -- principled, honorable, and determined to never repeat the mistakes of his past, Ladd handles Graham's slow-burning interest in Amelia and her unorthodox offer with a deft hand and a refreshing believability. A second son and a man of war, Graham is naturally reluctant to take on the responsibility of a new bride when his own future is so uncertain, which opens the door for a very organic exploration of faith and trust issues.

Despite Amelia's boldness in proposing marriage to a man she's only just met, she and the other characters who inhabit her world are very much of products of the Regency time period in which they lived. Ladd has an excellent eye for period detail and mannerisms that flesh out the world of Winterwood Manor, from carefully-planted details describing Amelia's clothing and pastimes to the attitudes she encounters when her plans vis-a-vis Graham and Lucy become known, including her own passing concern with maintaining some semblance of a proper lady's reputation. That said, I hope that in forthcoming volumes Ladd balances correct speech with readability -- the dialogue is articulate and proper, but at times so concerned with maintaining a period-appropriate level of formality that readability is sacrificed, slowing the forward momentum of the plot.

While summaries of this novel focus on the danger surrounding Lucy's disappearance, nearly two-thirds of the novel pass before this pivotal plot point occurs, and as a result the novel's overall pacing is a uneven. Ladd has an undeniable talent for world-building, transporting her readers to 1814 England with her well-researched, articulate prose. And the first two-thirds of the novel, introducing Amelia and Graham, is a study in slow-burning romance and reluctantly-realized attraction. There's a gradually increasing sense of the menace facing Amelia and Lucy throughout sixty percent or so of the novel -- nicely reminiscent of Bronte with its gothic overtones and imperiled heroine, or later masters of similarly suspenseful fiction (i.e., Victoria Holt or Georgette Heyer -- as regards the latter, The Talisman Ring comes particularly to mind). However, this careful groundwork means the first portion of the novel is occasionally sluggish pacing-wise, especially when compared to the stellar final third act that sees Ladd unleash her full potential as an author. The romance, action, and pacing of Winterwood's conclusion will leave you eager with anticipation for a sequel -- this is the rare story that fully delivers on its promise of introducing a new voice to watch in historical romance.

The Heiress of Winterwood is a richly atmospheric, memorable debut marking Sarah Ladd as an author to watch. Sure to appeal to fans of Austen and Heyer's regency romances, Ladd deftly marries the manners and sensibilities of the Regency period with a touch of the peril, suspense, and lush romance that characterized later gothic romances from the likes of the Brontes, woven together with a subtly-drawn thread of faith. It's a heady combination, at once both wholly true to the time period in which the story is set, while simultaneously setting Amelia and Graham's story apart from other historical fiction that share this time period. If subsequent Ladd novels possess the charm and romance of Winterwood with slightly more polished dialogue and even pacing,  I cannot wait to see where this author takes readers next after delivering simply one of the best inspirational debuts in my recent memory. With a poise and polish that belies Ladd's stance as a debut author, The Heiress of Winterwood is replete with all of the romance and intrigue that its lovely cover implies -- a richly satisfying debut whose promise and potential leave me eager for the sequel -- very well done.

Amelia Barrett gave her word. Keeping it could cost her everything.

Amelia Barrett, heiress to an estate nestled in the English moors, defies family expectations and promises to raise her dying friend's baby. She'll risk everything to keep her word -- even to the point of proposing to the child's father -- a sea captain she's never met.

When the child vanishes with little more than an ominous ransom note hinting at her whereabouts, Amelia and Graham are driven to test their boundaries of love for this little one.

Amelia's detailed plans would normally see her through any trial, but now, desperate and shaken, she's forced to examine her soul and face her one weakness: pride.

Graham's strength and self-control have served him well and earned him much respect, but chasing perfection has kept him a prisoner of his own discipline. And away from the family he has sworn to love and protect.

Both must learn to have faith and relinquish control so they can embrace the future ahead of them.

*Thanks to Litfuse for the review opportunity, and my apologies to both Litfuse and the author for the delay in completing this post. Click here to see what others are saying about Ladd's debut.
Posted by Unknown at 9:35 AM

Thanks for the review- this sounds really good! And as I mentioned before, the cover is so gorgeous. I might just have to pick it up tomorrow. :)

ooh--I'm reading this one at the moment! Anymore, for me to actually read a book cover-to-cover, it has to be good quality; this one has kept me hooked. The Regency period is a difficult one to master, too, but Ladd did it gracefully! And I agree; fans of Wentworth and Darcy will fall for Graham Sterling in a heartbeat :)
Stellar review!

I worked on this one and I finally finished reading my copy last week. I was going to ask you if you wanted to borrow it but you beat me to it ;-)

I agree with your review and I look forward to Ladd's future books.

@Kristin - Oh, I think you'll like it! (Would you be picking this up along with Michael Buble's new album tomorrow? Had to ask.) ;)

@Lori - LOL! Great minds - if I'd missed the tour I definitely would've been taking you up on this one. (Also, great job on the layout!)

Ha. Good question! :) I've been trying to convince myself that I need to listen to previews of all of the songs online first, though I know I'll end up buying the CD eventually. But I might not be able to resist! I'm a bit short on cash this week, though, so it'll probably have to be this book *or* the Michael Buble CD. :)

@Kristin - I hear ya...gotta spread out the purchases! I'm sure you knew this already, but just to make sure -- Target is carrying an exclusive version of Buble's new CD w/ 3 bonus tracks. :) And if you opt for the book, all I can say is ENJOY. :)

Thanks! The editor said the author loved it too so that was nice to hear.

@Lori - That's awesome, and very well-deserved IMO! It is a gorgeous book! :)

Oh my goodness, thank you so much for your lovely, thoughtful review! And thank you for taking the time to share your thoughts and insights ... I am so glad you enjoyed it. :)

@Sarah - Oh you are more than welcome! :) I'm so happy to have been able to participate in this tour, and I can't wait for your next book! :)