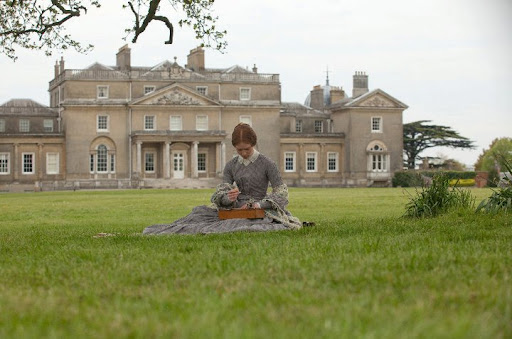 Jane Eyre is happily appearing in more theaters this weekend (you can find a release schedule here). (And yes, I realize it's only Tuesday night. I can't HELP thinking about the weekend already, sorry!) I wanted to take an opportunity to share reviews from a few friends around the blogosphere.

~ Rachel from a Fair Substitute for Heaven describes Rochester:

"Michael Fassbender is cognizant that he is playing into the putty of the Byronic ideal and that this character has been defined, often by playing up its aggressive and violent elements, countless times before. This recognition forces him to play with his eyes. Watch his physiognomy as he livens to Jane’s quick responses and his desperation to penetrate her every thought." (Aside: I love that I have friends that use words like "physiognomy" in their blog posts.)

And concludes that "Jane Eyre hits the right notes, offers something fresh and inventive and exposes the great, mind-blowing romanticism that has kept it at the forefront of the Western Canon since 1847."

"Yes, he is enigmatic and often harsh...but there is a tenderness here that makes him more human than other versions of the character. When Bertha flies at him he restrains her almost compassionately, and it is a testament to Fassbender's acting that he conveys how Rochester despises Bertha and his awful mistake in marrying her but cannot act cruelly towards her." (Really brilliantly played IMO!)

But concludes that "if I hadn't read and enjoyed the book so much, I would have absolutely adored this movie. As such I enjoyed it immensely but felt it couldn't measure up to the powerful and affecting emotion of Bronte's original story." (Yay for Jane Eyre book love!) :)

Describing our new Jane, James feels that "Mia truly inhabits the role, beautifully portraying Jane’s sense of self-respect, integrity, and restraint, as well as her passion and vulnerability. Michael Fassbender was also inspired casting. He embodies Mr. Rochester with the ideal blend of charisma and sinister brooding, while at the same time allowing glimpses of his underlying desperation and the wounded depths of his soul."

~ Author Kaye Dacus (one of the friends I was thrilled to see the film with last weekend) isn't quite a Charlotte Bronte fangirl like me. *wink* She takes note of the film's AMAZING costumes, and wishes the film had been able to spend a little more time on the development of Jane and Rochester's relationship. (I've mentioned this before but it bears repeating...what I wouldn't give to see a four-hour version of Jane Eyre with Michael Fassbender as Rochester. *swoon*)

Please visit the above links to check out the full (and well-worth reading) reviews.

And now, for some gratuitous Michael Fassbender quotes:

At Word and Film, Fassbender gives perhaps one of my favorite interview quotes when talking about his take on Rochester:

“What I liked about Rochester in particular is that he’s not a good guy or a bad guy; there’s ambiguity there,” says Fassbender. “I realized I was taking on the Byronic hero. And once I locked onto that, I had everything I needed for the role. There’s intelligence, there’s self-destructiveness, there’s this idea of a shady past. There’s a flawed personality. There’s someone who doesn’t like the conforms of society. There’s a rebel, really.”

The man is BRILLIANT.

My second favorite Fassbender moment comes courtesy of an interview with Salon.com, where he admits that Toby Stephens' take on Rochester is his favorite.

The man is BRILLIANT and clearly has good taste. 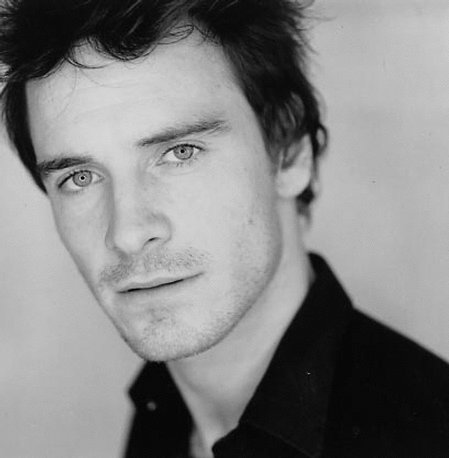 *sigh* That's better. :) And you're welcome. I know you wanted a Fassbender pic in this post too. :)

If you know of any reviews out there in the readership that I may have missed, please leave a link in the comments!

Lol, did you hear that? Pardon my wailing. My city STILL isn't on the release list! Come on, Tulsa....I may have to pack a covered wagon and head down to OKC ;)
I'm anxious to see this knowing that is put out by the same people who had a hand in the recent Pride and Prejudice. I love that movie SO. Aside from the story, its a visual feast. I love to just have it on in the background when I paint. I anticipate this new Jane to be much the same :)
Thanks for the reviews!~

Thanks for the linkage, babe!

And Michael *really* favors Aidan Quinn in that B&W picture!

The closest city to me that it's been released in is about 2 hours away...I'm anxiously awaiting a wide release! :)

@Heather - LOL, yep, heard you loud and clear...sorry for the torture. ;) I love finding out that P&P '05 serves as a background to your painting...I suspect Jane could be equally inspiring. :)

Thank you for placing the pic of Michael Fassbender at the BOTTOM of the post, otherwise I would have been too distracted to read what others were saying about the film. :-P

Ruth, it would be interesting indeed to see Michael and Mia in the 2006 version (my favorite).

I came over to your blog from your comment on Vic's and my review at Jane Austen Today. http://janitesonthejames.blogspot.com/2011/04/jane-eyre-2011-review-by-two.html

I look forward to enoying more of your reviews!

Ahh so honored to be linked on here :) loved reading your take on the movie! Fassbender is so dreamy...

@Jean - Thank you so much for stopping by my blog! I appreciate the visit! :)

@Roving Reader - You are welcome! :) And welcome back to the blogging world! FASSBENDER!!! *swoon* :)