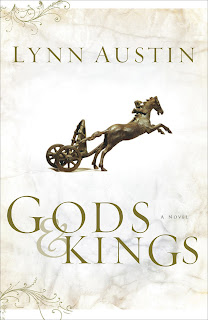 He was born to rule the people of God…but Yahweh is only a vague, powerless memory in the minds of His people.

Though born the second son of King Ahaz, Hezekiah is not protected from his father’s perverted attempts to gain the favor of the idol Molech. Terrified and powerless at the foot of Molech’s altar, Hezekiah encounters for the first time the one true God of his royal ancestry, Yahweh.

But his journey to the Holy One is riddled by influence from an assortment of men: Zechariah, a grandfather of noble standing who has fallen into drunkenness; Uriah, the High Priest whose lust for power forces him to gamble the faith he proclaims; and Shebna, the Egyptian intellectual who guides Hezekiah’s instruction.

For the two women who love Hezekiah, the meaning of love – and it’s sacrificial essence – will direct the course of their lives and help shape the young prince’s future.

Hezekiah, prince of Judah, lives in a kingdom under siege from hostile forces within and without. His father, King Ahaz, has abandoned the worship of Yahweh and led his nation into idolatry. Gods & Kings chronicles Hezekiah's coming of age, detailing his turbulent childhood when he saw his father sacrifice his older brother Eliab to the pagan god Molech. Overwhelmed by fear, Hezekiah first encounters the life-changing touch of God through the love and teaching of his grandfather, Zechariah, a Levitical priest. These seeds of faith are all that Hezekiah has to guide him in a kingdom threatened by invasion and corrupted by idolatry. But surrounded by threats to his very existance, can he hope to survive and be given the chance to change the future of his country?

This is one of the best biblical fiction series out there, easily on par with Angela Hunt's Legacies of the Ancient River series. I don't feel that Austin's writing is as strong or her characters quite as well-developed as is evident in her later books (such as the Christy award-winning novels Candle in the Darkness and Fire By Night), but that's a very minor issue. Austin does an excellent job bringing the world of ancient Judah to life in all of its color, pageantry, danger, and intrigue. She breathes fresh life into the character of Hezekiah, creating a flesh-and-blood man whose struggles and weaknesses make his triumphs as one of Judah's greatest kings all the more inspiring. And the book lives up to perhaps the best measure of whether or not biblical fiction succeeds or fails - it inspires study of the actual biblical text.

When reading this book (incidentally this was my second time), I was struck by how timely the story felt. Hezekiah was one small drop in an overwhelming sea of danger and false gods, but God used his life to literally change the course of an entire nation and people. So read, study, and be inspired as Austin helps to bring to life the truth of 2 Chronicles 7:14 -- "if my people, who are called by my name, will humble themselves and pray and seek my face and turn from their wicked ways, then will I hear from heaven and will forgive their sin and will heal their land."

I am doing a ton of reading this week, which is taking temporary precendence over blogging...so that means it's time to pull another review from the ol' archives! :) I wrote this review of Gods & Kings back in 2006, and since then it's proven to be one of my most "helpful" reviews on Amazon, interestingly enough.

In re-reading this review, I'm struck by the fact that I've gotten a heck of a lot wordier in the last six years. So tell me, people, is that necessarily a bad thing? LOL...maybe I don't want to know! *wink*
Posted by Unknown at 11:59 AM

Never a wasted word with you, dear Ruth:) Truly. I've not read this one but would like to. Great review! I was reminded of what Publishers Weekly said about her not long ago - "Austin can't seem to write a bad book." Guess this is another stellar one for Lynn:)

@Laura - Oh my friend, that means SO much coming from a stellar wordsmith like yourself! :) Thanks for dropping by!

Wordier is not a bad thing at all. :) Always love reading your reviews. I loved this book back when I read it. Thinking a re-read might be in order.

@Michelle - Aww, thanks Michelle. :) The feedback means a lot! Hope you get the chance to re-visit this one sometime soon!

I have this book somewhere and never read it! After your review, I thought, "Shame on me!"