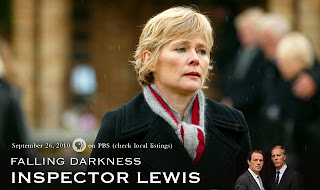 Inspector Lewis ended its third season run on Masterpiece Mystery with a thoroughly enjoyable episode entitled Falling Darkness. In fact, it may well be my favorite episode of the season. Here’s the episode summary from the PBS website:


It's Halloween in Oxford, and mischief is in the air — and, as it happens, murder. A woman is found dead, a stake through her heart, a bulb of garlic in her mouth. It's a surreal crime, and an intensely personal one for Dr. Laura Hobson. The victim is Ligeia Willard, one of Hobson's old college housemates. It seems to be a terrible coincidence, one that has left Hobson disoriented with grief. When another murder takes place in a house where Hobson once lived, Detective Inspector Lewis (Kevin Whately) and Detective Sergeant Hathaway (Laurence Fox) must confront horrifying possibilities — Is Hobson connected to the crime? Could she be a killer? It's a case that will conjure ghosts from the past and may well deliver the fatal blow to the team of Lewis, Hathaway and Hobson.

While I’m ultimately cheering for a Lewis and Dr. Hobson (Clare Holman) romance – they are a sweet couple with all their emotional baggage, aren’t they? – I felt the show had taken too great a leap forward with last week’s episode, Your Sudden Death Question. With a reticent, emotionally withdrawn character like Lewis, to go from the barest glimmer of interest in a woman to planning weekend trips seemed like too great a leap given how we’ve seen his character act in the past. In Falling Darkness, I feel like a much-needed correction, a reset, happened in the Lewis-Hobson relationship, and I loved the layers it gave these beloved characters.

A Laura-centric episode was long overdue, and frankly I never dreamed the quiet and rather demure Dr. Hobson ever possessed such a colorful past. This show is fond of proving the old maxim still waters run deep. This storyline may take the record for the sheer number of convoluted twists and turns that are a trademark of the program. When Laura was in college, she had four housemates – when one of them turns up dead, a stake through her heart and a bulb of garlic in her mouth (surreally appropriate for the Halloween timeframe), and a current student living at their old house is also murdered, the unthinkable happens. The always dependable and professional Dr. Hobson finds herself at the center of two murder investigations. Lewis and Hathaway find themselves in a race against time to discover who is digging into Laura’s past, and why – and more importantly, is it even remotely possible that Laura is somehow complicit in the crimes?

I loved the Lewis-Hobson dynamic in this episode. As I mentioned earlier, it was a much needed step back for the pair relationship-wise, so when Laura comes under suspicion you can see Lewis really struggle with his emotions. Could he have misread Laura that badly? The way both of them struggle to balance their personal and professional lives, and the harsh requirements that come with their jobs, was brilliantly played by both Whately and Holman. And I can’t lie, I loved Lewis’s barely suppressed jealousy of Laura’s relationship with Alec (Rupert Graves), one of her former housemates. That was fun to watch. Masterpiece fans will be seeing a lot more of Graves in the coming weeks as he makes an appearance in Wallander series 2 and plays Lestrade in Sherlock.


The genetic disorder FFI (Fatal Familial Insomnia) plays a crucial role in how this storyline plays out. This was probably the most fascinating part of the story for me, since just a few weeks ago I read an article in National Geographic on sleep that mentioned this terrible disorder. Prior to that article (which you can read here), I’d never heard of FFI, so to have it make a prominent appearance in one of my favorite mystery shows was kind of weird! Anyway, my understanding of FFI is based solely on the NG article, and from that reading I have to say the script of this episode took some liberties with the actual symptoms of this disease. First of all, it seems FFI strikes people in middle age, not their 20s, and it results in death in a few months to a year. While it’s not a stretch to think that would drive a victim insane, I think it’s not out of line to conclude that the filmmakers took some artistic license in how they portrayed this disease playing out on-screen. But it worked in service to the story - it was creepy, intense, and a tad over-the-top - basically everything I want in a Lewis episode.
This episode encapsulates everything I love about this series. The mystery is well-written, unexpected, and possesses the requisite creepy moments needed to keep me hooked, it twists and turns and throws out red herrings so fast I get whiplash, and there are plenty of humorous and gently sarcastic moments between Lewis and Hathaway. At this point I can say that for me, this partnership has proven it will never get old, I hope the show continues forever. If you've never watched this series, Falling Darkness is in my view one of the strongest episodes to date. Not a bad place to start if you're interested in giving the show a test run. :) Hopefully I've shared just enough to whet your appetite about the program - this mystery was too good, which is why I'm (trying) to hold back too many spoilers.
Oh, I can’t forget to mention the most surprising bit of casting in this episode – Lucy Griffiths, a.k.a. Marian, played Madeleine, one of the students currently living in Laura’s old college home. I almost didn’t recognize Griffiths since for this role, she traded in her dark hair for a bleached blonde and wore goth-style clothes and makeup. Though her role was relatively minor, it was good to see her again on-screen. Hopefully more, and meatier, roles will come her way in the future.

While I'm sorry to say goodbye to Lewis and Hathaway for now, I am looking forward to Wallander series 2 and most of all, Sherlock!
Posted by Unknown at 2:55 PM

I was disappointed that Laura didn't solve the mystery. Honestly, as soon as someone was murdered in her old flat, she should have been like, "HM THAT'S STRANGE" and started investigating. Or that's what I would have thought. I'm also a little annoyed that she had to be save by Lewis at end. She didn't even struggle against those two! When he was shoveling dirt on top of her, I was like, "Sit up, you idiot!"

So, yeah. Mainly annoyed. If she's not going to kill someone, the least she can do is solve the murder OR save herself.

But it worked in service to the story - it was creepy, intense, and a tad over-the-top - basically everything I want in a Lewis episode.

*sigh* The season is over. Now we must wait until the new ITV episodes of Lewis air next Spring. ;-)

Not sure a romance with Lewis and Hobson is a good idea in the long run. They will just have to kill her off, and I like Laura. Oh please ITV/PBS don't give Hathaway a committed relationship. It would take away all the suspence and just give us too much info about him. The enigma would be gone.

Thanks for the thoughtful review Ruth. I can always depend on you to fill in the gaps for me.

@heidenkind - You bring up a really interesting point about Laura's involvement in the story, and honestly I hadn't even gone there. But making Laura more pro-active in the case would've been a welcome addition to the episode, especially since she showed some investigative spunk earlier in the season in the Dark Matter ep.

@Laurel Ann - I'm so happy this series is continuing. I think I could definitely handle a Lewis/Laura romance better than a Hathaway one. There's still so much we don't know about him, and he's one character where I really enjoy the slow reveal that the show does so well. However, it could be interesting to see Hathaway develop interest in someone, only to have her die by the end of the ep (goodness I can't believe I'm in favor of such emotional torture for one of my favorite characters!). But I think something like that could reveal some interesting aspects to Hathaway's personality.

This (along with Your Sudden Death Question) is one of my least favorite episodes of Lewis. It was weird and hard to follow, *cough*notenoughHathaway*cough*, and the incest part was just ick. On the other hand, it had Rupert Graves in it and oh man he is just EVERYwhere - he was on some other show my PBS affiliate showed the same night, and he was in The Tenant of Wildfell Hall, and holy he is in the new Sherlock Holmes (a.k.a. my new crack). Which I don't mind at all as he is rather nice to look at.

I don't know how I feel about Lewis and Hobson getting together. I never watched 'Inspector Morse' so I never "met" his now dead wife.

@Joni - Thanks for commenting! It's always great to meet another Lewis (and Hathaway - haha!!) fan!

It's been a while since I've watched this episode, so I don't know if my opinion of it has changed since I wrote this blog post. ;) I think I've seen a sum total of maybe, MAYBE two Morse episodes and that's it - so I never saw Lewis in his pre-grieving state. While I like the idea of him & Hobson together ultimately, I felt like the series pushed them together a bit too fast last year - I'm hoping this year's episodes dial back on that a bit.

I LUV ME SOME RUPERT GRAVES! You are right, he is EVERYWHERE now. And I ADORE the new Sherlock - the new episodes can't come soon enough to suit me!

I just discovered Inspector Lewis (via Hulu) and discovered your beautifully written blog while googling FFI. I adore Inspector Lewis, but I hope the series never begins to focus on the personal lives of the main characters. It seems to be a handy turn when series' writers run out of good ideas. Anyway, I'm delighted to have found your blog. It's a real pleasure to read.

@Joan Taber - Welcome to the Inspector Lewis fan club! And thank you for your kind comment!! :) I think the show keeps it pretty light when delving into the main characters' personal lives...I suppose it is to keep people like me mad with the tantalizing glimpses of backstory and downtime! :) Have you been able to catch up with this year's slate of episodes?

I recognized Lucy Griffiths right away and loved her vamp style for this Halloween episode. What I've been looking for, is a white dress like the one she wore in the morning - when she found her house mate dead on the floor. Anyone have any ideas where to look?

@Katie - I wish I could help you out, but I'm afraid I have no clue! Good luck in your search!