The Bletchley Circle - coming in April! 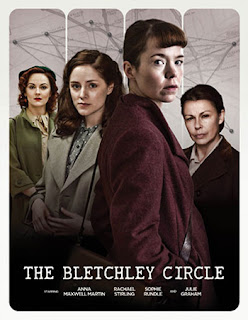 I stumbled across some exciting news this morning via Facebook -- PBS is bringing The Bletchley Circle to the States, starting on April 21st. With the show's premiere, the PBS Sunday night line-up will consist of Call the Midwife's second season, the premiere run of Mr. Selfridge, and this -- talk about a packed evening. :)

Here's a bit about the show:

THE BLETCHLEY CIRCLE follows Susan, Millie, Lucy and Jean, ordinary women with extraordinary ability to break codes, a skill honed during World War II when they worked undercover at Bletchley Park, site of the United Kingdom’s main decryption establishment. Now, in 1952, the four have returned to civilian life, keeping their intelligence work secret from all, including family and friends. A series of ghastly murders targeting women, however, reunites the team as they set out to decode the pattern behind the crimes.

Two-time BAFTA award-winner Anna Maxwell Martin (“South Riding,” “Bleak House”) stars as Susan, now a housewife with two children, who has collected data on a series of murders and tried, unsuccessfully, to convince the police that another is imminent. Rachael Stirling (“Women in Love,” “Boy Meets Girl”) is Millie, the feistiest of the bunch, conversant in 14 languages, worldly and street smart. RADA graduate Sophie Rundle plays Lucy, a young woman equipped with a photographic memory. Julie Graham (“Lapland,” “Doc Martin”), oldest of the four, is the former head of the Bletchley Park unit.

Email ThisBlogThis!Share to TwitterShare to FacebookShare to Pinterest
Labels: The Bletchley Circle

Thanks, I've had no luck finding out the schedule for the rest of the "Classics" Season on Masterpiece.

Anna Maxwell Martin is amazing. She and David Morrissey were incredible in South Riding.

I like to know what's coming up to fill the big spot at 9pm.

@Debra - After Downton Abbey, it's Mr. Selfridge. Bletchley isn't airing under the "Masterpiece" name, though it might as well considering it is on Sunday nights IMO.

This miniseries is really quite good, Ruth! Hope you enjoy. I only wish that it gets made into more of a series since there's so much more to work with.

@Rissi - Thanks, I think it sounds really interesting. And I've read that there is the possibility of a 2nd series...since PBS has picked this up I'm sure that will help the chances of making that happen!

Oh, good! Mom and I were crossing our fingers that their would be more. Plus Anna is superb. :)

Thanks Ruth for always sharing this great info.

Am sure you've heard, Ruth but... just popping in to share that there is to be a second series of this! Yay! Plus Hattie Morhan is set to join the cast also which should be fun - always excited to welcome new characters. :)

@Rissi - Yep, but thanks for checking! I'm really looking forward to where they take these characters next...and I think Hattie Morahan will be a great addition to the cast!