Within My Heart by Tamera Alexander

by
Tamera Alexander
ABOUT THE AUTHOR: 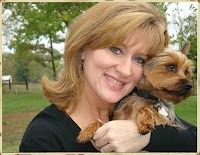 Tamera Alexander is the best-selling author of Rekindled, Revealed and Remembered, the critically acclaimed Fountain Creek Chronicles historical series with Bethany House Publishers. Her second historical series, Timber Ridge Reflections (From a Distance, Beyond This Moment, and Within My Heart), penned in her style with deeply drawn characters, thought-provoking plots, and poignant prose have earned her devoted readers—and multiple industry awards.

These awards include the 2009 and 2008 Christy Award, the 2007 RITA for Best Inspirational Romance, the 2009 and 2007 Gayle Wilson Award of Excellence, 2007 Bookseller’s Best Award, and Library Journal’s Top Christian Fiction for 2006, among others.

After living in Colorado for seventeen years, Tamera has returned to her Southern roots. She and her husband now make their home in Nashville with Tamera's father, Doug. They enjoy life there with Joe and Tamera's two adult children, and Jack, a precious—and precocious—silky terrier.

Widow Rachel Boyd struggles to keep her ranch afloat and provide for her two young sons, though some days it feels as though her efforts are sabotaged at every turn. When her cattle come down with disease and her sons' lives are endangered, she must turn to Rand Brookston, Timber Ridge's physician and reluctant veterinarian. While Rachel appreciates his help, she squelches any feelings she might have for Rand--her own father was a doctor and his patients always took priority over his family. Rachel refuses to repeat the mistakes her mother made. But when she's courted by a wealthy client of the local resort, she faces a choice: self-sufficiency and security or the risk inherent in the deepest of loves.

If you would like to read the first chapter of Within My Heart, go HERE.
Posted by Unknown at 5:38 AM