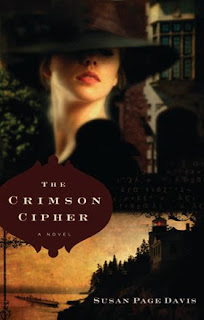 It’s 1915, and Emma Shuster has far too much on her mind to entertain notions of romance…

Saboteurs are doing their best to keep the United States out of the Great War. With enemies lurking at every turn, whom can Emma trust? Is romance the true motive behind her two suitors’ advances? Or could one – or both of them – have traitorous intentions in mind?

When Emma’s code-breaking father is found murdered and his secret encryption project left unfinished, the navy offers Emma a position breaking intercepted ciphers from America’s enemies. Emma races to discover the nefarious plans of her country’s foes and unmask their leader before others are killed. And yet, her greatest challenge may be deciphering the cryptic messages her heart sends her whenever she encounters a certain navy lieutenant…

Emma Shuster’s peaceful, academic world is rocked when she discovers her father, a professor and researcher, has been brutally murdered. His death leaves his most important work unfinished – a new machine designed for the secure encryption of sensitive information. With war raging in Europe, and the United States government skirting a delicate balance of maintaining neutrality while protecting political and economic interests, the need for new methods of encryption and deciphering codes has never been greater. Thanks to her own knowledge of ciphers, Emma is recruited to join the Navy’s Signal Corps and their top-secret group of cryptographers working to stop the sabotage plots of German spies and sympathizers on U.S. soil. Between her work and a blossoming romance with a handsome lieutenant, Emma’s life has taken a turn she never could’ve imagined. When Emma learns that because of her father’s machine she’s being targeted by Kobold, the shadowy leader of the German saboteurs, she doesn’t know who to trust. It’s a race against time to capture the spies and catch her father’s killers before they can eliminate Emma and stop the critical work she’s now a part of in defending the country.

The early day of World War I, especially prior to U.S. involvement in the conflict, is a sadly overlooked time period in the historical fiction market in my experience. Happily, Davis’ The Crimson Cipher illuminates this time period with a tale rich in detail and historical authenticity. The only other story I can think of that deals so intensely with cryptography during this time is The 39 Steps (I love both the Hitchcock and recent Masterpiece Classic versions of the story). While Cipher is less of a rollicking adventure than the film versions of The 39 Steps, what sets it apart is its focus on the ins and outs of cryptography and its applications, and the type of personality and training required to become a successful code breaker. In a day when computer programs can encrypt or decipher information in mere seconds, the discipline and trial-and-error work it took to manually crack codes blew me away. Emma and her real-life counterparts were brilliant and could look at number and letter combinations in ways I have a hard time fathoming, and I loved reading all of the detail concerning their work that Davis peppers throughout the text.

I have to applaud Davis for crafting a novel with a strong female heroine like Emma in an extremely unusual profession to boot during a time when women couldn’t yet vote, and if they worked it was often as secretaries or the like, not in male-dominated fields. Emma is extraordinarily smart, but Davis is careful that quality doesn’t translate into a modern, pushier personality – her character feels wholly true to the early twentieth-century’s customs and manners, without seeming forward or out of place. I was occasionally frustrated with Emma though, because I feel like her emotional reaction to her father’s murder is really glossed over and its impact on her decisions given the short shrift. And while I loved John’s character – he very much embodies the dashing, gentlemanly quality I have always imagined a spy must’ve possessed during this time period (I blame old movies, LOL!) – the romantic in me wishes there’d been a little more focus on the romance aspect of the novel, since John is such a sweetheart . But solid research and an engaging storyline, a unique heroine, and a fascinating premise make The Crimson Cipher a thoroughly enjoyable read. Given her in-depth research and affinity for the time period, I hope that Susan Page Davis chooses to revisit this time period – she clearly has a knack for penning a thought-provoking spy tale.
Posted by Unknown at 10:08 AM

Beautiful review. You have me ready to read it.

Hi... Looking ways to market your blog? try this: http://bit.ly/instantvisitors

@Juju - Thanks! Hope you do get the chance to read it some day!