Review: Theodosia and the Serpents of Chaos by R. L. LaFevers 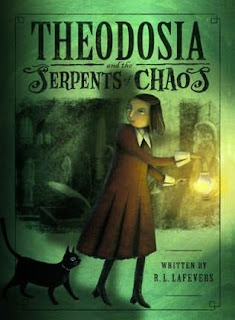 “Frankly, I’m not fond of surprises, as the ones around here tend to be rather wicked.”

For poor Theodosia, however, surprises abound. She spends most of her time at the Museum of Legends and Antiquities in London. There, all the artifacts her parents dig up around the world are put on display and studied. But what her parents can’t see – and what Theodosia can – is the curses and black magic still attached to the ancient pieces. And it’s up to Theo to keep it all under control. Quite a task for an eleven-year-old girl.

Then Theo’s mother brings home the Heart of Egypt – a legendary amulet belonging to an ancient tomb. Theodosia’s skills will certainly be put to the test, for the curse attached to it is so vile and so black, it threatens to bring down the entire British Empire! Theodosia will have to call upon everything she’s ever learned in order to prevent the rising chaos from destroying her country – and herself!

Theodosia Throckmorton is not your average eleven-year-old girl. Gifted with intelligence well beyond her years, Theo practically lives at the Museum of Legends and Antiquities, run by her parents and used as the venue for displaying their archaeological discoveries. But what her parents don’t realize – and what only Theodosia can see – are the ancient curses swirling around the finds that her parents bring back to London. Theo determines to educate herself about the ancient magic so she can neutralize the threats her parents unwittingly awaken when the artifacts are removed from their Egyptian tombs. It’s a thankless job, since her parents – indeed, every adult she encounters – constantly make the mistake of underestimating her capabilities. When her mother returns from her latest expedition with the legendary Heart of Egypt – her most priceless (and dangerous) find yet – Theodosia is thrust into the middle of a web of international conspiracy, warring secret societies, and ancient curses bent on destroying England and unleashing worldwide chaos.

I’ve always loved stories involving Egypt and archaeological digs set during the first half of the 20th century – what can I say, blame Agatha Christie and Indiana Jones. Between Indy’s adventures (and I’m recalling the Young Indiana Jones made-for-TV films) and Christie’s Egyptian-set mysteries, tales about ancient discoveries have never failed to intrigue me. I decided to check out this series when I noticed a friend reading one of the books on GoodReads – with a delightfully named heroine, I knew I had to investigate the series. The Serpents of Chaos is a rollicking, fast-paced introduction to Theodosia’s dangerous, magic-filled world. There’s some merit to likening Theo to Harry Potter – both start out as eleven-year-olds with abilities no one in their families understand. However, Rowling does a better job of fleshing out Potter’s universe in my view. LaFevers dives right into the action and doesn’t let up until the final pages, which makes for a quick read. The pace is only occasionally slowed by a few rather longish descriptions of Egyptian magic or curse “antidotes.” I would’ve liked a little more context to Theo’s life, more of an introduction to her unique skill set and how she came to know so much about magic at such a young age.

Theo’s voice is definitely the highlight of the novel. Impossibly worldly-wise, mature, and funny, Theodosia is an engaging heroine. LaFevers is careful to balance Theo’s extraordinary knowledge with a relatable, heartfelt desire for her to be affirmed and valued by her parents. Theo’s efforts to impress her parents and the scenes between her and her younger brother, Henry, were some of my favorite sections of the book. She’s also a cat lover, which I deeply appreciated. I also loved how Theodosia manages to impress the clandestine organization tasked with protecting England. I can easily see Theo and company playing an important role in magical world events, perhaps leading up to the outbreak of World War I. This novel is sure to appeal to fans of Indiana Jones or the Mummy films, and to anyone who’s ever been enthralled by a museum exhibit. I look forward to seeing how Theodosia juggles appearing to be an average girl with the responsibility of protecting the nation from dark magic threats. It should be a fun ride.
Posted by Unknown at 6:04 PM

This sounds so cute and fun! I want to live in a museum ;)

OOO soudns good. I love that time period/setting as well :)

If either of you check out the book be sure & let me know your thoughts!