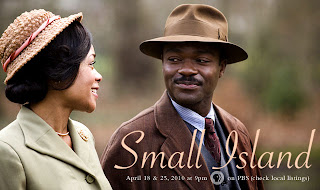 Masterpiece Classic concluded for 2010 on an extraordinarily high note with this adaptation of Andrea Levy’s novel Small Island (which I now HAVE to read!). Small Island is, in many respects, a heart-wrenching story, but it’s made beautiful by the hope and picture of human resiliency and possibility that unfolds on-screen. Here’s the summary of episode two from the PBS website:

Small Island concludes Sunday, April 25, 2010 on MASTERPIECE CLASSIC. Hortense (Naomie Harris) and her husband Gilbert (David Oyelowo) find life in England isn't what they dreamed, but discover much about each other in the process. Queenie (Ruth Wilson, Jane Eyre) witnesses firsthand the travails of her tenants, but is soon drawn into a life-altering situation that will force unthinkable sacrifices. Small Island is based on Andrea Levy's award-winning novel. (90 minutes, TV-MA, S)

My favorite aspect of this half of Small Island is following the developing relationship between Hortense (Naomie Harris) and Gilbert (David Oyelowo). The two were virtual strangers when they married for convenience’s sake, and when Hortense is finally able to join Gilbert in London the two face adjustments and strains to their relationship that neither could have foreseen. This part of the story is where Gilbert’s character really gets the chance to shine. Talk about a stand-up guy – Gilbert is a character who wants to better himself, simply wants the chance make something of himself and succeed – and in the face of overwhelming prejudice the man just refuses to quit. However, this resilience and strength of character doesn’t come without a price, and Oyelowo does a superb job of conveying the full range of Gilbert’s emotions and struggles on-screen.
My sympathy and understanding of Hortense’s character grew tenfold over the course of this episode. She’s a prickly character, with very definite ideas about the world and her place in it. But when she moves to London, and everything familiar is stripped away, you are smacked in the face with the heartbreaking reality that much of what makes Hortense a rather difficult character to like is a defense mechanism. I absolutely loved watching Hortense come to appreciate and care for the man she married, realizing that Gilbert was so much more than just a means to a end, that he was instead a man she could build a life with, who would support her dreams at the expense of his own. Naomie Harris does a brilliant job with her portrayal of Hortense, particularly in how Hortense grows and matures and opens up by the end of this film. The “never say die” spirit you see in both Hortense and Gilbert is truly an inspiration.

As I mentioned in my review of part one, Hortense and Queenie (Ruth Wilson) serve as the anchors of this story. Born in two very different cultures, with very different backgrounds, these two women are revealed to have more in common than either would have ever dreamed. Since her husband Bernard (Bernard Cumberbatch) never returned home when the war ended, Queenie has largely been able to live life on her own terms. Wonderfully free of the prejudices that people like Gilbert and Hortense encounter at every turn, Queenie has been able to cultivate rich friendships and remain rather immune and insulated to how her white neighbors view her interracial relationships. She just doesn’t care – but that starts to change when Michael (Ashley Walters), the black RAF airman whose attentions captivated her during the war, returns and rekindles their affair. When their last encounter results in pregnancy, followed by the unexpected return of Bernard, Queenie is faced with an unfathomable choice. In order to give the one she loves most a future filled with love, she has to come face-to-face with how the prejudices of those who surround her may force her to make an unthinkably difficult sacrifice. Ruth Wilson blew me away with her performance here. The depth of life, emotion, and pain that she brought to bear in the role of Queenie was breath-taking. As an actress she’s proven herself capable of more than I ever gave her credit for – this was a fantastic performance and I look forward to seeing more from her in the future.

A person could probably write a book on the different ways Michael – “the hurricane” – impacted Queenie and Hortense’s lives and changed them forever. In pondering this, I have to conclude that Hortense was definitely blessed by her early separation from Michael’s influence. The differences between Michael’s and Gilbert’s respective characters are like night and day as far as selflessness and consideration are concerned. Though both men faced the same prejudices and obstacles, there’s a lot to learn and digest by observing the way each man let those fires refine and form their characters. And then on the other end of the spectrum you have the button-up Bernard, who makes some tentative steps towards overcoming his prejudices, not because he believes they are inherently wrong, but more out of love for Queenie. Even so, that was a step that was in its own way beautiful to see – because if you make that first step in the right direction, the next can be easier, no? Whether he could have changed more, if given time, or if he was simply too set in his ways is a question that remains unanswered. That said, Cumberbatch plays the difficult role of Bernard very, very well. In a less capable actor’s hands I think it would be easy for Bernard to become a caricature, easily dismissed – but Cumberbatch succeeds, to my mind at any rate, in showing how Bernard is a product of his times, not entirely unsympathetic by any stretch.

Small Island is a beautifully constructed, well-made, thought-provoking film. The characters are the kind that stay with you - you can't help but mull over their situations and choices and responses to situations long after the film ends. I'm so, so glad Masterpiece introduced this powerful story. Small Island could have been a very dark and rather bleak story, but there's so much hope here, so much courage in these characters' lives that quite honestly I came away enriched by the story. Now to make time for the book... ;-)
Posted by Unknown at 3:06 PM

ok so i have to ask, what makes it rating of MA? i see the "s" but how much is there?

@Deborah - The "s" is between Queenie and Michael - during the PBS broadcast you know what's going on but don't really see more than their backs. I don't know if, given the PBS history of editing Masterpiece shows, that the scenes in question are more explicit on the DVD...?