This review was originally posted on my old blog in October 2008. 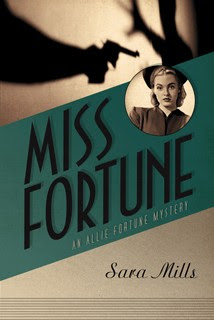 It's 1947 and Allie Fortune is the only female (and perhaps the best) private investigator in New York City.

But she's kept awake at nigh by a mystery of her own - her fiance disappeared in the war and Allie is haunted more by the unknown than by finding out the worst.

Her work is a welcome distraction, and she's just been hired by a client who isn't telling the whole truth. Mary Gordon's claims of innocence don't fit with her ransacked apartment, being shot at, and the two Soviet agents hot on her trail.

Meanwhile the FBI is working the case because a legendary and mysterious treasure has gone missing...again. The only catch for Allie is her new "partner" Jack, an attractive, single agent who knows how to make her smile.

As Allie and Jack chase after the gold, they must contend with the Soviets who also want the priceless treasure back - after all, they stole it fair and square.

Allie Fortune's life is hanging in limbo. David, the only man she ever loved, disappeared in the war. Two years later, still haunted by regrets, Allie is unable to move forward with her life until the mystery of David's disappearance is laid to rest. She's spent years honing her skills as an investigator, building a solid reputation, acquiring contacts, and calling in every favor imaginable in ultimately fruitless attempts to discover David's fate. When Mary Gordon walks through her office door, claiming she's being stalked, little does Allie realize that Mary's duplicity will draw her into a web of deceit and danger that may just give her the opportunity to make peace with her past - but only if she can survive the threats coalescing around her client's dangerous secret.

Miss Fortune is the perfect "marriage" of two of my obsessions - World War II era history and classic film. Allie's adventures pay particular homage to film noir classics like Casablanca and The Maltese Falcon. She's a female version of the "hard-boiled" detective type made famous by Humphrey Bogart in the aforementioned films as well as other detectives who populated 1940s film classics like Laura (and Dana Andrews's unforgettable detective). It's a rare thing to encounter a novel that makes me feel like I'm watching an absorbing film unfold, but Mills has achieved that feat with her debut here. The pages of Miss Fortune drip with atmosphere, and Allie's voice - a combination of smarts, sarcasm, and a touch of world-weariness - is utterly captivating. I appreciated the lack of "preachiness" to the story. The spiritual thread is subtly introduced as Allie gradually comes to realize self-reliance is hindering her life at the expense of protecting her heart. Mills includes tantalizing glimpses of Allie's history with David - just enough to tease the reader into wanting more (prequel, anyone? ). My one quibble with this book is that we don't get to know Jack well enough (however, my fingers are crossed that this will be remedied with the sequel, Miss Match, due to release March 2009 - the story blurb looks promising!). The characterizations, pacing, and dialogue all seamlessly work together to transport the reader into Allie's world of danger and intrigue. Personally I can't wait to make another trip with the sequel.
Posted by Unknown at 5:05 PM