Review: The Sea of Monsters by Rick Riordan 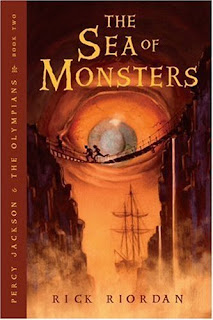 Percy Jackson’s seventh-grade year has been surprisingly quiet. Not a single monster has set foot on his New York prep-school campus. But when an innocent game of dodgeball among Percy and his classmates turns into a death match against an ugly gang of cannibal giants, things get…well, ugly. And the unexpected arrival of his friend Annabeth brings more bad news: the magical borders that protect Camp Half-Blood have been poisoned by a mysterious enemy, and unless a cure is found, the only safe haven for demigods will be destroyed.

In this fresh, funny, and wildly popular follow-up to The Lightning Thief, Percy and his friends must journey into the Sea of Monsters to save their camp. But first, Percy will discover a stunning new secret about his family – one that makes him question whether being claimed as Poseidon’s son is an honor or simply a cruel joke.

Percy Jackson’s second adventure picks up a year after he left Camp Half-Blood, training ground for demigods, discovered he was a son of Poseidon, and successfully averted World War III. The intervening school year has passed strangely without incident, until he’s attacked by man-eating giant monsters culminating in a fight that blows up his school gym – so much for anonymity. Seeking refuge at Camp Half-Blood, he’s shocked to discover that the magic that protects the camp from monster-related threats is being slowly poisoned, leaving all the half-blood children of the gods vulnerable to attack. Worse yet, his best friend, Grover the satyr, is missing, kidnapped by a Cyclops, and his mentor, Chiron the centaur, has been banished from the camp, suspected of traitorous activity. Percy, Annabeth, and his newly-discovered half-brother, Tyson, run away from the camp in search of the one item that could save it – the Golden Fleece and its restorative powers. But others are also after the fleece, with far more sinister purposes in mind, and Percy must use all his ingenuity and powers as a son of the sea god to avert a far greater threat than the destruction of Camp Half-Blood.

The Sea of Monsters is, for the most part, an excellent follow-up to The Lightning Thief, full of just as much adventure, humor, and mythological and real-world mash-ups as its predecessor. Accompanied by Annabeth and Tyson, Percy’s quest to save the camp and rescue Grover is a rollicking, non-stop adventure from start to finish. Pacing-wise, Riordan does an even better job with the action sequences this time around, making The Sea of Monsters an even fast read than the first book in the series. This installment gives liberal nods to Odysseus’s mythological quests, and Riordan infuses the classic story beats with distinctly modern touches. It’s this blending of myth and reality that makes the series so much fun – only in Percy’s world would Hermes bestow useful gifts such as magical multivitamins (instead of protective herbs) or help a hero control the wind by uncapping a thermos.

My only issue with Percy’s second adventure is that for a kid who has only recently discovered he’s half-god, he seems to have resolved many of his issues regarding his parentage rather quickly. Most of the questions Percy raised in The Lightning Thief, or his worries about his non-magical mother coping with the threats facing him as a demigod aren’t really addressed – it just seems a little too quickly resolved. However, in fairness to Percy’s character, he deals with a whole new set of father issues when it’s revealed that his half-brother is a Cyclops (Cyclops generally looked upon poorly by half-bloods). How Percy comes to appreciate and accept a brother so different from himself is one of the novel’s greatest strengths. Luke, Percy’s nemesis, also makes an appearance and reveals more about the power-grabbing schemes only hinted at in The Lightning Thief (and yes, even I have to admit this plot point is VERY Harry Potter-esque). Meeting Luke’s father, Hermes, and gaining that god’s perspective on his wayward son gives Percy a better understanding of his own conflicting feelings about his parent/god relationship, which was nicely done. With a cliffhanger that promises to be a game-changer for Percy and his friends, The Sea of Monsters is another thoroughly entertaining, fast-paced chapter in the Percy Jackson & the Olympians series that will leave you eager to read the next installment.
Posted by Unknown at 12:14 PM

I read the entire Percy Jackson series in a week... which isn't saying much since they're not thick books or a hard read, just pure entertainment, which is just what I need some times!
Anyway, THANKS for suggesting this fun series. My favorite thing about it overall is that it's written in first person. Not only does this add tons of humor, but we get to know Percy's voice well.

@Nat - These are very fast reads, aren't they? I may get through the rest of the series by the time the movie comes out on the 12th. Anyway, I agree - these are just fun, escapist entertainment. And you are welcome - so glad you enjoyed them too!